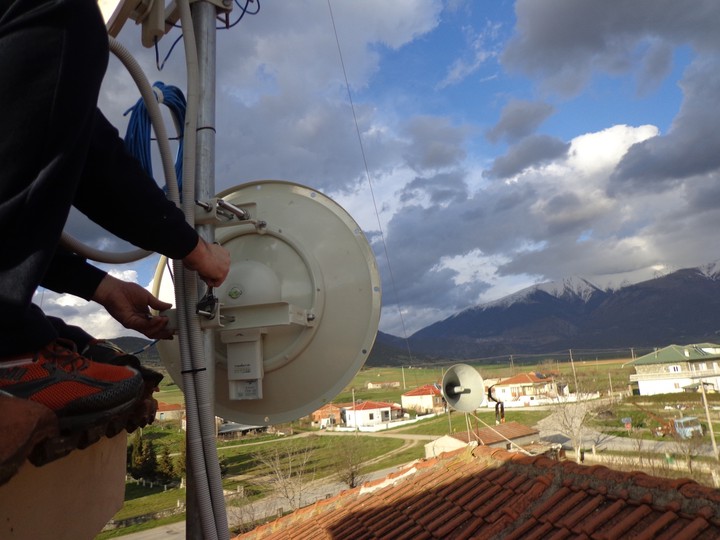 Sarantaporo.gr is a non-profit organization that aims to revitalize communities by providing Internet connectivity and technology education in rural Greece. Officially established in 2013, the organization has grown from connecting the mountain village of Sarantaporo to providing high-speed Wi-Fi to residents, organizations, and visitors in 15 different villages in the area. With volunteer labor, a number of grants, and a longstanding partnership with the University of Applied Sciences of Thessaly, Sarantaporo.gr NPO works to help villagers incorporate connectivity into their daily lives. The organization endeavors to foster a community-oriented mindset in order to ensure the sustainability of the initiative, and conceives the Internet as a commons.

Located to the west of Mount Olympus, Sarantaporo is a mountainous, sparsely populated village of 570 citizens. Sarantaporo is located almost 40 miles from the nearest city, Larissa, and is almost 120 miles southwest of the major Greek city of Thessaloniki. The primary vocations in the village are agriculture and animal husbandry. The area’s remoteness has made it a market failure area; as a result, telecommunications companies are unwilling to invest in infrastructure with no potential for profitability. The local authorities also failed to provide such services for their citizens.

In 2010, a small group of young people who had grown up in or belonged to the village of Sarantaporo decided to help their village connect to the Internet. They sought to improve the quality of life and social cohesion among inhabitants of rural areas that suffered from increased isolation due to economic crises and ongoing digitization in metropolitan areas. With no experience in information technology (IT) or telecommunications, they reached out to open-source connectivity communities and applied to the local Greek Free/Open Source Software Society grants for hardware. They received the grant and installed the first mesh routers in their village, providing open local connectivity for all for the first time.

Word spread, and the project expanded to 14 other villages in the surrounding region. In addition to the founding team, a number of volunteers with no connection to the villages joined the project out of a sense of social reasonability and outreach. Through the participation in the 7^th^ Research Framework Programme (FP7) European research project, the group secured € 90,000 (US$ 104,836.50) to solidify the network in 2014, interconnected all the villages, and partnered with the University of Applied Sciences of Thessaly (60 kilometers away), which provided Internet bandwidth pro bono to the community network as a social responsibility toward the surrounding communities.

Today, the project maintains its operations with low overhead due to a robust network of volunteers, financial donations from citizens and the communities themselves, participation in research projects such as CONFINE (a European FP7 project), grants from organizations such as The People’s Trust, and support from organizations like the Greek Free/Open-Source Software Society. Sarantaporo.gr NPO effected a change in their financial operations in 2015, when the difficulty of securing the necessary community contributions to the equipment and maintenance costs became unsustainable. The organization deputized “node owners, adopters, and volunteers” as the main financial contributors to the network. These villagers, who have volunteered to host the equipment necessary for the village to enjoy free local connectivity, donate an annual subscription fee to Sarantaporo.gr NPO. These node owners are responsible for soliciting financial contributions to the system from their own community, which requires a certain level of community organizing and future-oriented thinking. As of now, the project does not have a sustainable business model but they are exploring how to involve the community more to sustain the network.

Sarantaporo.gr NPO continues the endeavor to strengthen the 15 communities through Internet connectivity, and is looking to further expand their network in the region. For the past three decades, the villages have suffered from severe population decline due to young people leaving for opportunities in Greek cities and abroad. With Internet connectivity, children and grandchildren return to visit their elderly relatives in the villages more often and for longer. In addition, as residents learn to use online communication tools such as Skype, they are able to stay in regular contact with family and friends abroad.

By using Internet study tools and an online course, a female student from Flambouro village excelled in the national university exam and enrolled in medical school, a first for the region. This prestigious achievement was more than just personal – Sarantaporo.gr NPO stresses the inspirational power of her success to other villagers who now feel motivated to pursue their ambitions. Further, Farmers have used the Internet to find direct markets for their crops in the region, eliminating intermediaries in trade, bringing increased profits, and selling at lower prices to consumers.

The Greek Ministry of Health has digitized its drug prescription system. This means that before the villagers had access to the Internet, these elderly residents needed either to pay a great deal of money out-of-pocket, or travel 30 km or more to a city where they could get their medicine prescribed. Though these villages receive visits from a traveling doctor once-a-week, their medical care has been greatly improved by the new ease of getting their prescriptions.

These villages are largely farmland and often employ migrant laborers from neighboring countries, such as Albania and Bulgaria. Sarantaporo.gr NPO reports improved quality of life for these foreign workers, who are now able to stay in touch with their families and friends at home, where before they were greatly isolated by language barriers and long workdays in the fields. Other residents report greater quality of life due to social media decreasing their sense of isolation.

Remote administration – None of the volunteers who run the organization are residents of the villages they serve. While many live in neighboring urban areas of the region, some of them live as far away as Athens (450 km away). The age and background of the inhabitants of these villages often requires face-to-face communication from the organization, which cannot be provided as often as the organization would like. They hope in the near future to be able to hire two full-time administrators who will work in the region, be more available, and better equipped to continuously serve the area’s needs.

Engaging elderly users – The majority of the villagers are older people. While they are increasingly learning to enjoy the opportunities and benefits of Internet connectivity, they are generally not tech-savvy.

Sustaining community contributions – Sarantaporo.gr NPO reports that they have problems with some villagers, even under the new community financing model, refusing to contribute and then discouraging others from “foolishly” giving their money away, thinking that the project is well-funded enough to do without their money.

Lack of quantifiable data – Sarantaporo.gr NPO has strong anecdotal evidence for the success of their program. They have not introduced any initiatives to quantify their data, however; thus, they have somewhat limited evidence to share about the strength of their initiative.

Commons-based approaches can work – Sarantaporo.gr NPO notes that successful and sustainable networks are often the product of successful and sustainable communities. Their mantra of sorts is: “There is no such thing as free Internet.” Even without charging residents for bandwidth, they demonstrated the utility of garnering community interest in and understanding of the way infrastructure and connectivity must be maintained. Their experience suggests that local organizations looking to find sustainable solutions to maintain their newly implemented networks may want to focus on methods to incentivize active participation in the program. Sarantaporo.gr NPO credits their sustainability to their ethos of changing consumer mindsets into active community-building mindsets.

Visibility efforts to engage stakeholders help solicit support – Sarantaporo.gr NPO puts effort into the public documentation of their progress and successes. They publicize widely on the Internet, and they pursue strong relationships with well-chosen foundations and institutions. They maintain an active web presence, and their YouTube channel hosts an hour-long documentary on the program’s success. These public-oriented gestures help the organization sustain a high profile and solicit financial contributions.

Community network interventions can help bridge gaps in access when other actors do not step up – Community-based initiatives such as this one are helpful in countries where governments digitize welfare infrastructure (e.g., drug prescriptions) without assuring that all of its citizens have access to the Internet. In areas where private telecommunications companies have no profit incentive to provide connectivity, outside intervention may be required. Without government aid, community and nonprofit organizations can helpfully fill this gap, though an appeal to government support in cases such as these is justified.