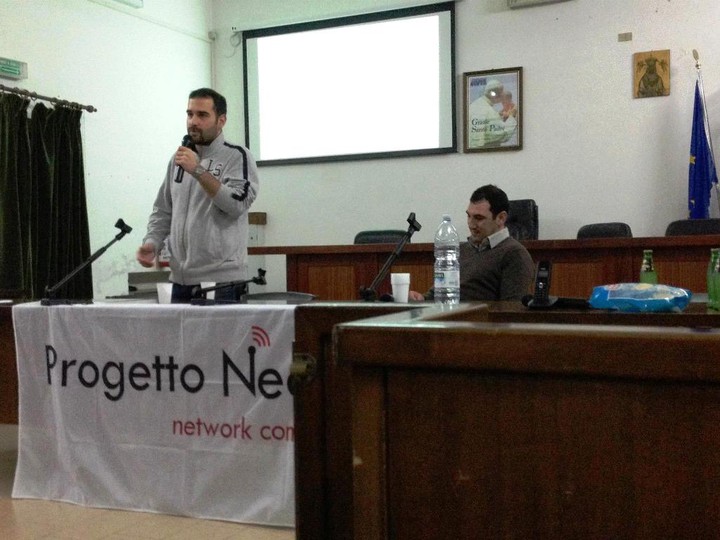 Progetto Neco is a project by a group of private citizens who created a metropolitan area network (MAN) to bring “entry-level” Wi-Fi connectivity to the urban center of Vietri di Potenza, Italy since 2008. Progetto Neco uses 36 nodes on a point-to-point infrastructure network to connect 230 families. In addition, following the completion of the necessary infrastructure for the network backbone, Progetto Neco expanded its services to include file and torrent sharing, voice over Internet Protocol (VoIP) telephony, and a dedicated gaming server for local area network (LAN)-type play. Progetto Neco is an example of a low capital expenditure, nonprofit community network backbone that provides connectivity and other services whose expansion is impeded by lack of funds and manpower.

Potenza is the capital of the Potenza Province, which lies in the southern Basilicata region of Italy. While there are a few telecommunications providers in the area, their prices are relatively high and the connection speeds range from 15-30 megabits per second (Mbps). In 2015, while coverage of ultrafast 30 Mbps broadband amounted to 43.9 percent, the coverage of ultrafast 100 Mbps broadband totaled 0. Ultrafast broadband can be delivered both by fiber-to-the-home (FTTP) or cable. Ultrafast 100 Mbps broadband is predicted to cover 20 percent of the region by 2018 and 20.7 percent by 2020, while coverage for 30 Mbps broadband is expected to reach 100 percent. The number of public Wi-Fi spots has grown considerably in recent years as well to more than 5,000; however, high prices and weak speeds leave the majority of households and businesses with limited Internet use.

Progetto Neco was initiated by six private citizens, who in 2008, came together to provide a nonprofit wireless network for the urban center of the Italian city Vietri di Potenza (“Neco” being shorthand for network community). They created a Metropolitan Area Network (MAN) because there was no broadband at all when the project began – the only available connection was 56 kilobit analog technology. They imported bandwidth from another city, where there was xDSL coverage (max 7 Mbps). At the end of 2010, ADSL became available in Vietri di Potenza and they subscribed, gaining seven xDSL lines and engaged in “channel bonding” (ML-PPP) in order to get a single logic channel with 48 Mbps to share with end users. As of late 2017, they received an upgrade in September 2017 from ASDL to VDSL2, so they currently have 250 Mbps connections.

Due the amount of traffic that the network can carry, they opted for point-to-point infrastructure instead of a point-to-multipoint set up. Each node has at least two radio interfaces, one to connect to the network and a second or more to extend it to new nodes.

Technologically, Progetto Neco uses OpenWRT as an operating system for the nodes, Linux for networking affordances, and OSLR as the routing protocol. The initial investment and annual cost is approximately US$ 30,000 and in turn, Progetto Neco provides service to customers for US$ 120 a year.

Progetto Neco has been successful in its endeavor, and the network continues to function – with the organization functioning as a nonprofit WISP for the community of Vietri di Potenza. In addition to providing wireless hotspots, 230 households use the network to connect to the Internet. Due to Progetto Neco’s low price-point for service, consumers save approximately US$ 600 a year. In cases where a consumer cannot afford to pay for the service, its nonprofit nature allows for these customers to receive services for free.

Once the wireless network backbone was in-place, Progetto Neco expanded its offerings to end users by exploiting the network’s capabilities as much as possible. These expansions include 2 terabytes for storing files, along with indexes to make them shareable. Through the Ajaxplorer web interface, users can listen to audio files, run other types of media, and edit text documents uploaded by themselves or other users. Users are able to use the Neco server for peer-to-peer (P2P) torrent downloads, thereby freeing up disk space. In doing so, users can save some wear-and-tear on their firmware as well as consuming less electricity overall than in traditional P2P clients. Progetto Neco is testing VoIP service to its users. When complete, each user will receive an individual phone number and be able to make free calls.

Lack of resources – The primary challenge for Progretto Neco at its launch was a lack of funds. The organization was able to alleviate this concern via donations from the founders; however, expansion is impossible without outside funding or an angel donor. Skilled manpower is also a challenge. Progetto Neco is unable to create network backbones in other locations because they lack the voluntary labor needed for setup and maintenance.

Limited bandwidth capacity – Progetto Neco needs to re-use channels for optimal spectrum utilization. Most of the channels are already crowded by other WISPs, and spectrum squatting by other WISPs.

Providing a proof of concept is a first step – The MAN implemented by Progetto Neco demonstrates a proof of concept. With a low capital expenditures and willing volunteers, it is possible to construct and maintain a nonprofit WISP over a small, metropolitan area. However, scalability and sustained funding sources are required for long-term success.