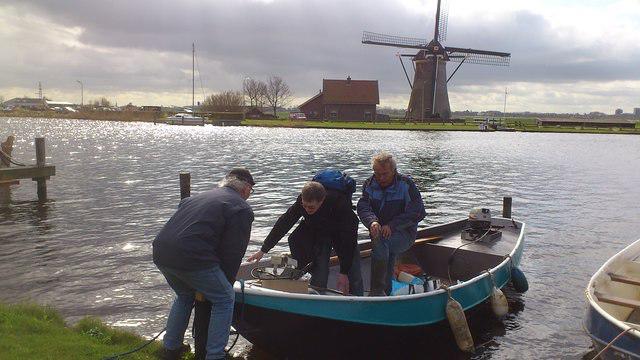 Wireless Leiden has been a nonprofit provider of open-source, wireless networking since 2002 in the Netherlands. As of 2017, Wireless Leiden estimates 110 wireless servers have been installed in an area stretching from Amsterdam to Delft. One of the first community Wi-Fi networks of its kind, Wireless Leiden is run by volunteers and financed by local sponsors. Wireless Leiden presents a case that it is possible to build a community wireless network with the use of relatively low-cost technologies and open source software despite the technical problems, loosely-connected volunteers, or limited government support.

Wireless Leiden is based in Leiden, a city and municipality in South Holland, the Netherlands. The city of Leiden and its surroundings is spread across 25 square kilometers, which is mostly flat with no geographical challenges. The population is approximately 123,000, while the population of the entire Leiden urban area is approximately 350,000. The average income per household is more than $27,000 per year.

According to an Internet inclusivity survey conducted by The Economist, the Netherlands scores high overall with regards to Internet inclusivity and availability. This is due, at least in part, to widespread 4G telecommunications service coverage and relatively high fixed broadband and mobile subscription rates – at 41.73 per 100 people and 124 per 100 people, respectively.

Wireless Leiden is a nonprofit organization that builds and maintains an open-source wireless network in western Netherlands. It has been operational since 2002, and its services are intended for populations whose access to regular Internet connectivity is difficult or impossible. In many cases, this means the target population is rural. In other cases, the target population is itinerant (e.g., students, boaters, or campers), or temporary (e.g., those whose regular Internet connection is down). As Internet infrastructure has become more readily available, they have more intentionally focused on providing Internet to low-income users.

Wireless Leiden capitalizes on the 13 radio channels that operate within the 2.4-gigahertz (GHz) frequency band, which are allocated within the Netherlands for radio local area networks. The network is local, but does provide the possibility to connect to the Internet. It operates via interconnected wireless servers to which individual users connect via antennae and USB Wi-Fi adaptor. This significantly decreases monthly or other regularly operational costs, making it very cost-effective. The nodes are placed at strategic locations based on the needs of the users, local institutions and architecture. Individual users are responsible for procuring and building their own connection hardware.

Wireless Leiden has no government affiliation or subsidy, but instead partners with patrons in order to provide connectivity as no cost to most of its users. It relies entirely on volunteer labor and expertise, and makes extensive use of community resources, corporate sponsorships, and institutional partnerships. Wireless Leiden also attempted to set up a network set-up in rural Turkey.

By identifying win-win opportunities for the material and social benefits of wireless connectivity, Wireless Leiden effectively networks disparate social groups and institutions in order to provide wide-ranging benefits. For example, wealthy members of a yachting marina wanted Internet access in a remote location where Internet cables had not been installed. By connecting the financial capital of the wealthy yacht owners with the willingness of a local church to host the servers (at the yachters’ cost), Wireless Leiden was able to provide free wireless connectivity to the surrounding local village. In another instance, the Heineken brewery provided free hosting and antennae placement on their relatively tall infrastructure in exchange for advertising. Wireless Leiden also has ongoing partnerships with the local university, in which students use the networks to develop projects and software beneficial to their studies, the community, and Wireless Leiden itself.

Wireless Leiden’ emphasis on open, local connectivity led users overwhelmingly to use the local network to then access a connection to the Internet. The ability to survey remote areas or outposts via webcam is also a valuable social, economic, and environmental resource for those living and working in rural areas and occupations. For instance, webcams allows farmers to keep an eye on their crops and tulip gardens. Moreover, connectivity enables fishermen and anglers to check out the weather conditions and plan their trips.

Volunteers – Wireless Leiden is completely volunteer-run and organized. While this has kept costs low, it has also presented challenges. Each project is motivated by a volunteer willing to take on the labor of that project. This means that connectivity is dependent on the whims of volunteers and thus the spread of the network is ad-hoc, without overarching logic or priority. Finally, with the increasing need for volunteers due to growth of the network, it becomes difficult to manage them who come with their own system of doing things.

Physical maintenance – As the network grows, so do challenges to maintaining its physical components. While Wireless Leiden has a very effective update and troubleshooting system for its software components, the network’s dependence on wireless servers requires maintenance visits every so often – at a minimum, once every two years. The lack of a regular workforce with adequate skills means that this maintenance is difficult to accomplish and thus poses challenges to the growing network’s sustainability within the limits of Wireless Leiden’ current structure of operations.

Security – The network is completely unsecured at the network infrastructure level, with individual users responsible for their Internet security and protection. Leiden Wireless maintains, “Security is the responsibility of the user.” This leaves users, especially those with little knowledge or experience of how or why their privacy might be compromised on the Internet, vulnerable to surveillance or phishing, for example.

Facilitation is key – While they handle all the labor of server installation and implementation, Wireless Leiden’s main activity is facilitation. The organization emphasizes connecting demand with supply in areas that lack infrastructural development by Internet providers.

Diversity in expertise may help in the long term – A successful project launch of this kind may benefit from carefully assembling a sufficiently diverse team of experts. Wireless Leiden sought out experts who could speak to each integral component of the project: computer software and hardware, “radio amateurs” with expertise in antennae building and placement, database managers and information technology professionals, and those with experience in industrial relations and business. Wireless Leiden reports that similar projects beginning around the same time (in San Francisco, California, Portland, Oregon, and Seattle, Washington) relied too heavily on the experience and oversight of software developers alone and failed to establish a sustainable network.

Scalablity should be baked in from the start – Significant to this project’s success is their emphasis on accurate documentation and good database management. From its small-scale beginnings in 2002, Wireless Leiden was immediately advised of the importance of standardizing both software and hardware. They began their organization with a well-organized central database and a robust monitoring method for rapid long-distance troubleshooting, and thus were able to sustainably grow the network. From this case, however, it is clearly apparent that it is important to also create an equally sustainable method of physical maintenance for widespread hardware components.

Community involvement is key – This case presents an example of what it takes to build a community wireless network despite the lack of government support or funding. As the maintenance challenges of their network’s spread continue, however, it may be advisable to seek some form of partnership with government programs in order to address the long-term needs of sustaining wireless servers. In addition, government involvement in planning a project of this type may be more or less advisable depending on the country in question, geographic conditions, available resources, Internet policies or non-community oriented cultures. For instance, Wireless Leiden’ attempted network set-up in rural Turkey was only successful until the Turkish government intervened, objecting to a private network alternative to local corporations and state-controlled communications (phone, Internet, etc.). Wireless Leiden’s methods present a potentially compelling case for freedom of communication in contexts where the state may have strong financial and/or political interest in centralized communication infrastructures.