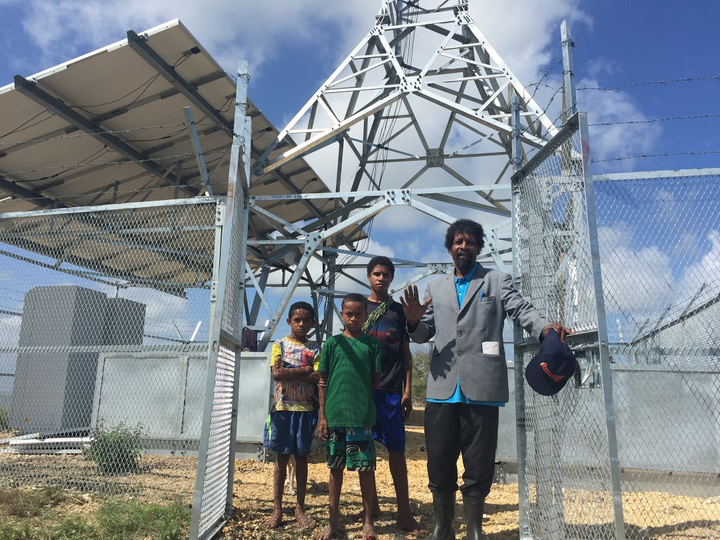 A tower in Kore. Photo credit: The World Bank Group

In 2009, only 20 percent of Papua New Guineans had access to cellular coverage, with a majority of the 80 percent that live in rural areas having no access of any kind. High prices and limited investment in access networks kept service delivery quite low. Total teledensity was just 4 percent countrywide. Since the privatization of this market in 2007 with the entry of Digicel and GreenCom, the country has seen some gains in coverage and access. While service providers have embarked on a network rollout for more citizens, many remote areas remained unserved or underserved.

The Rural Communications Project was envisaged to provide Internet connectivity for rural and remote areas. Financed by the World Bank and managed by the National ICT Authority of Papua New Guinea, the Rural Communications Project has deployed mobile base stations in 59 sites in remote areas in all four regions of the country, providing basic telecom services to about 500,000 Papua New Guineans. A one-time subsidy has been provided to the telecom operator Digicel in order to set up these stations.

The project also technical assistance to the National Information and Communications Technology Authority (NICTA) to address emerging regulatory challenges and to strengthen the competitiveness of the telecommunications market. The World Bank also coordinates with the Department of Communication and Information (DCI) to enable ICT policy development and establish a universal access and service (UAS).

The stations are often coupled with solar-powered charging stations to allow people to charge their cell phones in areas with minimal electricity.

The World Bank has invested a total of US$ 15 million in this project since 2009. Combined with existing investments by mobile operators, the project is expected to boost total population coverage to over 90 percent by the end of 2015.

The benefits of rural connectivity are felt acutely in villages like Kore, which previously had no access to any form of telecommunications services. Initially, villagers had to climb up a hill to receive weak mobile signals from a cell phone tower in Hula 25 kilometers away. The establishment of a base station in Kore allows farmers to order seeds and fertilizers using a cell phone instead of spending the extended time needed to travel to Port Moresby. Women entrepreneurs have started selling prepaid top-up cards to the villagers and set up solar-based charging stations for mobile phones. Access to services enhances economic opportunities for these communities.

One of the significant advances has been in emergency service delivery. Mobile phone services allow for people in unconnected areas to reach medical assistance far quicker, saving many lives.

By August 2017, the project aims to contribute to many social and economic development objectives of the country. Local businesses are expected to experience lower communications costs and improved access to information about markets and prices as well as ICT-enabled entrepreneurship, and new services such as e-commerce platforms and Internet cafes.

Challenging terrain - Access levels in Papua New Guinea are among the lowest in the world, with fixed broadband penetration still below 1 percent and overall Internet penetration at around 20 percent of the population in 2009. The terrain makes deployment of traditional infrastructure over vast swatches of the country very difficult.

High cost of backhaul- Connectivity in the islands of Papua New Guinea is well outside the range of small businesses and individuals, both due to capacity constraints on fiber availability as well the lack of high-capacity domestic backbone networks.

Traditional telecommunications infrastructure can transform rural lives – Telecommunications can provide people access to economic opportunities in a country like Papua New Guinea and reduce transaction costs for low-income families to carry out activities for their daily subsistence.

Connectivity gains through installation of cell towers can be cost effective - In Papua New Guinea, connectivity rose from 20 percent to nearly 90 percent in six years for an investment of US$ 15 million. Women are better able to reap the benefits of connectivity, through access to entrepreneurship opportunities in the digital economy.