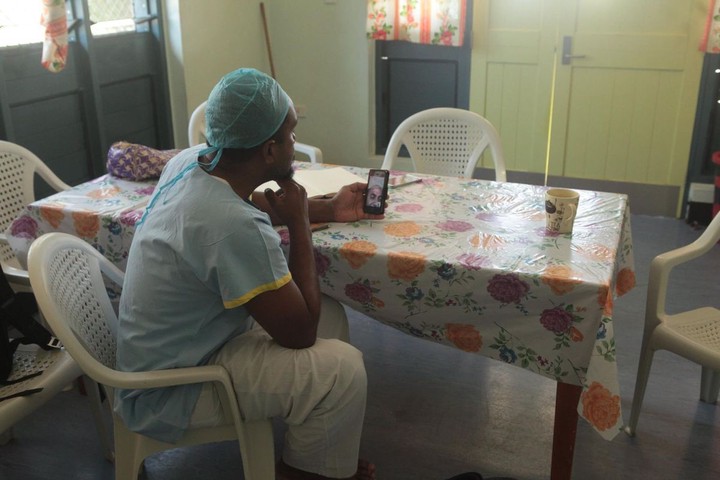 A doctor using VITAL to connect to the clinic in Naviso. Photo credit: Alexis Cullen

The Vanuatu Inter-Island Telemedicine and Learning (VITAL) Network Project began in the geographically isolated and remote village of Naviso on Maewo Island. A community with no cellular network successfully advocated for Internet access to communicate with doctors at a hospital in Luganville, on Santo Island. Leveraging a multi-stakeholder approach, in less than six months, two villages have engaged with doctors over 1,250 times and have helped 32 patients. This includes six life-threatening cases involving mothers and children, and ten patients who would have been permanently disabled without intervention.

Vanuatu is a linguistically and culturally diverse island nation with rugged terrain separating villages on each of its 65 inhabited islands. This geographic isolation leads to a lack of timely health data reporting back to the government, in the cases it can be captured at all.

Vanuatu ranks 125th of 187 countries on the Human Development Index, with high maternal and infant mortality rates. Inter-island travel is prohibitively expensive and at times impossible owing to weather and infrequent transport. Telemedicine is therefore a natural choice to help meet the healthcare needs of its population

VITAL harnessed the efforts made by the local communities of Maewo Island to provide Internet connectivity to their villages. The Vanuatu Office of the Government Chief Information Officer (OGCIO) and the office of the Telecommunications and Radiocommunications Regulator (TRR) offered free technical assistance and support. Kacific Broadband Satellites provides satellite internet connectivity for the communities in order to facilitate telemedicine and eHealth.

While researching solutions for the communities’ expressed need to access telecommunications for healthcare, they worked with myriad people and organizations in order to design and implement the project. They developed partnerships with a United States Peace Corps Volunteer, and then expanded to reach out to India’s Aravind Eye Care System, researchers at the University of Michigan, and network engineers in New Zealand and Australia. Government and non-governmental agencies within Vanuatu offered resources, expertise and advice, and partnered directly with the communities to implement an effective communication system for healthcare workers at all levels.

The community successfully fundraised and paid for all installation fees as well as carried the equipment to site using the only means of transport available: by foot-path, over a mountain, carrying the equipment on their backs.

The goal of VITAL is to connect primary healthcare workers on Maewo, a remote island in Vanuatu, to doctors at the Luganville referral hospital located on Santo Island, via the internet. A partnership between the communities and the Government of Vanuatu enabled this goal. High-speed Internet connectivity facilitates video conferencing between doctors and primary healthcare workers, which enables speedy diagnosis and care for islanders. Since the launch of the project in October 2016, primary healthcare workers have been trained to use solar-powered tablets and have improved health outcomes through over 1250 interactions to solve routine and life-threatening cases alike.

VITAL provided essential medical advice to help care for 32 patients including six life-threatening cases involving mothers and children. These numbers, when viewed in the context of the project which covered half the island’s total population of 3,569 people are significant wins that the project has achieved in the last six months.

Despite no digital literacy, primary healthcare workers were trained in three days to use a tablet to initiate a video conference via the Internet with a doctor at the referral hospital. With little supervision and prompting, communications rose over 1000%. A Facebook group conversation included all the remote health workers in the connected areas to three doctors from the referral hospital who helped handle cases. The Facebook platform integrated in their daily routines and has been utilised over a 1,000 times. Emojis were used to convey emotion and feelings of the health staff as they interacted.

One of the patients who was helped using the VITAL network was a child under five with severe diarrhea and acute malnutrition. This was a life-threatening case, but telemedicine services enabled the doctor to guide the nurse and continuously monitor progress until the diarrhea ended and the child was stable and regained his strength through adequate nourishment.

Through the course of the VITAL Project, 56 per cent of the patients served were female. In addition, women in Vanuatu do not have financial autonomy. The gendered economic disparity makes it more difficult for women to access financial resources or convince patriarchs to spend money on healthcare, especially as transportation costs for expert care at a nearby urban center can be cost prohibitive. Through the VITAL network, specialists can provide localised care that lowers financial burdens. This helps to close the gap between men and women in their ability to access care.

Technological challenges – Finding an application specific to the needs of the community for telemedicine proved to be difficult. The application selected for the project was a Health Insurance Portability and Accountability Act (HIPAA) compliant messenger and video telehealth platform. While in theory the application should have worked, it did not load effectively on the available satellite network connection in the two villages. The project managers chose to implement Skype in the interim while working with a developer to address the problem. The healthcare workers naturally gravitated to Facebook as a means of communication upon deployment of the project.

Socioeconomic factors – A lack of trust in the national healthcare system influenced patients’ receptiveness to health resources and medical recommendations. There were two specific cases in implementing this program where limited financial means and fear of the healthcare system proved significant hurdles for patients.

Careful analysis of the VITAL Project is enabling data-driven decision making to expand ICT utilization to improve health outcomes – VITAL seeks to leverage experience and evidence-based analysis to affordably and sustainably expand access to healthcare so that no remote place suffers from preventable deaths and disability, or primary healthcare worker burnout due to lack of adequate resources.

Mitchell, R. (2016, 26 August) Connecting to the Internet for the first time in Maewo, APNIC Blog