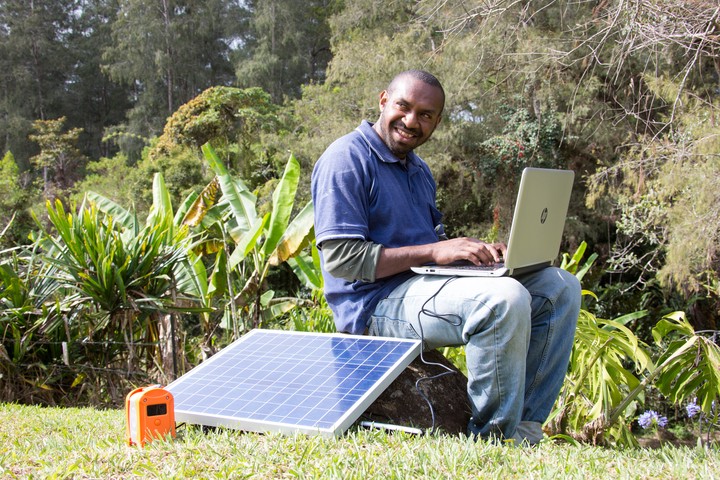 Agriculture is the primary sector in Papua New Guinea’s economy, contributing to approximately a quarter of the gross domestic product (GDP), according to PricewaterhouseCoopers (PwC). The sector engages most of the labor force (the majority of which is informal), and supplies the livelihood of 85 percent of the rural population, according to the World Bank). Most people (87 percent) in PNG also live in rural areas.

Although the majority of men and women work as farmers, they have to face many challenges in creating an information network among themselves. Some of these challenges include low mobile phone and Internet penetration rates (47 percent and 7.9 percent in urban and rural areas, respectively), high Internet costs, geographic challenges due to mountainous islands, diverse cultures, and a low literacy rate (of 63.4 percent).

The Government of PNG has strived to improve the situation. In 2007, the government allowed Digicel, the Caribbean mobile phone company, to enter the PNG market and compete with the state-owned company. This led to the rapid expansion of mobile phone usage in PNG. Digicel partnered with the Fresh Produce Development Agency to launch the Mobile Market Information Service in October 2009 that provides market updates of fresh produce to smallholder farmers and other players in the value chain. Additionally, PNG’s $15 million, World Bank-funded Rural Communications Project is being managed by the PNG National ICT Authority with the goal of improving access to ICT infrastructure and services for the rural population.

The project worked with eight Fairtrade farming cooperatives in PNG across six provinces – in the areas of Jiwaka, Western Highlands, Eastern Highlands, Chimbu, Madang, and Morobe. Of these eight cooperatives, seven are coffee cooperatives, and one of them is cocoa. The project implemented mobile solar-powered charging stations in each community and equipped the cooperatives with a suite of office supplies, including a laptop, printer, camera, and smartphones with unlimited closed group communication plans that facilitatedcommunication among farmers and between farmers and buyers, suppliers, and distributors. It also included a weekly radio program on PNG’s national radio station about Fairtrade; and training on basic computer literacy conducted by PNG’s University of Technology (UNITECH).

UNITECH developed training materials and conducted workshops on basic technical skills. It trained 400 farmers in six villages for three-to-four full days in basic computer literacy. In addition to ICT support, equipment, and training, Fairtrade ANZ also created a radio program ‘Toktok Fairtrade’ (Talk Fairtrade) with 24 episodes about various Fairtrade-related topics for the national broadcasting channel to facilitate communication among and between farmers and buyers. As of 2017, more than 25,000 people (farmers and their families) benefitted from the project.

Implementation was supported by a number of leading partners including the International Finance Corporation (IFC), the Coffee Industry Corporation (CIC), Digicel PNG, and UNITECH, enabling greater impact through an extended reach and shared support mechanisms.

Digicel, with support from the New Zealand government and the IFC, launched a trial of solar charging stations for mobile phone users in Papua New Guinea before the commencement of this project. The first Digicel solar-charging station was installed at Hula, a village two hours from the capital, Port Moresby, and was a success. Digicel has installed close to 500 stations scattered across rural areas since, allowing 500,000 people in isolated parts of PNG to connect with family and friends, as well as to do business. The solar stations are partly owned by community members in each region.

The Fairtrade ANZ project commenced in November 2013, and was completed in June 2016. The overall goal of the IFAD-funded project was to contribute to poverty reduction and livelihood improvement among Fairtrade ANZ-certified and advanced pre-applicant groups in PNG by facilitating communication among farmers, farmer groups, their exporters, and with consumers as they build their own producer to consumer relations. The primary aim was to support the development of efficient and effective communication systems for the target farmer groups so that they are able to improve their ability to conduct their agricultural businesses.

In its first year, from November 2013 to December 2014, the project engaged the IFC to build on its research on ICT services available in PNG, with a focus on recommending suitable interventions for Fairtrade ANZ’s target cocoa and coffee producer groups. They built on the partnership with IFC’s Sustainable Business Advisory and Investment Services departments, which led to greater benefits for target groups around improved mobile coverage, solar charging stations, and solar charging devices. Fairtrade ANZ held two stakeholder consultation processes to ensure engagement and uptake of target groups and other stakeholders, and conducted target group-specific analyses of communication strengths and weaknesses as well as potential interventions to be undertaken through the project.

In the second year, from January to October 2015, the project continued to liaise with the IFC around Digicel services, and recommended solar charging device distributors. They finalized the selection of trial interventions in consultation with target groups, and finalized all negotiations with service providers. They launched a trial period of all ICT interventions, including initial trainings, at the Fairtrade ANZ Stakeholders Workshop in August 2015. They provided ongoing desk support to target groups, including identifying potential supplementary interventions such as mobile Internet dongles and signal boosters to extend and quicken Internet connectivity.

In the final year of the project, from November 2015 to June 2016, they launched and broadcasted the Toktok Fairtrade radio program with PNG’s National Broadcasting Corporation – 10-12-minute segments on issues related to Fairtrade farming and distribution. They developed a partnership with UNITECH to develop textbook and video computer training modules in Tok Pisin and English, and successfully rolled-out village-based ICT trainings for target groups. They extended interventions to an additional two target groups, and rolled out the final ICT interventions. They held a closing workshop and conducted a participatory evaluation of the IFAD-funded project with target groups and partner organizations, identifying key benefits and future ICT opportunities. Lastly, they developed educational and promotional videos, demonstrating the reach and impact of the IFAD-funded project.

Fairtrade producers now have stronger connections within their organizations, with their network of fair trade producers in PNG and the Pacific, with their supply chain partners, and with support organizations, including Fairtrade ANZ. Beyond the direct outcomes of this project, the pilot contributed to the wider sustainability of rural communities in PNG. Access to communication leads to increased security for women and children, ICT trainings target broader learning gaps for farmers and their communities, and investment in solar technology encourages producer organizations to plan for greater investment in clean energy consumption.

Through this project, Fairtrade producers were actors in their own development, identifying opportunities for growth and strengthening, and taking the lead in trailing new technology among their communities. They are now positioned to plan and develop new and more profitable enterprises leveraged through ICT solutions, building on better information about markets and collaboration with other actors in the supply chain.

At the end of the project, 80 percent of partner cooperatives chose to continue the use of the voice and data services offered by Digicel through their own resources, demonstrating the successful uptake of ICT interventions. Access to ICTs has improved cooperatives’ connections to their market, enabling new relationships between cooperatives and their buyers – both their exporters in country, and their importers and roasters or manufacturers overseas. A more direct relationship with the market, through improved ICT capacity of cooperatives, results in efficient relay of information in regards to shipments, quality, weather, and timings, preparing farmers for economic, social, and environmental shocks and potential disasters.

Finding service providers – Freelance information technology (IT) training organizers contracted to conduct farmer training on basic computer literacy dropped out midway through the project, causing implementation delays. There were also delays due to the difficulty of securing reliable service providers.

Remoteness of farmers – Reaching farmers to train them and provide supplies is difficult due to the remote location and limited infrastructure. Before the project had been implemented, the communications networks to communicate with farmers were not in place; thus, communicating with them was difficult.

Lack of infrastructure – Electricity is often not available in the rural farming communities. A basic power supply is a prerequisite to having ICT access. In this case, some farmers had mobile phones but no way to charge them.

Consult farmers – The original project concept and funding was to provide mobile phones to farmers. Yet, consultations revealed that a majority of farmers already have mobile phones, and what they really need is stable electricity supply to charge their phones and devices. Running out of phone credits, a lack of an email address, and limited or no internet accessibility were also pressing problems too. Consultations allowed the funding to be allocated more productively, and it also facilitated the development of a local oversight board that could oversee project implementation and facilitation.

Working with local university is beneficial – Locating reliable freelance IT trainers proved impossible. Partnering with the local technical university, UNITECH, was a positive solution to generate consistent training protocols and local relationships to sustain the project and maintain consistency in implementation.

Solar power can be a useful tool – In circumstances where infrastructural development is slow, prohibitively expensive, or otherwise not possible, new technologies like solar panels can help close the digital divide by simply supplying rural communities with reliable electricity.

Sustainability considerations are essential – The project goal was to put the tools in place to generate a self-sustaining industry and community infrastructure. The project was meant to be superseded once its implementation became self-sustaining, so the limited funding was taken as a premise and used as a motivation for the design and scope of the project.