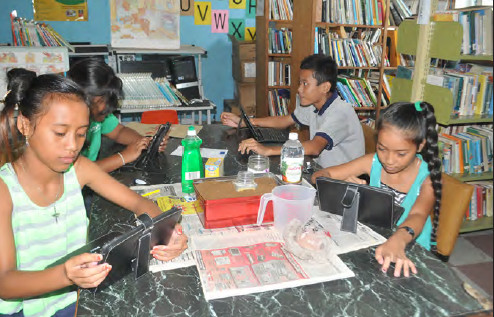 Pohnpei Catholic School is located in Kolonia town of Pohnpei State in the Federated States of Micronesia. The school was awarded a grant by the Internet Society’s (ISOC) Community Grant Programme in June 2014. The goal was to create a wireless Internet network at the school and allow teachers to incorporate the Internet into classroom activities. As of April 2017, the project has not achieved their short- and long-term goals due to various challenges, but it has brought benefits to the teachers.

Pohnpei Catholic School is located at the center of Kolonia, a coastal town and the previous capital of Pohnpei State in the Federated States of Micronesia (FSM). It is one of the most populated places on Pohnpei and the commercial hub of the island, with a population of around 6,000 based on 2010 Census data. According to a 2005 report, male-headed household income in Pohnpei is US$ 76.9 on average, while female-headed household income is US$ 23.1 on average. Moreover, the government is the largest employer in Kolonia.

Although Pohnpei is connected to a fiber optic cable line, the Internet is rarely available on island. The minimum payment for household Internet line with ADSL is US$ 33. The island suffers from low penetration rates, and most people use the Internet while at work. According to a 2015 report, the fixed broadband subscription rate per 100 inhabitants in Micronesia is 3 percent while the mobile subscription rate is 21.5 percent.

In Kolonia, there are very few public Internet access sites for the community. At Pohnpei Public Library, Internet use has recently become free thanks to government support from the legislature. The library is open during business hours (9:00 a.m. to 5 p.m. on weekdays, 10 a.m. to 2 p.m. on Saturdays) to the public. Other than that, there is free Internet at the state hospital and at the airport. The FSM Telecommunications Corporation also hosts a small number of computers in their lobby for Internet use through a prepaid phone card, which costs US$ 0.08 per megabyte. Users can also connect to the Internet from their laptops or at the company’s 14 hotspots available around the island.

At Pohnpei Catholic School, there are approximately 370 K-9 students and 15 teachers. The school has a computer lab with about 10 computers. The primary motivation behind providing Internet access to the school was to connect the teachers so that they could find additional resources for their classes given that minimal research texts and up-to-date books available at the library, and enable students to conduct online research.

With the ISOC grant, the school has built three wireless hubs across three different buildings at the school, and the school administrators purchased 20 7-inch tablets. Since the school has an Internet budget of US$ 1,260 a year for their monthly access fee, the project’s short-term goal is to increase bandwidth so that full class of students, which tends to be 20-25 students, can use the Internet at once. The long-term goal is to provide capacity building programs, such as offering computer classes to high school students, providing specific Internet skills or software training classes, and more information for parents.

Since the installation of a wireless network in March 2015, the project has not achieved its short-term or long-term goals due to various challenges. As of April 2017, the school is still working to realize their short-term goal of increasing bandwidth. And while the students have not begun to benefit from the connectivity as much as hoped, it has benefited teachers.

All 15 teachers have their own personal laptop and were trained in Internet use. They use the connection to access information and plan their lessons. Internet connectivity has also facilitated communication between teachers and parents. Teachers can easily inform parents about the student’s activities and progress through email as well as through the school’s Facebook page due to the connectivity provided by this project.

Lack of community ownership – Due to lack of resources, the implementation of the project relied on volunteers. Although there were information technology (IT) experts among the parents, getting enough parents to volunteer to dig the lines and lay the cables was a challenge, and it took time. The project was perceived as low-priority by parents compared to their other obligations with family and work. As a result, the implementation of the project took more than six months.

Social norms – Once the volunteers stepped in, there were also delays completing the tasks due to cultural perceptions of time. In polychromic cultures like Micronesia, punctuality is firmly based on the relationship rather than the task, and plans tend to change easily. This has led to the cancelation and rescheduling of planned activities.

Lack of affordable access – The school’s budget is limited to upgrade the connection speed and provide enough bandwidth for the 20 tablets to access the Internet at the same time. The system cannot afford for many students to get online at the same time; therefore, it often crashes, which leaves students frustrated. Since there is only one telecommunications company, the available packages for education are limited. The only available educational package for schools is directed to connecting the school’s administration, such as the principal, but not students. Thus, the project would benefit from the availability of affordable educational packages.

Considering local sensitivities is important – The project team’s experience suggests that project managers may benefit from taking possible social, cultural, and economic barriers into consideration while setting their goals and timeline. In addition, they suggest conducting research about the available resources upfront and prepare key data, such as the affordability and availability of services. Maintaining flexibility and creating a “plan B” for when things do not go as planned also seems prudent.

Engaging communities in the implementation process is useful – Organizations can benefit from partnerships with community members during the implementation of these initiatives to encourage volunteerism in the community and provide digital literacy skills to support those programs. The team highlighted how social and technical support for this process and knowledge sharing in the community can help sustain networks in the long term.