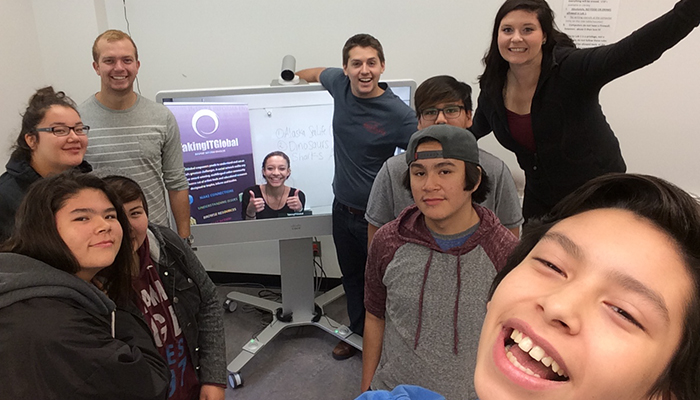 The Connected North initiative aims to augment educational and healthcare services to youth in remote indigenous communities in Northern Canada. It deploys Cisco’s Telepresence technology (MX 300 G2) to offer real-time, live interactive experiences with experts and students in other classrooms around Canada. The project has grown from a single pilot location in 2014 to implementation in 30 schools. Within five years, Connected North expects to deploy telepresence units in 100 schools. Connected North’s success is indicative of the utility of immersive, interactive Internet learning for students in remote regions to combat endemic local social issues such as a low graduation rate of approximately 20 percent, and the highest global per capita suicide rate among youth. The project’s expansion, while desperately needed, is curtailed by cost and funding concerns.

The Nunavut territory is Canada’s northernmost territory, almost exclusively made up of about 37,000 indigenous people. Nunavut is a conglomeration of 25 communities without roads between them that stretch across one-fifth of Canada’s total landmass. Telecommunication services in the region are nearly nonexistent, which further reinforces the area’s isolation. When available, Internet is costly and slow with uplink speeds of around 1 Mbps.

Internet service providers (ISPs), advocates, and the territory’s government agree that greater investments in the region’s infrastructure are required to better link it with the south. Currently, the government provides connectivity to the region as the few private offerings are unaffordable to Nunavat’s citizens. Due to the lack of telecommunications infrastructure, digital literacy and adoption are low in Nunavut as well.

Connected North is an immersive, digital education, and mental health and wellness network that provides customized services and real-time experiences to students in remote Indigenous communities. Launched as a pilot in a single school in the Canadian territory of Nunavut, the project has expanded since 2013. Using Cisco TelePresence technology, Connected North leverages real-time, high-definition, two-way video to connect students to experts in K-12 classrooms.

There are five overarching content areas that Connected North focuses on: virtual fieldtrips, mentoring, experts on demand in a vast array of subject areas, classroom cultural exchanges (between indigenous and non-indigenous student populations and among indigenous classrooms), and programming called “Future Pathways,” which aims to help students attend post-secondary institutions as well as make them aware of career paths that are available to them. 90 percent of the content is indigenous themed. Connected North staffers work hand-in-hand with teachers for content offerings, and work to reinforce indigenous cultural educational styles, such as the emphasis on collaborative learning in Inuit schools.

In smaller schools, telepresence setups are put in common areas so all classes may use them as needed. In larger schools, each intermediate classroom (6^th^, 7^th^, and 8^th^ grades) has a unit. Cisco sells these units for CA$ 30,000 (US$ 23,611.82), however, they offer a 70 percent discount to Canadian school districts, bringing the cost down to approximately CA$ 9,000 (US$ 7200). Due to the program’s success, Cisco spun-off Connected North to be managed and led by a charity partner, TakingITGlobal. Together with Cisco, the team built an ecosystem of more than 50 funding partners including federal, provincial, and territorial governments, private sector lenders, private foundations, and individual donors.

The impetus and continued support for Connected North comes from two tragic statistics of Canadian indigenous youth: the dropout rate is approximately 80 percent, and these communities have the highest rates of youth suicide per capita in the world. Combatting these systemic problems required more than just educational resources. Connected North provides students with access to remote mental health and wellness professionals that are otherwise inaccessible. The continued success and expansion of the Connected North project is shows feasibility of technological interventions to ameliorate systemic social issues in remote communities. While it may not be possible to provide experts and healthcare providers to remote populations physically, Cisco’s telepresence units help bridge coverage gaps.

Connected North began in 2013 with a single pilot school. As of 2017, there are currently 32 schools with 4 more being built. A five-year projected estimate sees more than 100 schools being serviced within the next five years. Connected North partners only with those communities who request the service, and so many school districts have displayed interest that there is currently a waiting list. In Nunavut, the territory where the pilot school was located, the government asked Connected North to rollout the service in all of its 43 schools, which they will subsidize as a budget line item. Other locations where telepresence units are in-use include the Northwest and Yukon Territories, and the province of Ontario.

Since its inception, Connected North has facilitated more than 750 real-time sessions for nearly 3,000 indigenous students. Despite starting challenges, schools averaged three-to-four sessions a week by 2017. In practice, this affords Connected North almost an hour a day in the classroom, which teachers report as a net positive on student engagement and success.

Connected North has continually relied on feedback from students and teachers in schools with the telepresence units, and the response has been uniformly positive. In the pilot deployment, 81 percent of students reported that they learned more in a telepresence session than in their traditional classroom coursework. In addition, students found telepresence sessions made science more interesting (83 percent) and more enjoyable (89 percent). Later assessments echoed this positive impact on student interest level. Evaluations of the 2015-2016 academic year, for instance, found that 60 percent of students found an aspect of the sessions interesting and wanted to learn more. Connected North’s intervention has also positively impacted individual students’ views on their future. Sixty-four percent of students reported believing they could be successful in the future, and 62 percent reported being excited about their futures.

The telepresence units also work to empower teachers, along with the students. Connected North works in synchronization with teachers to provide the materials that are most relevant to the educators’ lesson-plans. Also, the organization offers a considerable amount of professional development opportunity for faculty.

Lack of adequate funding – The aims and technologies that guide the Connected North project are easily scalable. Yet, the largest impediment to rolling out telepresence units in more school districts is costly. Cisco has contributed more than US$ 5 million, and while donors and governmental entities have been generous, yet funding still falls short of providing units to all the schools who desire them.

Considering cultural specificities is important – The Connected North initiative pays a lot of attention to indigenous cultural specificities. The way in which telepresence units function is congruent with Inuit pedagogies about collaborative learning and mixed-media lessons. In the project’s present incarnation, local curricula guide the type of content that Connected North makes available. Finally, students have been found to be particularly interested in sharing their own culture and learning about geographically diverse peers’ cultures, and telepresence units are particularly suited to facilitate this.