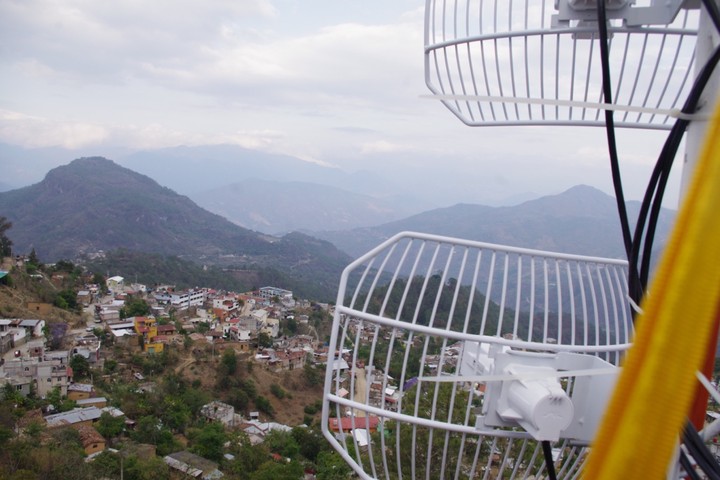 Rhizomatica is a not-for-profit organization based out of rural Oaxaca, Mexico, that deployed the country’s first independent GSM network in 2014. It has connected sixteen communities through community-owned and operated micro-telecommunications enterprises and leveraging open-source efforts to provide affordable connectivity, each ranging about 5000 people until 2017 and conducts workshops and courses for trainers to connect more communities.

Mexico had 33 million Internet users as of December 2010, which amounts to only 29% of the population of the world’s most populous Spanish-speaking country. Urban and rural teledensity differ significantly, with over 41% penetration in urban areas and below 5% penetration in the most rural areas of the country. Rural communities in Mexico that are economically disadvantaged are not an economically viable market for the incumbent providers, who also do not have a compulsory license obligation to serve underserved or unconnected communities. The state of Oaxaca represents amongst the most backward regions in the country, with over 53% of the people living in small communities of fewer than 2,500 people each.

A 2012 OECD report estimated that the welfare loss caused by poor telecommunication infrastructure was nearly 1.8% of the Mexican GDP. Prior to 2013, small communities such as Villa Talea de Castro relied on high-cost landline phone booths for their only means of connectivity, with the Internet remaining a far cry away. The lack of connectivity manifested in difficulties to access emergency healthcare and access to educational content, which contributed to the continued backwardness of some regions of the country. The lack of governmental ability to connect these communities due to significant geographical problems and the cost of infrastructure provisioning meant that communities in rural Oaxaca remained unconnected.

There are three infrastructural components to the Rhizomatica system: a Radio Access Network, a computer suite administrative system, and an internet connection. The Radio Access Network uses the 850mHz band to connect users to the network. The Internet connectivity is provided through a partnership with Protokol, which also routes external calls through VoIP. Equipment design is in conjunction with inventors and manufacturers and leverages open source technologies such as OpenBTS, which brings down the network set-up costs to US$ 2,500.

Rhizomatica leverages the strong community organizing structures in rural Mexico, with leaders required to submit a formal petition to work with Rhizomatica following a unanimous community vote. This is to ensure that the community as a whole agrees to the use and maintenance of the network, creating a sustainable model for its use in the long term. Communities must also make an initial investment of MXN 30,000 to cover installation costs as well as costs of training for community members to operate the equipment. Rhizomática receives a percentage of monthly subscription fees from the community upon deployment of the full network, which amounts to MXN 8-10 per user depending on the size of the community and the number of subscribers. Community members are trained to maintain the networks, with Rhizomatica only playing a supporting role after initial network setup. Rhizomatica provides training materials and workshops, as well as guides on its wiki for those interested in deploying OpenBTS.

The pilot programs in Sierra Juárez of Oaxaca and Santa Maria Yaviche have provided up to 500 and 700 individuals with Internet access. In five years, Rhizomática aims to reach at least 200 sites serving approximately 150,000 people and to create a conducive regulatory framework within Mexican telecommunications law to enable access to the necessary frequency spectrum in rural areas.

Rhizomatica presently serves sixteen rural communities of 2,500 or fewer inhabitants, providing the first Internet access to these communities. This connectivity facilitates mobile and internet services for banking and healthcare, communication in case of emergencies home delivery services, and community-wide messaging by local leaders.

Rhizomatica has also had an impact on the regulatory regime in Mexico as well. Rhizomatica’s pilot programs have aided its advocacy efforts with the regulatory agency to approve mulitiple rural service providers. Industry regulators as well as the Secretary of Communication and Transportation have acknowledged the importance of Rhizomatica’s project, and in July 2016, the Mexican regulator granted a frequency access concession under the new regime to Telecomunicaciones Indígenas Comunitarias A.C., a local not-for-profit set up by Rhizomatica in the five states of Oaxaca, Guerrero, Puebla, Tlaxcala, and Veracruz. This new authority enables it to serve nearly 5,000 communities in these regions.

Geographical barriers to connecting remote areas: As of 2010, some rural communities did not have access even to a cellular signal, where service provisioning was not economically viable. The problem is particularly acute in small rural communities that housed fewer than 5,000 residents.

Lack of affordability of service: Internet access was unavailable most of these regions, forcing people to travel long distances to get access to reliable connectivity, incurring high transaction costs.

Regulatory Barriers: Mexico occupies the bottom of the OECD ranks for Internet adoption and network investment. Telecom licenses were governed by a concessions regime under which only one provider in each of the country’s nine regions was nominated to provide rural Internet access. This acted as a barrier to small service providers to set up and provide connections to rural markets, until legislation for sectoral reform was passed in 2014.

Self-sustaining community-owned and operated cellular networks are a viable alternative to traditional buildouts – They have the potential to make innovative use of open source technologies to provide the first low-cost connectivity in areas that are economically unviable for incumbent operators.

Consistent advocacy for regulatory reform – Regulatory advocacy should be combined with technological innovation in deployment in order for the benefits to reach more communities.