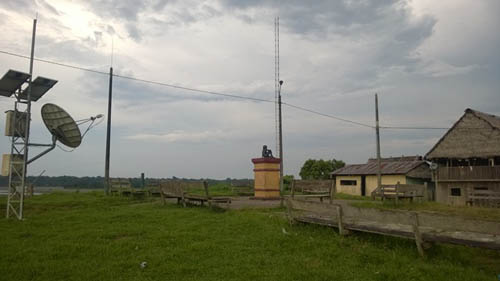 The Hispano-American Health Link Foundation (EHAS) is a largely European-funded research organization that has worked since 2004 to provide voice and data access through infrastructure deployments in isolated areas of Latin America. The organization’s focus is on providing sustainable low-cost Internet and networking technology solutions to improve quality of life and life expectancy in rural communities. With a focus on healthcare, EHAS aims to connect underserved populations in developing countries to medical resources in urban treatment centers and hospitals via telemedicine through their TUCAN3G project.

Peru is highly centralized country - around nine million Peruvians out of a total population of 31.1 million live in the capital city of Lima. The government is constructing a 13,000-kilometer-long backbone fiber network across the country to connect all 180 provinces over 22 states. Telecom operators face high costs due to rough and undeveloped terrain occupied predominately by low-income households, with large geographic regions having very low user and device density.

Peru’s mobile broadband penetration rate is also low; about a quarter of the population has no mobile phone at all, while urban elites often use multiple phones and SIM cards. As of 2010, a second-generation (2G) mobile network covers 95 percent of Peru while a third-generation (3G) mobile network covers 65 percent. Uncovered areas mostly belong to the Peruvian Amazon. Compared to 30 percent of urban households who have Internet access, only 1 percent of rural households have access. Majority of the connections are in the city of Lima and other coastal cities/towns. Satellite covers some of Peru’s mountainous regions.

The government has taken some initiatives to help connect more people to the Internet. The Amazon Integration Project auctioned the license to provide broadband coverage to 70 rural communities in the northern Amazonian region of Peru. An initiative called NapoNet, a collaborative effort between partners in the University of Colorado and the Peruvian state of Loreto brings services for health, education, and commerce to indigenous communities along the middle and upper Napo Rivers of the Maynas Province of the Loreto Region of Peru in the Peruvian Amazon.

In recent years, TUCAN3G, one of EHAS’s initiatives in the Napo River basin in the Peruvian Amazon, has begun partnering with telecom companies to enhance the sustainability of its networks. TUCAN3G seeks to deploy 3G access points connected to the existing WiLD network in order to provide affordable communications services for widespread community use. The construction of the Napo network is shifting EHAS’s emphasis from providing access to regional government outposts to connecting entire communities.

The project facilitates relationships between large mobile service providers and smaller regional ones, in order to sustain Internet access within these communities. The project seeks to incentivize the continued participation of telecom corporations that have ignored these sparsely populated, low-income areas. TUCAN3G aims to make the rural network a worthwhile interest for urban-centric corporate profitability by expanding the rural user base.

TUCAN3G started expanding to all the communities of the Napo river in 2016 with support from the Development Bank of Latin America. This new phase is known as the Napo project.

The TUCAN3G project seeks to improve the healthcare of rural Latin Americans through greater access to telecommunication technologies. The project has not been deployed long enough in the Napo River region to have yet yielded definitive data. Although data is still forthcoming for the Napo network, a similar project in Guatemala may provide insight, where telemedicine had a positive impact on community health and maternal mortality.

Napo network’s deployment has yielded some positive results in helping maintain cultural roots, and preserved long-distance familial relationships. For the first time, users can communicate with family members who have left the village to live and work in cities in Peru or other countries. Villagers are able to connect with loved ones despite geographic and economic limitations. Anecdotally, mobile coverage has also helped improve villagers’ economic resources, with some users connecting with vendors in larger towns or cities to sell their crops and other goods.

High deployment costs ­– Major providers have little interest in investing in or maintaining the network, as their profit is insignificant while deployment costs are exorbitantly high. TUCAN3G is attempting to overcome this challenge by partnering with smaller regional backhaul providers to connect these communities to the larger core network.

Low capacity for maintenance – Access to regular maintenance is somewhat limited as these communities are very isolated. Researchers more often than not rely on local inhabitants to survey and maintain basic infrastructural elements.

Challenging terrain – The geography in this region dramatically affects infrastructure costs. A tower in low-lying areas like a jungle river basin can cost up to US$ 17,000 more to build to a sufficient height than a tower in a mountainous area.

Community involvement is key – The project team believes that, given the tools for communication and outreach, a previously unconnected and isolated community can make quick and effective use of provided resources.

Telecommunications attracts other resources – According to EHAS, final-year medical students on regional assignments prefer isolated jungle communities with mobile coverage to Andean regions with developed roads but no mobile or Internet access. Thus, mobile network coverage can attract other resources.