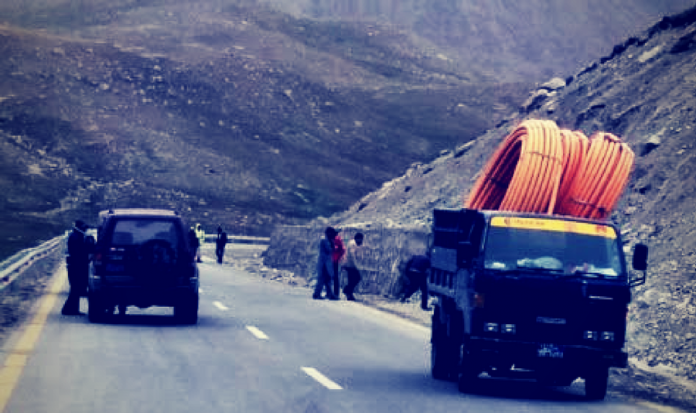 The Universal Service Fund of Pakistan (USF) is a not-for-profit entity that operates under the aegis of the Government of Pakistan. Its goal is to bring fiber-optic connectivity to Pakistan’s sparsely populated rural regions that are unserved by Internet service providers (ISPs). The USF incentivizes private businesses to provide connectivity to sites where it would have been otherwise unprofitable by disbursing subsidies. In addition to facilitating infrastructural development in these rural districts, the USF implements and oversees a number of special projects that aim to enhance these new users’ Internet use. While rural connectivity has been rolled out with some success, some of these programs have yet to find their footing.

Located in southern Asia, Pakistan is the world’s sixth-most populated country. Approximately a third of Pakistan’s 200 million citizens live in urban centers. The rest populate sub-districts across a variety of terrains, including mountains and deserts. Since so many Pakistani citizens live in rural regions, most are engaged in agriculture; however, these people are generally economically disadvantaged. Of the 39 percent of the Pakistani population that is living at or below the poverty line, 55 percent hail from non-urban areas.

Recently, Internet costs in Pakistan have fallen considerably. Yet, due to the difficult economic situation in the county, undergirded by cultural norms and low literacy rates, much of the Pakistani population is not connected to the Internet. According to the International Telecommunication Union (ITU), Pakistan has one of the lowest Internet access rates in the world, at 18 percent; however, the 2014 launch of 3G and 4G mobile telecommunications services in the country as well as initiatives aimed at digital literacy are slowly increasing accessibility. In 2017, Pakistan launched its first free public Wi-Fi network in the Punjab province. The network is meant to service more than 160,000 users by providing them with access for four hours each day.

The Universal Service Fund in Pakistan is mandated to provide high-speed connectivity to areas that are without access to the Internet. It is overseen by a board constituted by the government ministers of information technology (IT) and telecommunications, and as well as nominees from the private sector in Internet servicing, mobile and fixed-line providers, and consumer regulation.

USF ensures connectivity to the country’s sparsely populated areas by providing government subsidies to private telecommunication companies. They auction off bundles of sub-districts (between 10 and 20 sub-districts an auction, out of 130 total unserved sub-districts), and sell each project to the lowest private sector bidder. Each project for sale stipulates that in exchange for subsidized operational costs, the company must provide fiber-optic cable and installation as well as 10 years guaranteed Internet service. In addition, two fibers in each cable must remain open for a competing service provider to purchase.

When the program began in 2006, voice access was the most widely used form of connectivity. Gradually, interest in and knowledge of Internet services beyond phone access has grown as digital literacy becomes more prevalent. As of June 2017, around 7,000 kilometers of cable are servicing 100 rural sub-districts.

The USF is currently working to improve its training programs in digital literacy, meet the specific needs of the populations it serves, and enhance Internet access with more granular attention to particular village clusters within these newly (and still partially) serviced sub-districts.

Even when the network was being predominantly used for voice access, connectivity was immediately a boon to communities. Staying in touch with friends and relatives abroad was especially important to these remote communities, from which people often traveled to work in cities or abroad. Voice access also had a significant impact on farmers in these areas. They are able to make use of advice lines for problems with their crops or animals as well as check with reliable sources about the market price for their goods. Before, they were entirely dependent on middlemen to price their commodities.

A number of residents of these areas have been using the Internet to access training videos in order to improve or learn certain skills that increase their employability. USF has implemented a plan in which they set up strategically placed telecom centers that provide information and training for new Internet users, as well as computer stations for public use. These centers were not widely used once 3G and 4G access was introduced, and people began relying on their personal devices instead. Certain special projects’ centers were, however, more successful.

USF has a number of specifically focused special projects. Information and communications technologies (ICTs) for Girls is a program that seeks to empower women from marginalized communities through training in digital literacy and Internet and communication technologies. So far, they have set up 50 centers that serve 4,000 women. There are also sites set up in Punjab, Khyber Pakhtunkhwa, and Sindh that aim to help users with disabilities. These services target Pakistanis with visual impairments, and provide adaptive training and accessibility tools for Internet access and job skills and searches. USF is also currently in the planning stages for a telemedicine project that would connect major hospitals with remote villages.

Geographical and infrastructural barriers – Laying fiber-optic cable is difficult in many of the areas USF seeks to serve. The terrain is often very difficult to navigate, and desert region temperatures can rise above 50 degrees Celsius during the summer. Transportation infrastructure is not well developed in some places as well, making access difficult due to lack of roads. Mountains too can pose problems for access and connectivity. In addition, some areas to which USF would like to provide connectivity remain inaccessible due to concerns regarding safety, security, and violence, with active conflict especially prevalent in certain border zones. Due to the region’s sparse population and remote location, it is difficult to attract and maintain interest from businesses even with the subsidies.

Regulatory challenges – USF notes the urgent need for revised rules for conducting its subsidy auctions. The major issue is the difference between Internet infrastructure and more traditional infrastructures, such as transportation. In the case of the Internet, the government facilitates the building, maintenance, and (some) usage of the infrastructure, but has no ownership stake in it whatsoever. This complicates the rules of procurement usually set in stone for these auctions, as nothing is materially being procured.

Political pressure – Since USF is government-funded, those functionaries in charge of its financing and development often face pressure from politicians who want, for personal reasons, to divert funds to less needy projects or constituencies.

Low rates of digital literacy – Although the rates of adoption among populations with low levels of general literacy have been promising, USF has not been able to satisfactorily address gaps in digital literacy for residents in these newly connected rural areas. Many people are able to quickly learn how to use connectivity for entertainment and social networking, and a few have been taking advantages of online skills training, yet most lack knowledge of the potentials for farther-reaching benefits of connectivity. The telecom centers built by USF to advance this purpose have not functioned as especially successful vehicles for digital literacy training.

Equal focus on demand and supply-side barriers is needed – Like many programs of its kind, USF first focused the majority of its attentions on supply. Now that the network has been largely established, they can focus their attention on the demand side, homing in on the benefits of digitizing government applications and license procedures. This double-focus is useful for a healthy implementation plan, which generally focuses on ways that connectivity will serve the particular needs of a certain area/population and have the greatest impact on their well-being and potential.

Affordability is necessary for ubiquitous usage – Pakistan has one of the most affordable rates of Internet access in the world. Their model depends largely on the exceptionally low cost of Internet access, mobile phones, and wireless-capable devices, as well as their stipulation that telecom companies be forbidden from raising rates in these areas. Their business model, then, may not be as effective in places where rural inhabitants could not afford standard rates of connectivity.