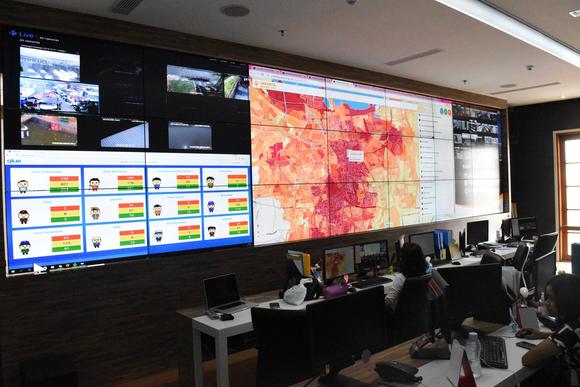 Jakarta Smart City (JSC) is a government initiative to develop a multi-use, crowdsourced big data platform to close the digital divide and facilitate data transparency and citizen communication with government officials in Jakarta. The initiative includes a website, smartcity.jakarta.go.id, as well as smartphone applications Qlue for residents and CROP Jakarta for civil servants and officials. Smartcity.jakarta.go.id uses the Google Maps engine and data from the traffic application Waze. Qlue is a smartphone application through which users can report incidents such as flood, crime, fire, or waste. City officials respond to situations through the CROP Jakarta smartphone application.

Indonesia signed the Open Government Partnership (OGP) Declaration as a co-founder of the organization in 2011 and played a leading role in the United Nations Sustainable Development Goals (SDGs), which reemphasized the need for effective, accountable, and inclusive governance.

The country’s National Long-Term Development Plan (2005-2025) set a goal toward a “just and democratic, and peaceful and united” country, with a “clean, effective, democratic, and reliable” government in the National Medium-Term Development Plan of 2015-2019. In 2013, the Indonesian government introduced the “One Data” initiative as a way to improve data governance. A national data portal was established with 1,200 datasets from various government agencies that the public can easily access. Indonesia established the National Open Government Secretariat in 2015, along with 694 Documentation and Information Management Offices to handle request for information across the country, and a national online complaint management tool that has attracted 300,000 users as of September 2015 (OECD).

Several issues related to open data and open government hinder Indonesia’s progress. The underdeveloped open data ecosystem – which includes regulations on how data should be produced and managed, and the limited open data advocacy that still focuses on “opening up data” only without expanding to utilizing data to solve problems – are two of the major concerns.

Jakarta Smart City, started in 2015, provides new space for the community to participate in the Jakarta’s development through applications and websites accessible via mobile phones. Through the Qlue application, people can report problems for response by relevant government agencies. Communities can also monitor the performance of government officials through the website performance.jakarta.go.id or report directly to the government via Short Message Service (SMS). In addition to applications that provide reporting services to the public, JSC also provides a platform for government officials to manage all forms of community participation called Citizen Relationship Management (CRM).

The Jakarta Smart City portal displays data that can be accessed by the community. This portal is one of the government's efforts to realize verified transparency by centralizing and integrating all data. It also provides data for developers through api.jakarta.go.id, and works in cooperation with start-ups such as Go-Good, Zomato, Trafi, and Google Transit.

IBM Global Business Services helped the JSC team design a solution to provide a big data hub for integrating information from the citizen feedback application and social networks, as well as government services such as transportation, healthcare, water distribution, and other services. The solution uses IBM InfoSphere DataStage to extract, transform, and load data from all these sources into a central data platform, built on IBM BigInsights, and a powerful data warehouse, which runs on IBM PureData System for Analytics. IBM InfoSphere Information Governance Catalog provides a robust data governance framework, making it easier to align the technical systems with the business requirements and processes. As analysis tools, the solution provides IBM Cognos Analytics for reporting and dashboarding, IBM SPSS Modeler for advanced analytics and predictive modeling, and IBM Text Analytics for categorization and sentiment analysis of unstructured text.

The project requires cooperation across the Department of Communications, Informatics, and Public Relations, the Unit Manager (local neighborhood government), and the Smart Governance system. JSC is a linking system that facilitates community participation and government responsiveness. The concept of a smart city in Jakarta is based on six pillars: smart governance, smart people, smart living, smart mobility, smart economy, and smart environment.

Jakarta is a district of 10 million people divided into five cities, 44 sub-districts, and 267 villages. The city government receives an average of 1,400 messages per day via its custom-built Qlue mobile application, which allows users to submit feedback about public services. Citizens send an average of 130 SMS messages per day to the governor’s mobile phone, and many more via other channels such as email and Twitter. JSC also provides a big data platform that analyzes an average of 40,000 items of feedback per month.

Users of JSC’s services typically tend to be well educated, actively engaged with social media, and are between the ages of 20 and 40. JSC has tried to reach a larger audience in a variety of ways. The application developers regularly provide training and engage in media outreach. Online, the JSC Implementing Unit publicizes through social media channels using articles, photos, infographics, audio and video. Offline, the team raises awareness through public figures and participation in events and exhibitions. The public reporting system incentivizes participation by gamifying the application, in which users create avatars and score “points” for making reports, but still not many people participate.

Self-monitoring and evaluation systems are in place within the project. A major component of JSC is data analytics, which is used by the government to make policy recommendations and by third-party application developers. Monitoring and identifying the sustainability aspects of the complaint information layer in the Jakarta Smart City portal through the Monitoring Room is one form of community complaints management. JSC also collects and analyzes the aspirations and complaints from the other six channels by utilizing the social media functions of the Jakarta Provincial Government. The management of community complaints was conducted with effective coordination between the Jakarta Smart City team and various government departments. The Jakarta Smart City Management Unit conducts studies to monitor the performance of the bureaucracy.

Despite the technological and bureaucratic infrastructure in place, the use of the application has fallen off sharply in the last year (there is much less public reporting currently compared to a year before), and it is not clear why. Some reasons for non-adoption may include lack of awareness and lack of trust toward the government.

Lack of interdepartmental communication – Data management is difficult because of the relative lack of communication between of the different government departments, with a low degree of cooperation and compatibility across them.

Political change – There is uncertainty over continuity of the system owing to a change in local government in Jakarta. It is also challenging to balance the provision of basic infrastructure and high capacity infrastructure simultaneously, as political priorities often dictate fund allocation.

Creating communication strategies to improve awareness – In JSC’s experience, it is difficult to attract new users who are not ICT literate by advertising exclusively online. The challenges faced by JSC indicate a positive outreach strategy includes diverse channels and ways to publicize the initiative and educate users.