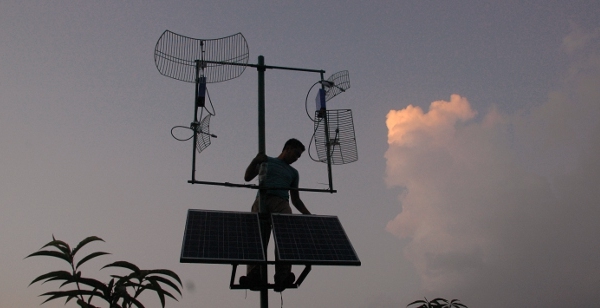 AirJaldi is an Internet service provider (ISP) that designs, builds, and operates Internet networks in rural areas. Serving more than 230,000 subscribers across five states in India, they operate public hotspots with paid access as well as provide fixed wireless Internet to homes, businesses, medical centers, and schools. AirJaldi focuses on both social outcomes and profitability, and finds inventive and lucrative solutions to connect unserved, low-income areas at sustainable, inexpensive rates. The Harisal project in India served as an experiment for a TV white space (TVWS) deployment. Since the deployment in 2015, 80 surrounding villages have been connected in Amravati district in Harisal, Maharashtra, India using unlicensed spectrum and TV white spaces.

India is known as a global provider of information and communications technology (ICT) services, but the digital divide in this country is quite stark. In 2016, eight out of 10 Indians owned a mobile phone, but there were still nearly 1 billion Indians not connected to the Internet, according to World Bank. In terms of Internet speed, India ranks 52^nd^, despite having the third-largest population of Internet users in the world. A report released at the India Mobile Congress 2017 found the Internet penetration in rural India was only 16 percent compared to the national rate of 33 percent.

As people go online, they are “hardly making use of the web,” as a Quartz article claimed. A RedSeer’s report showed that half of the 500 million Indian Internet users had social media accounts, but 60 percent of them did not use Google, Wikipedia, email, or other related services. Only 10 percent of these users used online services, such as retail, travel booking, and food delivery. The unevenly distributed digital literacy skills, largely due to India’s social inequality issues concerning income, education level, and rural/urban areas, play a role in this situation.

In June 2016, the Department of Telecom (DoT) decided not to allocate the 470-582 megahertz (MHz) spectrum band for commercial deployment of TVWS technology. Since the DoT did not delicense the spectrum band and will decide on its pricing in the future, however, there might be an opportunity for companies to purchase it and utilize TV white spaces technology.

With only 26 percent of India’s population connected to the Internet, the country has become a major target for technological development. Microsoft has partnered with the Government of India and local service providers to increase access across the country. AirJaldi is one of these providers, having launched their partnered network-building project in the Amravati District of Maharashtra state in 2015. Harisal, a tribal village bordering a tiger preserve, was chosen to be India’s “first digital village.”

The project has three main objectives. First, the village was selected for its potential for social development: with the highest child mortality rate in the state, low literacy and income levels, and intermittent access to basic utilities such as electricity, Harisal had a lot to gain from connectivity (the initiative also set out to explore how a village is affected when digital services become available). Second, the Harisal project served as an experiment for the implementation of TVWS. In India, spectrum for TVWS deployments is only available for educational and research purposes, and this project took advantage of the opportunity to test deployment and maintenance. The third objective was to build a rural network with this technology and others, with Harisal serving as the anchor for a surrounding network of dozens of villages.

The project in Harisal and the secondary network around it has surpassed initial goals. Although the goal was to connect 50 neighboring villages after Harisal, the project has now connected 80. The Harisal project also won recognition for its innovative implementation of digital service in rural areas. In addition to public hotspots, three schools, four banks, and a hospital have been connected.

Record-keeping has been improved by connectivity. Before connectivity, school officials needed to physically deliver their attendance records to the state government office in the city. With Internet access, the village is able to report through e-government services. Before connectivity, students were reliant on print textbooks, many of them outdated. Now students have access to self-guided Internet research, and schools have integrated online tutorials and lessons into their classrooms.

There are only three medical doctors in the village and no specialists. With Internet connectivity, rural general practitioners can consult with a range of medical professionals in Mumbai, the largest city in the state.

The large swaths of tiger preserves bordering the village have benefited from connectivity. Cameras with a live streaming feed have been set up near watering holes, which greatly facilitates data collection about the population size of these endangered animals.

Electricity – The instability of the power grid means that the area has uneven access to electricity. With the possibility of only a few hours of power available a day, AirJaldi has had to incorporate alternate power sources into their Internet network, such as solar.

Over-reporting of connectivity – In general, governments tend to over-report connectivity in order to downplay the severity of digital divides. Far less than half of India has access to the Internet, but not all of these areas are completely un-served; under-served areas of India often have non-functional network infrastructure. AirJaldi came to develop certain rural villages that were reported to have workable fiber networks, but found unstable, non-working lines.

Cost – Keeping costs sustainable is the greatest challenge for this ISP, as they prioritize affordable access in low-income, rural areas.

Recruiting locals is key for success – Five out of six people running the Harisal network were recruited from the local community. AirJaldi credits a large measure of its success to this community investment.

Flexibility is necessary in unconnected regions – There is no stable model for building networks in rural areas; every circumstance is different and will likely require different strategies, budgets, timelines, and technologies. Foreknowledge of this variability and need for flexibility are key characteristics of a successful rural ISP.

Persistence and purpose should precede profit-making – AirJaldi asserts that any ISP working on rural connectivity needs to have a larger purpose than the economic stability of its business. Rural ISPs must be prepared for dips in profit and periods of debt; however, with persistence and clear social purpose, profitability is possible.