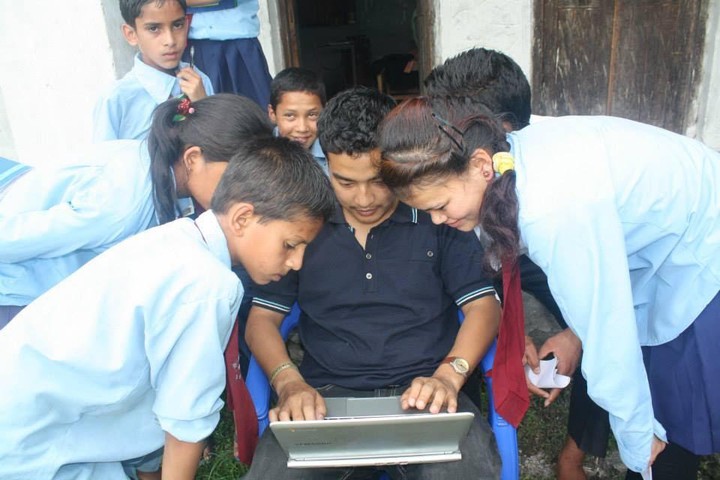 Online Vidyalaya is part of a 2014 initiative called “Internet – Past and Future – The Tool for Education Revolution,” which sought to bring digital literacy and e-learning tools to underserved students in the mountainous region of Nepal. Training was provided to 43 teachers and 360 students from grades 8, 9, and 10 in ten schools in rural Nepal. The project also provided a web application, onlinevidyalaya.org (meaning “online school” in Nepalese), which offered students e-books and curated lessons from YouTube that would be advantageous to the students. Online Vidyalaya is an example of using technology to increase digital literacy and access to materials for students in remote, under-resourced regions.

Nepal witnessed 17-fold growth in the number of Internet users: from only 1.1 percent of the total population in 2006, to 17.2 percent in 2016 – approximately 4.9 million users as of 2017, according to Internet Live Stats. Internet users and quality networks are concentrated in the major cities of Nepal, however, leaving the rural areas with scarce to nonexistent Internet connectivity.

The Nepal Wireless Networking Project (NWNP) has been a significant effort to connect the rural areas of Nepal. The project has received support from various institutions such as the World Bank, the International Telecommunication Union (ITU), George Mason University, as well as groups of volunteers from the United States, Singapore, Australia, and more. As of 2013, the project has served more than 140 mountainous villages.

Information and communications technology (ICT) adoption into education has been recognized by policy-makers, but most initiatives to support technology use in schools are being taken by private donors and nonprofit organizations. In 2012, 89 students in rural areas received the certificates for having completed the two-week training on digital literacy conducted by the Logged On Foundation and Microsoft Innovation Centre Nepal. NWNP also partnered with the Nepal Research and Education Network to develop interactive educational materials for students in remote areas, while Code for Nepal organized a two-week Digital Empowerment Training for 20 women to acquire and improve digital skills.

Grade 10 students in Nepal have to take the final examination called the School Leaving Certificate (SLC) at the end of the year. Despite a low percentage requirement to pass the exam, a majority of students, especially those going to public schools in rural areas, still fail every year.

The “Internet – Past and Future – The Tool for Education Revolution” was a 2014 initiative that had two primary objectives. The first was to introduce students to ICTs. Ten schools were selected, and trainings were given over two or three days at each location. The trainers were six information technology (IT) students who had recently graduated. They first explained the basic use of the Internet. Other lessons included how to use social media for educational ends, making the students aware of cybercrime, and lessons on e-governance initiatives. Lessons were taught via as many methods as possible, including lectures, PowerPoint presentations, brainstorming sessions, games, and group work, to students in grades 8, 9 and 10.

The second aspect of the project was the web application onlinevidyalaya.org. Developed using WordPress and a content management system based on PHG and MySQL, Online Vidyalaya was a single platform for the students to access e-learning video and text content. The six instructors spent four months pouring over the science and math textbooks used in the relevant schools. After outlining the subject matter by chapter, they sought out credible sources, primarily from YouTube, and added them to the Online Vidyalaya portal. This included approximately 800 videos as well as PDFs of e-books provided by the Nepalese government.

Primary funding came from an Internet Society (ISOC) grant. Other partner organizations include Yagiten Pvt. Ltd. for the maintenance of computer labs, New IT Venture Corporation for e-materials, and the World Bank.

A total of 360 students and 43 teachers benefited from this project. Many had no familiarity with the Internet prior to the training provided as part of this project. Similarly, most had never utilized e-learning tools. Since all of the information had been centralized on Online Vidyalaya, the project circumvented unreliable Internet by uploading the whole platform onto computers in the school computer lab, and both students and teachers continue to make use of the portal even though the project has ended.

Most students did not have an email address prior to the training. Trainers helped them create them, which they then used to become a member of ISOC.

Teachers were unaware of technologies such as the Google Drive suite and blogs, and the training has greatly increased their awareness of the utility of ICTs in their classrooms.

Time constraints – One of the largest problems faced by the initiative was a lack of time. Trainings were originally intended to be 20 hours over 10 days. Yet, because the schools’ regular course schedule could not be disturbed, schools only allowed for a maximum training time of three-to-six hours a day over three days. After or before school was also not an option either, as students sometimes travel far distances to attend school. Trainers also had to travel far distances to reach the schools, which limited the amount of resources they could bring.

Lack of infrastructure – There are a limited number of computers in the schools – 20 computers for more than 200 students, and at times, five computers for 300 students. The lack of hardware considerably limited the number of students that could both receive training and access the e-learning materials. Also, Internet connectivity is not always guaranteed, and the lack of bandwidth was also an issue.

Lack of skills – At the outset of the project, the students are assumed to have at least baseline familiarity with ICTs; however, this was not the case. In addition, the training and e-materials are in English, and many students do not have enough fluency to make full use of the offerings. Localized Nepalese language materials would be a boon.

Training duration should be optimized to local contextual realities of the target population – The lack of hardware and consequent low familiarity caused led to copious hurdles. More hardware means more students can benefit from programs such as these. In addition, the trainers felt that students would benefit from a longer training. They estimate at least a week is necessary for the most impactful results.