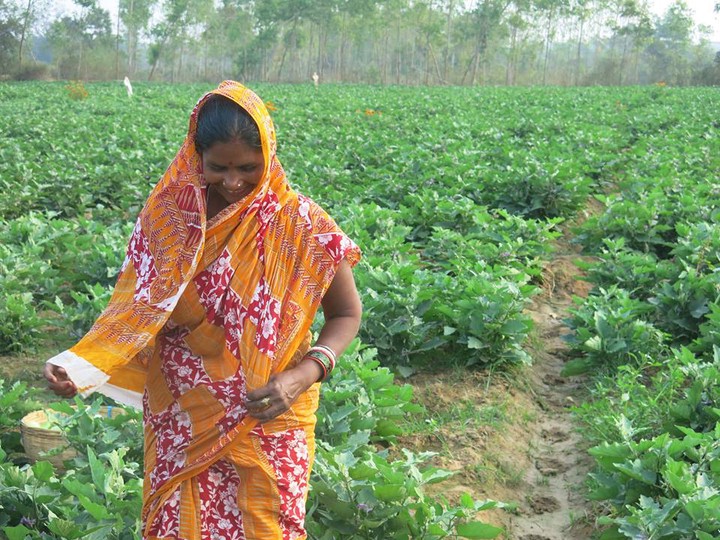 eKutir is a for-profit social enterprise group (certified B-corp) that provides economically sustainable solutions for smallholder farmers. Founded in India in 2009, eKutir’s mission is to eliminate rural poverty of smallholder farmers by harnessing digital technology and local entrepreneurship to grow farmers’ economic, social, and human capital. The innovation of eKutir is in designing a decentralized, risk-mitigating, and transparent infrastructure for entrepreneurs and farmer, as well as using information and communications technologies (ICTs) as tools for scaling and replication.

Agriculture plays a vital role in India’s economy, with impressive growth in terms of its contribution to the world’s food trade annually. The Central Statistics Office (CSO) estimated the share of India’s agriculture and allied sectors as 17.3 percent of the Gross Value Added (GVA) during the 2016-2017 period. According to the India Brand Equity Foundation, agriculture is the principal means of livelihood for more than 58 percent of rural households across the subcontinent. The country is also witnessing “a rapid feminization of agriculture,” as the World Economic Forum (WEF) noted, since more young men are migrating to urban areas to seek employment, leaving women to become the main labors.

India has pushed the development of technology to enable the growth of knowledge-intensive agriculture. Indian farmers, however, have not fully taken advantage of ICTs to boost their growth. According to RML (formerly Reuters Market Light), 94 percent of Indian farmers depend on “fellow farmers” as the preferred source of information, followed by 10 percent relying on agricultural retailers, 4 percent on TV and radio, and only 3 percent on agricultural extension officers.

The Ministry of Agriculture and Farmers Welfare established the Farmers’ Portal in 2015 with the ambition of providing farmers with specific and relevant information in various languages and media (text messages, email, audio, video, etc.). Launched in April 2016, the e-National Agriculture Market (eNAM) also creates an online platform that integrates agricultural markets online, thus allowing farmers to bid for the best prices across markets.

The private sector has also taken initiatives to promote technology for farmers. RML’s agricultural information service has reached 1.4 million registered farmers in more than 50,000 villages across 17 states since 2007. In 2014, RML partnered with the Small Farmers Agri Business Consortium to launch the agricultural e-commerce services Krishidoot that connects more than 10,000 Farmer Interest Groups associated with about 300 Farmer Producer Organizations (FPOs) and 8,000 market players.

Through a decentralized network of micro-entrepreneurs, eKutir converts an exploitative and fragmented agricultural system into a collaborative and connected soil-to-sale model. Trained entrepreneurs, equipped with their suite of low-cost mobile applications, extend agricultural services to the last mile, and provide four key services:

Concurrently, these entrepreneurs connect suppliers, aggregators, and distributors to this network of smallholder farmers, providing simplified streams of communication, data, and products between the many stakeholders in the agricultural value chain. This highly personalized, holistic approach generates rural employment, sustainable income, and increased productivity while still reducing the costs, communication challenges, and time associated with each step of the process.

eKutir has set out to develop a unified and integrated platform to empower smallholder farmers that can be scalable to all emerging markets globally. That plan has three pillars:

They offer a number of specific services through the platform as well. For instance, FarmChalo provides smallholder farmers with access to reliable soil test analyses, quality agricultural inputs, and crop planning tools, while collecting extensive data on farmers’ operations. FARM aggregates farmers’ data from FarmChalo, syndicates it with publicly available market data, and generates a credit and risk score based on a farmer's land, production, sales, capital, and other metrics. eKutir has developed a “farm score” akin to a credit score to facilitate the funding and financing of farms. They are working across India and Nepal, and working toward expanding the project in Sub-Saharan Africa and Latin America as well.

eKutir leverages an ICT platform to progressively build a self-sustaining ecosystem to address multiple facets of smallholder farmer poverty. It has evolved through five distinct phases, each expanding the number and type of actors engaged and the breadth of ICT-supported services provided. The evolution displays a distinct pattern where the five elements of the ecosystem progressively evolve and reinforce one another to create a system that is economically sustainable, scalable, and can accelerate transformative change.

In 2009, eKutir began engaging with farmers in Nayagarh, Odisha, to understand their challenges. It was clear that improving agriculture was their most immediate priority, and that farmers were exposed to many risks. eKutir decided to start with agriculture interventions, and gradually evolve with a suite of services catering to sanitation, energy, health, and education.

They partnered with Grameen Intel Social Business (GISB), which was founded with the goal of solving social problems with information technology at affordable prices. The partnership brought together GISB’s expertise in technology and eKutir’s knowledge of the agricultural sector.

Having gained the trust of the farming community, in December 2009, eKutir expanded the nutrient analysis service to a larger area. Their goal was to expand using a model that engaged and empowered the local communities in order to make it sustainable in the long-term. They had to move beyond traditional modes of customer engagement to a lighter, community-driven model. This required a local human resource as well as a mobile technology platform. This was the genesis of the micro-entrepreneurship model, where a local entrepreneur equipped with portable technology would provide the service to the farmers.

eKutir generates revenue through the annual maintenance fee charged to the micro-entrepreneur (ME), a share of the farmer membership fee, and a commission on each transaction facilitated by the ME. At this initial stage, however, the ability of MEs to mobilize the community and break-even was a testimonial to the sustainability of eKutir’s business model – even more so than revenue. The introduction of the micro-entrepreneurship model also allowed eKutir to expand its geographic reach and farmer base. It created a decentralized structure with multiple entrepreneur-farmer clusters, which resulted in increased interaction between the farmers in each cluster as well as a desire to know and learn from each other’s farming activities.

User acquisition – The high costs of reaching and training farmers present a significant challenge. Many resources are required to raise awareness. The micro-entrepreneurial model has effectively insulated eKutir from some of this burden, but the success of the whole enterprise requires raised awareness and adoption on a large scale.

Low levels of traditional literacy – Related to user acquisition, there is the larger challenge of ICT adoption. This, however, requires some level of basic ICT literacy, along with introducing behavioral changes associated with new technologies to a base of potential users.

Social norms – There are gender imbalances among farmers and among users of ICTs.

Lack of locally relevant and local language content – Catering to users with low and variable levels of literacy presents challenges to the design of the platform and interface.

ICT ecosystem approach is beneficial to enable actors to derive value– The eKutir ecosystem’s development pattern underscores how the five elements of the ecosystem evolve and reinforce one another. The technology moves from a single application to a platform that supports a suite of diversified applications. The intermediaries move from being self-sustaining to successful entrepreneurs. Communities move toward better integration with the actors in the farming sector and beyond. New institutions that are created then find acceptance and get formalized. The number and diversity of partners increase over time, and each actor derives value from the system.

**Scaling up involves effectively embedding and institutionalizing business models into the local contexts of a large number of communities –**The two key questions to ask at this stage are: What institutions and community practices will create additional value within the local contexts? And how can policy levers and private sector investment draw a larger set of members and new partners into the ICT platform-enabled ecosystem as well as reinforce its sustainability?

The eKutir system was designed for economic self-sustainability since its inception –A single application of technology (a soil testing tool) that addressed a critical need of the farming community was combined with the micro-entrepreneurship model. Since the technology was developed in consultation with the target audience and addressed a pressing need, a significant number of farmers took advantage of the service. The demand also allowed the intermediaries to charge a fee for the service, ensuring that the two important actors in the emerging system (intermediaries and communities) derived value from the very beginning, making it self-sustaining. This requires concerted effort from multiple actors (e.g., farmers, micro-entrepreneurs, agricultural firms, sanitation firms, communities, and government), each leveraging their core competencies, but doing so in collaboration with others for self-sustaining, maximum impact.