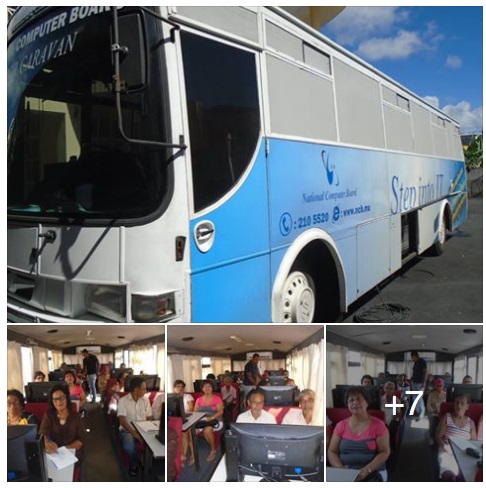 The National Computer Board of Mauritius was established in 1988 by the National Computer Board Act to promote the development of information and communication technologies (ICT) in Mauritius. It is a para-state body administered by a board of directors and operates under the aegis of the Ministry of Technology, Communication, and Innovation. Its goal is to be a key enabler in transforming Mauritius into a Cyber island and regional ICT hub. The project is working to reduce the digital divide and promote connected communities by implementing 600 Wi-Fi hotspots with 10 megabit per second (Mbps) Internet connection through fiber-optics, set up in public places across Mauritius, as well as with the introduction of 270 computer clubs across the country. The projects are oriented toward providing universal access to ICTs to all segments of the population.

The government of Mauritius aspires to make the island a “cyber island” by focusing on the development of its telecommunications sector. In 2016, the ICT sector contributed 5.7 percent of Mauritius’s gross domestic product (GDP), where it is expected to become the third pillar of the island’s economy. Moreover, according to the International Telecommunication Union (ITU), Mauritius ranked 73^rd^ out of 175 countries in the 2016 ICT Development Index, the highest among all African nations.

The development of the ICT sector lies within the strategy to position Mauritius as a platform for ICT-related business services delivery to Africa, according to the Minister of Technology, Communication, and Innovation. Many global companies have recognized the country as a promising market and invested, such as Microsoft, Huawei, Accenture, and Ceridian, among others. It also hosts the headquarters of the African Network Information Center (AFRINIC) – the regional registry for Internet number resources serving the African Internet community.

A 2015 report by Frost & Sullivan identified Mauritius as the country with the highest Networked Readiness Index in Southern Africa. In the same report, however, Mauritius ranked low in infrastructure and digital content (77^th^ out of 140 countries). The challenges identified for Mauritius include the limited coverage of its fiber-optic network (50,000 households out of 3 million in 2014), low penetration rate, slow Internet speed, and the low workforce impact (only 19,000 employments in the sector).

The National Computer Board’s projects include free Wi-Fi hotspots, mobile Internet access stations (Cyber Caravans), and training in different kinds and levels of digital literacy. The NCB has been successful in spreading awareness of and facility with technology.

Wi-Fi hotspots – Currently, the country hosts 350 free Wi-Fi hotspots by Mauritius Telecom, and have announced plans to introduce 250 more hotspots by 2019. The Cyber Caravan project – The goals of the project are to raise the level of knowledge about ICTs and to make Internet and computer access available to everyone in the community. There are currently three Cyber Caravans – equipped with 10, 21, & 21 personal computers (PCs), respectively, and broadband Internet connection – operating across the island. They travel to remote areas of the island and train different segments of the community over seven days, allowing residents to access the Internet and training programs with the devices and connectivity on board. As of October 2017, more than 250,000 people have been trained. ICT training programs - The National Computer Board offers various educational programs including educational video programs on Microsoft Office available to download on their website. Digital youth engagement program – In an attempt to promote interest for science, technology, engineering, and mathematics (STEM) among young learners, the NCB will offer introductory courses on Coding for fourth- and fifth-grade students in primary schools with the support of the Ministry of Education, Human Resources, Tertiary Education, and Scientific Research. The students will be provided with a 15-hour-long training course with PCs, laptops, Raspberry Pis, and tablets in the Cyber Caravans, which will scale to various primary schools around the island. Since 2017, the NCB has trained 1,611 youth on coding techniques, and estimates to reach 2,000 primary school students staring in 2018. In addition, 769 young people have been introduced to Scratch, a visual programming language developed by the Massachusetts Institute of Technology’s (MIT) Media Lab, to help them learn creative thinking and systematic reasoning skills. Furthermore, the NCB is also providing two-hour-long coding courses on code.org for youth in the Cyber Caravans. Community empowerment program – Under this ongoing program, which began in 2009, the NCB has set up computer clubs, learning corners, and public Internet access points. With sponsorship by Microsoft and the Mauritius Telecom Foundation, 270 Computer Clubs with three PCs and free Internet access have been established in various locations including youth centers, women centers, community centers, social welfare centers, daycare centers, and city halls and municipal buildings. In addition, public Internet access points are available in the 100 post offices in Mauritius & Rodrigues. ICT literacy training for women – ICT literacy training has been offered for women in Cyber Caravans, five hours per day over the course of a nine-day period. After completing the program, a certificate of attendance is issued for participants.

The Mauritius Government Budget for 2016/2017 announced 250 additional free Wi-Fi Hotspots will be set up around the island in major public areas, such as traffic centers, hospitals, municipalities and district councils, to reduce the digital divide and promote connected communities. Similarly, the previous budget catered for 350 locations in Mauritius to be equipped with Wi-Fi. Thus, the new budget measures will increase the total number of Wi-Fi hotspots in Mauritius to 600 in total.

The 350 Wi-Fi hotspots have been set up in community centers, social welfare centers, women centers, youth centers, municipality, district councils, schools, and public Internet access points (PIAPs). These locations are frequently visited by the public and offer the opportunity of the public to be connected freely to the Internet through a smartphone or laptop, in particular via its “bring-your-own-device” strategy.

The Wi-Fi radius coverage extends to 200-250 meters in the air, and 50 users can be accommodated simultaneously. The user should have a mobile phone (any operator) to send a Short Message Service (SMS) request for a PIN code to access to the platform. Content filtering is provided by the service provider, which manages the project remotely through its 24-hour hotline service.

The access points are placed in suitable positions for maximum coverage. MT provided the cable connections between routers to the various access points, while the owners of the locations have had to ensure reliable and safe access to electricity and a back-up power source, the security of the equipment being provided, and to keep the equipment powered on, once installed.

While Wi-Fi access is being promoted through the bring-your-own-device system, the needs of people who do not possess a smartphone or a laptop have also been concurrently addressed. This is critical since all segments of the population must have access to ICTs to achieve the government’s vision. As part of its mission to empower people, the NCB implemented the Community Empowerment Program (CEP). The CEP aims to enable the creation and sharing of information and knowledge for community development. A major component of the CEP began in 2009 when 270 computer clubs were established in collaboration with Microsoft and the Mauritius Telecom Foundation to provide free access to ICT tools and broadband Internet. The computer clubs contribute to the development of Mauritius by facilitating the democratization of ICTs in order to contribute in the alleviation of poverty, and bridge the digital divide through democratized access for the whole community.

Computer clubs provide ICT infrastructure for those who cannot afford a computer as well as large families that own a personal computer (PC) but require additional capacity. Each computer club has been equipped with around three PCs and free Internet access. Computer clubs were established across the island in 23 youth centers, 15 women’s centers, 128 community centers, 53 social welfare centers, 20 daycare centers and 31 nongovernmental organizations, municipal councils, and/or village halls. The 270 computer clubs set up around the island have had a positive impact on the community as well. About 1,500,000 registrations, including recurrent users, have benefited from the services provided, and there is continuously growing demand by students, unemployed individuals, stay-at-home parents, and senior citizens.

E-services are a large component of the project too. A total of 80 services are available, and 90 percent of tax services are now possible to complete online – as compared to none 10-15 years ago.

The NCB has recently redefined its strategies to respond more effectively to new national aspirations in view of multi-facetted challenges emerging in the wake of globalization and threatening the very resilience of the country's economy. Its core mission is to now accelerate the transition of Mauritius into a regional ICT hub, and ensure the swift realization of government's objective to make of the ICT sector a key pillar of the economy.

Coordination challenges – The main challenge in implementing such a project has been to transform the government’s various public-private partnerships into a concerted effort for community development and empowerment. For example, private companies wished to publicize their involvement and contributions, but government regulations prohibit the advertisement of private sector businesses.

Lack of skilled manpower – They are freelancers and are not well-compensated. As a result, there is a high turnover; so, maintaining consistency has been difficult.

Sustainability through simplicity – The project’s simple model makes it easier to replicate in any other country where partnership among different stakeholders is required and a proper project implementation is required.

User feedback mechanisms – The project aims to revolutionize the way Mauritians communicate, with each other, and hotlines are available for users to report any connectivity issues that may impede this. Most importantly, these ICT services are seen as key building blocks for Mauritius’ digital modernization, and are helping to create a digitally empowered nation that transcends social and economic barriers.

Collaboration with civil services – Their experience suggests that working with dedicated teams and support from the government in collaboration with the various ministries is important for the smooth implementation of new ICT services in a constantly evolving modern economy.

Community development – A large part of the project’s success is thanks to the project team’s attention to community development. Its training programs and accessible presence in public, community spaces have successfully made citizens aware of the value and possibility of ICTs, incentivizing them to invest in technology, and its future in the country.