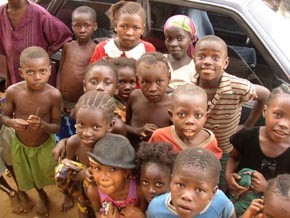 ChildHelp Sierra Leone is a recognized nongovernmental organization (NGO) founded in 1994. It is a social humanitarian organization with the national mandate to help child and youth through development, advocacy, and relief. After the Ebola crisis, ChildHelp aims to keep female students in school and encourage those who have never been enrolled to attend. ChildHelp focuses on the most marginalized and underserviced young women in particular communities of Sierra Leone and other parts of Africa. They provide technology to schools as well as offer school scholarships, mentoring for young women and distance learning facilities to older women. ChildHelp is an example of a multi-pronged intervention that needs a permanent funding pipeline.

Sierra Leone is small country located on the west coast of Africa. Since 2002, the country has been in the process of rebuilding itself after a long and devastating civil war. Gender discrimination, violence against women and girls, and detrimental traditional practices aimed at disempowering women continue to be rampant. According to a 2013 UNICEF report, 88 percent of girls and women in Sierra Leone have undergone female genital mutilation, and 39 percent of girls are married by the age of 18. Partially attributed to these factors, Sierra Leone has the fifth-highest maternal mortality rate in the world.

Children in Sierra Leone are required to attend six years of primary education and three years of secondary education, but a shortage of schools and teachers has prevented effective implementation. According to UNDP, 9.5 percent of adult women access secondary education or higher, compared to 20 percent for men. The lack of education is a main contributor to child bride practices. According to a World Bank report, girls with no education are up to six times more likely to marry than girls with a high school education. There are, however, both local and national initiatives targeting education for girls, which has brought the country a long way since the end of the war in 2002. One such initiative implemented by the government of Sierra Leone is the “Let Girls be Girls, Not Mothers” project, which is a two-year-long national initiative with an aim to reduce teenage pregnancy rate. Sierra Leone is also one of 12 countries selected to be a part of UNFPA and UNICEF’s Global Program to Accelerate Action to End Child Marriage. There are also local projects such as the Girl2Girl Empowerment Movement, which, through leadership and ICT training, support and educate girls about their rights, as well as sexual and reproductive health.

Through partnerships with several organizations, ChildHelp helps young women enroll in, return to, and stay in school. By increasing the educational opportunities afforded these young women, ChildHelp is working to end child marriage. Their current staff is composed of 23 individuals, 12 full-time employees, five part-time, and six volunteers.

One of ChildHelp’s most successful projects was “Unleashing the Power of Adolescent Girl’s Network through Information Communication Technologies” (UPAG/ICT). In partnership with the Internet Society (ISOC), ChildHelp provided digital literacy training and technology to students, female and male, in four different communities spread over three district areas. In these areas, ChildHelp built rooms that include technology and an Internet connection.

ChildHelp is completely funded through donations. This includes larger donations from corporations, nonprofits, and NGOs as well as aggressive campaigns on crowdfunding sites such as Global Giving Foundation, Indiegogo, and GoFundMe. Through crowdfunding, ChildHelp has raised US$ 46,000.

From 2007-2008, the project serviced more than 450 students through ISOC funding. The following year, UPAG/ICT reached 600 of the most isolated and disenfranchised young women in the communities as well as 300 male students. This two-year endeavor was paid for by a US$ 20,000 grant from ISOC.

ChildHelp has distributed more than 50 computers to various schools and ICT rooms for use by youth. In addition to the UPAG/ICT project, they provide scholarships, computer training, and access to the Internet to approximately 600 young women a year.An evaluation of the UPAG/ICT program for the 2008-09 academic year through in-depth interviews with community members yielded promising results. Respondents lauded UPAG/ICT for giving young women a safe place to congregate and a peer network to engage. Additionally, more than 90 percent of the young women interviewed at the completion of the project reported learning information that empowers them, from the program. More than 90 percent of young men realized that, as a result of their participation in UPAG/ICT, they were behaving inappropriately to women in their own households. At the completion of the 2008-09 academic year, ChildHelp turned the program over to a new organization called Champion Girls Club.

Building on their previous successes, ChildHelp has initiated a Girl Power project to help two “forgotten” new districts in Sierra Leone, Karene and Falaba, which were decimated by recent Ebola outbreak. In these areas, ChildHelp focuses on helping young women between the ages of 10-19 who have either left school or never attended. It leverages ICTs for this purpose.

Lack of sustained funding – ChildHelp often receives one-off grants that are not enough to sustain in the long term. Donations through the Global Giving Foundation, Anne Frank Fonds and Bradley families do not help meet the scholarship funds needed for 600 girls during the 2017-18 academic year. This severely cripples the reach and implementation potential of the organization.

Lack of transportation infrastructure – ChildHelp only owns a single car and two used motorbikes. Sometimes their students have to walk miles to school. They would like to provide a bus for or bicycles to the students to make this commute easier.

Lack of access to devices – Schools in the northern region of Sierra Leone lack ICT materials and tools. One of the 20 schools has between two and five computers at their disposal. Rural schools still do not have access to computers and the use of Internet. More refurbished computers, printers, and its accessories, including Internet facilities, are needed in strategic places for the rural communities to access ICTs.

Strong partnerships are essential – ChildHelp reports that building strong ties within the communities they service has been their strongest asset. With heavy community involvement, unplanned issues that arise are more quickly solved. ChildHelp also forms strong bonds with governmental departments, such as those addressing social welfare and education.