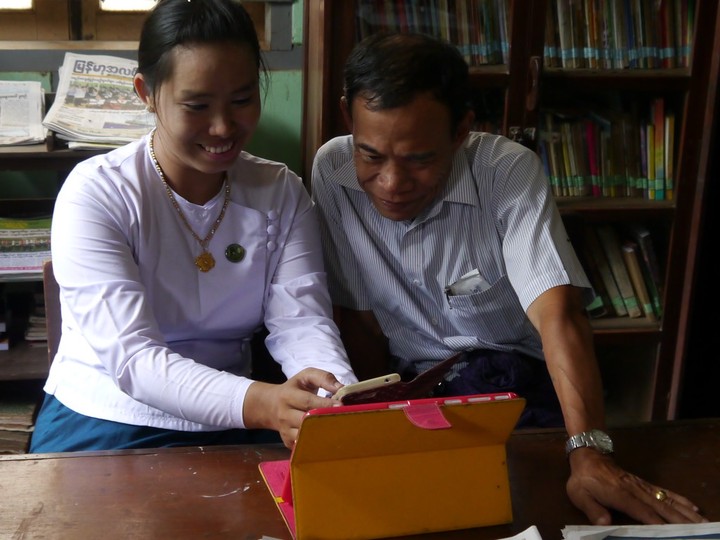 Beyond Access is a development initiative that focuses on strengthening the social power of public and community libraries around the world. By drawing on libraries’ pre-existing institutional and infrastructural utilities, Beyond Access is able to introduce long-term programs that use technology to meet the needs of the different communities it serves. Managed by the global nonprofit organization IREX and funded by the Bill and Melinda Gates Foundation, Beyond Access works with civil and state partners to transform libraries into sustainable public technology hubs. The initiative flexibly implements library programs in nine different countries along three different axes of focus: digital literacy and inclusion, financial inclusion and economic opportunity, and community solutions to improving literacy.

At 26 percent, Myanmar has the lowest Internet penetration in Southeast Asia, but experienced 97 percent growth within one year, according to Internet in Myanmar. Since media censorship was abolished in 2012 and the telecommunications monopoly was dissolved in 2014, there has been a boost in mobile phone penetration and Internet usage. Smartphone use totaled 80 percent in 2017, as reported by Digital in Asia. Most Internet users come from Myanmar’s two biggest cities: Yangon and Mandalay. Although Internet is quite widespread in the country, the speed is very slow, especially in rural areas. Additionally, despite the rate of mobile phone penetration, the digital literacy rate in Myanmar is quite low.

As in many other developing countries, one of the most pressing digital divides in Myanmar is between men and women. Women are 28 percent less likely to own a mobile phone than men; they also have much less access to computers and the Internet due to gender norms and social stigma, according to an IREX report. As a result, they have limited awareness of digital literacy benefits and reduced digital skills to approach more job opportunities. These barriers intensify for women of lower income, living in rural areas, and in ethnic states lagging behind in infrastructure and literacy rates.

Data shows that libraries are widespread throughout developing countries, yet are undervalued by social development projects. In Myanmar, there are 55,755 registered public libraries, but only 4,868 are considered active, many of which located in rural areas, according to a study by The Asia Foundation. There is also a system of mobile libraries available. People can visit libraries to read and borrow books and periodicals, while some use them as meeting places and community centers. Some can also access the Internet if they go to large, urban libraries. The quality of libraries, however, varies with respect to the availability of new books and materials, basic infrastructure (e.g., electricity, restrooms, etc.), and other resources, often at the disadvantage of those in rural areas.

Beyond Access has been active in Myanmar since 2014. They partner closely with a local nonprofit organization, the Myanmar Book Aid Preservation Foundation, to develop curricula and training programs in digital literacy for local libraries. With a network of more than 100 libraries across the country, Beyond Access seeks to boost access to technology in a number of different communities. A partnership with Ooredeoo, a major telecommunications company in Asia, provides tablets, routers, and Internet access for the libraries, which are used to facilitate a number of different community programs. Training is provided to librarians to provide services and outreach to meet diverse needs within the community.

In Myanmar, digital skills are unequally skewed between genders, largely due to public access computing being restricted to male-only spaces such as cafés. As a result, they launched a major project called Tech Age Girls, which serves to target the digital divide along gendered lines. This program, founded in 2008 and operating in eight different countries, provides digital skills training, peer networking, and mentorship to young women. Connectivity in public libraries already contributes significantly to providing opportunities for women and girls to learn information and communications technology (ICT) skills, but some cultural interventions are also required. To this end, Tech Age Girls supplements this availability with programs in leadership and empowerment for teenage girls.

Research showed that a year into the library program, 70 percent of users were men and boys. In order to increase participation by women, Beyond Access launched their Tech Age Girls initiative, where 100 girls have been connected to ICT and leadership training. They will continue to support new cohorts as the program continues, expanding their work into community service projects.

It is not only library users who have been positively impacted, but also librarians themselves are able to more quickly and inexpensively communicate with government ministries and funders. The Internet and devices have made the task of composing progress reports to the government cheap and easy. With knowledge and access to online resources, librarians have also become effective expediters between communities and the government, helping patrons access e-government services.

Rapid government turnover – The value of libraries rests in large part on their readymade integration in government funding structures. Political instability in developing countries, however, can pose challenges to the continuity of these programs as funding priorities may shift away from supporting community resources, social cohesion, and education.

Community resistance - Not all librarians are amenable to the notion that libraries should prioritize more than just books. It can sometimes be challenging to garner the support of library administrators for the inclusion of ICTs and digital literacy.

Global partnerships with local organisations helps – IREX does not have a physical presence in any of the countries where they work, so it is imperative that they partner with local organizations. This is not only a logistical necessity; Beyond Access’ funding policy is to contribute no more than 50 percent of each program’s total costs. This local buy-in element of the initiative contributes to the strength of each program’s sustainability, and Beyond Access' reports that their partners almost always succeed in raising more than the required half of the funds.

Nationwide networks for information sharing can be a good community gathering resource point – By networking libraries to one another, Beyond Access facilitates peer support between librarians in widely different areas of the country. Not only does this allow for knowledge sharing, but it also creates efficacious systems of social cohesion and care. For example, when floods displaced thousands of people in Myanmar, librarians within the network marshaled their resources to help those in relief camps or cut off from access to information. These modern library services were also of help to government relief programs, providing local information and communicating needs and numbers to federal aid officials.