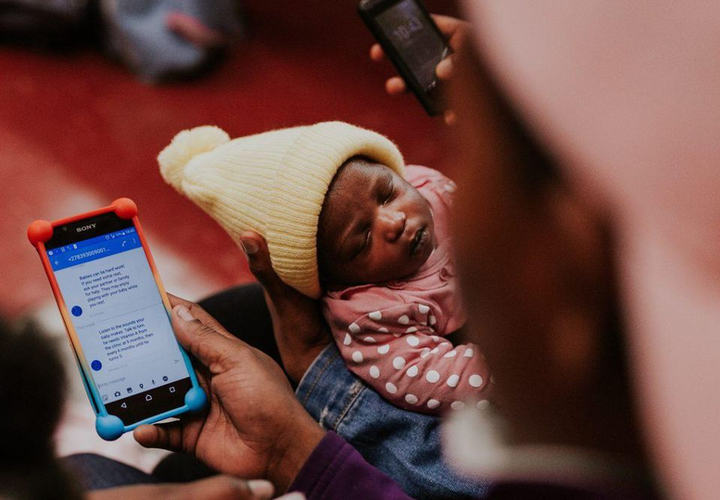 The Praekelt Foundation was started in 2007 as an offshoot of Praekelt Consulting in South Africa. They are a non-profit organization dedicated to building mobile technology to serve the world’s poor. They first projects included ‘text alert’ interventions designed to remind patients with HIV to make follow-up appointments and take their medications as scheduled. Currently, they have expanded this model into interventions like MomConnect, a mobile application that contains a library on maternal health topics, a messenger helpdesk, and the ability for mothers to rate the quality of their health clinic visits. MomConnect currently has 2 million registered users and has been officially integrated into South Africa’s healthcare system via the country’s Department of Health.

Mobile phone penetrance in South Africa is high relative to comparator countries and continues to grow, especially among young people. According to a 2015 report, over 70% of youth ages 14-18 own a cell phone, and 92% have used a phone in the past month. At the same time, 94% of pregnant women ages 15-49 own a cell phone, and the remaining 6% have access to a family member’s phone. Despite much improvement made to the healthcare system and national health policy after the dissolution of apartheid, significant health disparities exist. South Africa’s poor, black communities disproportionately suffer from high rates of teen pregnancy (1 out of 3 teenagers) as well as HIV infection. And while country-level maternal health indicators such as antenatal care coverage and skilled birth attendance have remained stable, studies show that inequality is increasing between the poorest quintile and the wealthiest in these measures.

Given these persistent health problems and concomitant high mobile phone penetrance, South Africa has been the target of many mobile health and phone application-based interventions. As of 2016, researchers have identified over 80 mHealth projects in the country. These projects vary in their target audience, from the general public, to certain subgroups of patients, or healthcare practitioners themselves. Most mHealth applications are targeted to basic phone users to ensure the broadest participation possible, and many utilize SMS. Most mHealth applications rely on donor funding, but for those who have or are trying to monetize, third-party advertising represents the most common strategy. However, the mHealth endeavor in South Africa is quite fragmented, with many organizations struggling to reach scale, and little communication between stakeholders such as the national government.

Praekelt is a South-African non-profit organization dedicated to building mobile technology to serve the world’s poor, founded in 2007 as an offshoot of Praekelt Consulting. Praekelt offers expertise in many areas, including software development, digital strategy and consulting, content curation, graphic design, branding, and user experience design and research. Praekelt’s first projects were the realm of text reminders; their program to send SMS messages to remind patients with HIV to take their HAART medications reduced lost-to-follow-up rates from 26% to 4%. Subsequently, they’ve expanded to work on a number of projects, including MomConnect, an application that shares antenatal and child health information with mothers in South Africa. Praekelt also spearheaded a Free Basics incubator in South Africa, building a point-and-click interface to help dozens of non-profit organizations design mobisites so their content could be hosted on the Free Basics platform.

MomConnect is an mHealth application led by the government in 2011 with the goal of national deployment, which enables pregnant women to receive information about their own health and also that of their infants. There are 150 SMS messages in the full program. These include health messages that address hypertension, HIV, and immunization for the baby until the infant is one year old. The service also enables interaction with a 24/7 helpdesk and allows women to give feedback to the helpdesk located in the national Department of Health. The system allows for SMS timing choices and return the missed calls to make sure the messages are received and seen by the users.

The content is available in 11 local languages. The system allows women to register for MomConnect in two ways: at their health clinics or self-register using a free of charge unstructured supplementary service data (USSD) number on their phones. The application includes stage-based health messages developed in partnership with the South African National Department of Health, a maternal health information library, a feature that allows mothers to rate the quality of healthcare they’ve received at clinics, as well as a messaging-based helpdesk to which users can submit their own questions. The application is free for users. As of 2017, Praekelt deployed a new version of MomConnect using WhatsApp Enterprise, migrating from SMS, allowing for a more interactive and user-friendly messaging experience, including the ability to send and receive photos.

MomConnect is the first nationally-integrated mHealth application in the world, receiving support from the National Department of Health, USAID, Johnson & Johnson, BabyCenter.com, and other sponsors. The application is partially monetized via market research opportunities, but includes no advertising or premium features for purchase.

MomConnect currently has over 3 million registered users in South Africa (comprising approximately 60% of pregnant women), and is available at 95% of the country’s healthcare clinics. The application has fielded almost 500,000 questions at its messenger helpdesk. Since rolling out WhatsApp Enterprise, helpdesk interactions have exponentially increased. The first 1% of users migrated to the WhatsApp feature generated 50% of the helpdesk queries. Praekelt points to the more engaging content possible with WhatsApp - including audio and images - as well as the secure encrypted connection as the reasons for the uptick in utilization. In 2015, a telephone survey was conducted with 10,000 registered users of MomConnect with a response rate of approximately 20% (1,980 respondents). Of the participants, 80 % felt that MomConnect messages had helped them remember their clinic visits and 75% reported that the messages had helped them feel more prepared for childbirth and delivery.

Most NGOs lack the technical expertise to utilize opportunities like Free Basics – This observation was the impetus for Facebook approaching Praekelt to establish an incubator to facilitate more non-profit use of the platform. In response, Praekelt built a point-and-click interface for NGOs to assemble their own mobisites, providing training, advice and other support materials. In this way, Praekelt was able to get more than 100 NGOs established on the platform.

The global ‘gag rule’ has been disruptive to maternal health interventions – Praekelt has chosen to focus many of their projects on maternal health because it both a prominent Sustainable Development Goal and possible to successfully intervene upon using mHealth applications. However, the ‘gag rule’ enforced by the Trump administration has been very disruptive to their funding streams in this arena, especially because it occurred without preamble.

Donor funding can be used to bring projects to scale, but is not an inexhaustible resource – In Praekelt’s experience, donor funding can be found for the period of time a project is growing, but cannot be relied upon to fund a project indefinitely. It is best to plan a realistic timeline for scale-up and seek funding accordingly.

Ensure you are tackling appropriate problems and have a reasonable chance of success – When you have a hammer, everything starts to look like a nail. Praekelt advises that you pick the problems you wish to address carefully, to ensure that they are something that can be addressed by an mHealth application, and avoid problems that are too complex or require a different approach. Similarly, an advantage of mHealth applications is their great reach - therefore, the problem should be a common one shared by thousands (or millions) of people.

Design for large scale (and the lowest common denominator) from the beginning – Praekelt advises that you build interventions with the broadest possible audience in mind from the very start. This means designing for the lowest common denominator: the most basic phone models, users with the least financial resources and lowest literacy rates. Praekelt does not include training modules in their applications, striving instead to make the user interface so intuitive that training is not needed. They say that telling relatable stories and using images are two important ways to extend the reach of a mobile application. Developing something overly complex or overly specific will hinder expansion.

Humility is an indispensible key to success – Praekelt emphasizes the importance of humility and active listening. When you design an mHealth application, the builders are almost certainly designing it for people who lead very different lives from their own. Even though they may read many of audiences’ stories, there is still much they do not know. Recognizing this and ceding to others’ expertise is important to the success of current and future interventions.

Partnerships are essential relationships that take time for trust to develop– Praekelt admits that working with partners can significantly complicate a project - however, partners are key to projects’ success. The most important ingredient in a successful partnership is time. It takes time to build trust between partners and demonstrate that the organization will deliver on promises rendered. Praekelt also points out the importance of carefully defining expectations at every step.