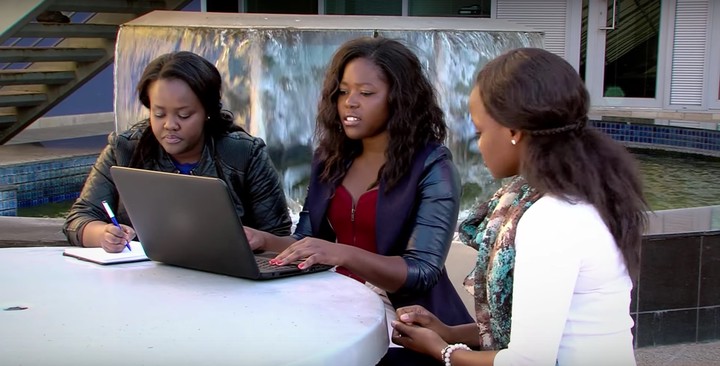 Beneficiaries of the She Will Connect initiative. Photo credit: Intel SheWillConnect

Launched in 2014 by the Intel Corporation in partnership with UN Women and local NGOs, the She Will Connect initiative aims to erode the gender gap in technological literacy in Africa. Intel offers women in Nigeria, South Africa, and Kenya digital literacy training, skills for creating user-generated content, and mentoring for entrepreneurship and job-readiness. As of 2017, the program has trained over 200,000 women in face-to-face trainings and reached over 2.5 million women through their online content. She Will Connect uses local partnerships to efficiently implement a project for a targeted population and remains flexible in deployment to meet the target population’s real-world needs.

“Women and the Web”, a groundbreaking report from Intel and Dalberg Global Development Advisers, was released in 2012. Exhaustive in its reach, the “Women and the Web” report used secondary data, field research, and surveys to track Internet accessibility and the digital literacy of young and adult women in 144 low- and middle-income countries. The report found a considerable gender gap surrounding Internet access in the developing world. On average, women are 25 percent less likely to have access to the Internet than men. At the regional level, the disparity grows. The gap increases to 30 percent in parts of Central Asia in Europe, 35 percent in South Asia, and to nearly 45 percent in sub-Saharan Africa.

In 2013, following the report, Intel launched the SheWillConnect Initiative to close the gender gap in Internet access in Africa. As a whole, the continent lags in overall Internet penetration, estimated to be approximately 29 percent in 2016.

The guiding aim of She Will Connect is to provide women in emerging markets access to connectivity and basic technological skills to empower them socioeconomically.

By partnering with local NGOs in the countries of Nigeria, South Africa, and Kenya, they provide resources to women along three axes – digital literacy, content, and support. Using Intel Learn Easy Steps™ modules, She Will Connect teaches contemporary functionalities of a computer, such as using email and creating an online resume. Secondly, She Will Connect has created copious women-relevant content that can be accessed during these trainings as well as on the organization’s website and Facebook pages. In addition, women are taught how to create their own user-generated content. Finally, beyond digital literacy, She Will Connect provides professional mentoring to women to help them find employment or become entrepreneurs using their new skill sets. Implementation costs vary by country.

Because of the general dearth of physical technology in many of the areas that She Will Connect services, the organization found that it also needed to provide hardware that was easily movable. Two mobile units are currently in use. The first is a repurpose shipping container that travels on the back of a truck and remains in a location for between one week and one month. The second solution, created by a Kenyan company, was to construct an “ICT unit” that could be transported via motorbike. This unit includes 40 tablets, a server, and 3G connectivity.

She Will Connect have conducted face-to-face digital literacy training for over 200,000 women in Nigeria, South Africa, and Kenya. To date, they record over 800 success stories of women who have started a job, a voluntary professional internship, or a business. In addition, through Facebook, they are able to reach 2.5 million women in 21 countries with their content.

Because the trainings are taught in English, She Will Connect pairs one woman who speaks English and one who does not on the same machine to ensure the training is comprehensible to everyone. This works to reaffirm bonds between women in the local regions. She Will Connect releases their content in three languages, English, French, and Swahili.

She Will Connect has found that the skills taught in the digital literacy class translate well from PC to mobile, and this can be an especially important empowerment tool in less developed nations.

In the case of South Africa, the government has recognized the importance of the digital literacy trainings and they have accredited the program. This national recognition means that women can more easily transition from the training to the job market.

**Lack of access to devices –**End-users oftentimes have no access to the technology provided during the digital literacy trainings in their own communities. In addition, there are also areas where there is simply no connectivity. Because access to devices and connectivity can be limited, She Will Connect needed to provide both the physical technology as well as the literacy training. The organization deployed two separate mobile units. However, because neither can put technology in the hands of the serviced population in the long-term, both remain stop-gap solutions.

Lack of affordable access– Even in countries where connectivity is available, costs are high and out of reach of many citizens.

Scalability – Without governmental funding or private donors, increasing the reach of the programming is severely curtailed. Similarly, a lack of policy support on a national level also impedes full population roll-outs.

Leverage existing structures and networks to maximize impact – By exploiting networks already in existence, such as the connections between local NGOs and women of the countries serviced, She Will Connect was able to easily access the population their targeted population. In practice, these local NGOs were able to orchestrate the trainings with the resources provided by She Will Connect. Online networks, particularly social media, can also be exploited. While She Will Connect primarily focuses on three countries, content on their Facebook page expands this reach to 21 countries. In addition, platforms such as Facebook are intended for the presentation of user-generated content which aligns well with the output of the digital literacy training.

Attention to cultural specificities is important – The cultural conventions governing women’s lives differs in each nation. For example, She Will Connect found that at certain digital literacy trainings, women were more reserved with men present. The solution, in this instance, was to create same-gendered trainings. Also, many times women were unable to dedicate two hours plus transit to attend a training because of work or familial organizations, so the literacy trainings were brought to them.