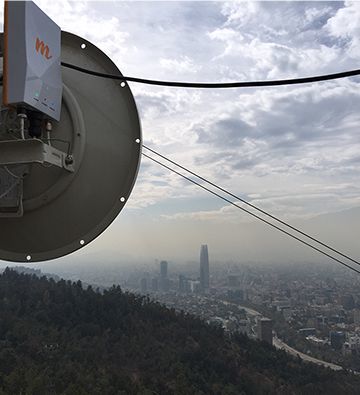 Mimosa is a privately-owned technology company from Santa Clara, California. The company provides 5G mobile fixed-wireless technology to Internet service providers (ISPs) as a low-cost alternative to fiber optics. Their technology makes efficient use of available spectrum, and is also able to avoid interference by reusing channels rather than wasting additional spectrum. They use multiple in/multiple out (MIMO) and Global Positioning System (GPS)-based synchronization technologies to extend the capacity of the spectrum and allow for repeated channel reuse without interference. Currently, their products are providing improved connectivity all around the world, from rural areas to densely populated cities.

Launched in 2012, Mimosa is a technology company whose products are used all around the world in a variety of environments, from underserviced rural settings to densely packed cities. Mimosa uses two main technologies, MicroPoP and GigaPoP, along with Spectrum Reuse Synchronization (SRS) to provide affordable, fast, and scalable Internet connectivity solutions. Additionally, unlike fiber-optic connectivity, Mimosa’s 5G, fixed-wireless solution offers a return on investment that can be delivered within six-to-12 months on average.

Spectrum Reuse Synchronization – This technology allows for ample scaling of wireless networks by eliminating outside interference through highly coordinated transmissions. This allows access points to reuse channels and make efficient use of the limited available spectrum. This allows for greater subscriber capacity, which is useful in densely populated areas, and faster speeds.

GigaPoP Broadband Architecture – Used in rural areas where there are limited options for tower locations, this technology allows for scaling of existing towers in addition to allowing for new locations by reusing spectrum. In rural areas, ISPs face issues of line of sight and distance; this can inhibit Internet quality and speed, so new towers and base station sectors must be built. GigaPoP allows for sectors to be closer together and with the help of SRS, subscriber capacity can be increased with no additional interference.

MicroPoP Broadband Architecture – This technology is used in dense urban and suburban areas. It targets 250-500 megabit per second (Mbps) speeds, and its price is comparable to that of digital subscriber line (DSL), cable, and fiber. Each deployment of MicroPoP is able to serve 400-1200 households per square kilometers, which is the typical density of their suburban residential markets.

Through the use of the above technologies, Mimosa has been able to achieve last mile connectivity as well as provide 5G fixed solutions for competitive underserviced markets.

Mimosa has been successful in overcoming the typical issues faced by ISPs including line of sight, foliage, and distance in rural areas as well as limited subscriber capacity in densely populated areas.

Mimosa’s networks have been deployed around the globe. Some examples include:

Houston, Missouri – In the town of Houston, MO, Mimosa teamed up with a rural power cooperative’s communications subsidiary to bring high-speed Internet to the town. Since utility companies often already have networks in place due to their previous business, Mimosa helps them bring fixed wireless into the communities they service.

Swiss Wrestling and Alpine Festival, Switzerland – The organizers of this festival appointed Swisscom to deliver the network for this event. In attempting to connect nearby temporary restaurants, fields, and a campsite to the network, Swisscom realized they needed to upgrade its backhaul solution due to obstacles such as radars from a nearby Swiss Military Airforce Airbase. Mimosa provided backhaul radios that were optimal for maintaining link stability.

Sofitec, Spain – This leader in the aerospace industry was moving to expand operations with a new plant in Southern Spain and needed a point-to-point network that could handle high interference and great distances. The company sought out Wellness Telecom who recommended the Mimosa B5 backhaul radio as the prime solution.

Boundless Networks, U.K. – This wireless Internet service provider was looking to become the U.K.’s best broadband provider in rural areas. In order to do so, the company needed to upgrade its backhaul system to better provide more stable, robust, and reliable high-speed connections. They decided to use Mimosa’s technology, which enables improved performance for an increasingly congested space.

XCIEN, Mexico – In Mexico, an ISP called XCIEN, whose backbone network covers more than 4,000 km^2^ and eight Mexican metro areas, wanted to provide reliable, high-speed Internet to subscribers in both dense urban areas and remote rural locales. By using Mimosa’s technology, they were able to cut installation times and spike speeds their customer’s would receive. In addition, XCIEN was able to cut its costs by 25 percent.

Regulatory challenges – Mimosa operates and sells their technology all around the world, including many developing countries such as Brazil, Argentina, Chile, and Mexico. They have also worked in India, however, the country is not regulatory favorable. Mimosa is an unlicensed technology company and in the Indian market, most of the spectrum is licensed or used illegally. Additionally, Mimosa has found that while demand is particularly high in developed markets such as the United States, these are also the areas hardest to operate in because they have the most rules and regulations surrounding this type of service.

Differences in partners’ capacity– In the developing world, there may be fewer rules and regulations surrounding the wireless Internet industry; however, Mimosa must deal with ISPs that have very little revenue. These providers tend to build at a much slower pace, as they might only have a few dollars per month as revenue from their subscribers.

Varying markets have varying needs – Depending on the level of maturity of the pre-existing wireless technology in the target market, different technologies, architectures, and strategies must be used to provide optimal service. For example, in developing markets such as those found in Brazil, Argentina, Chile, and Mexico, there is very little fiber-optic cable interconnecting towns; thus, these areas are already accustomed to doing backhaul between two villages. As a result, Mimosa’s technology gained traction relatively quickly in those fixed wireless markets. In Mexico, Mimosa started to see that even newly populated areas lacked necessary infrastructure and with a higher density in these areas, it became necessary to leverage spectrum reuse rather than relying on traditional fixed wireless.

Versatility is important while serving diverse markets – The variety of products and technology that Mimosa offers allows the company to service different areas with different needs. For example, Mimosa has been able to partner with satellite companies in parts of Africa who have found the most cost effective method to be bringing a satellite signal directly to the village and then using Mimosa’s gear to distribute it with point-to-multipoint, and then further distribute Wi-Fi at the end of those points. In areas where the need is in last mile connectivity, Mimosa is able to utilize its GigaPoP technology whereas in higher density markets, smaller MicroPoP hub locations are effective.

New trends and customers should be sought out – In cities, Mimosa has recently seen utilities companies stepping up to leverage their own infrastructure, which has led to regionalization of utility companies. These companies are using their advantage over outsiders to expand their services to not only include gas and electrical but also Internet. These companies already have the work force necessary to complete the job as well as the concept of being able to offer services to people in their market.