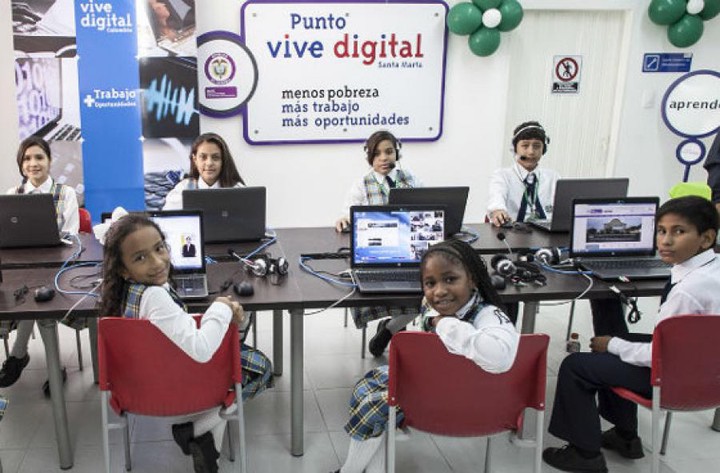 Kioscos Vive Digital (KVD) is an Internet access and telecommunications technology service provider and training program working to close the digital divide in rural Colombia. The program provides digital kiosks that act as community Internet access points for children, youth, and adults in rural areas with more than 100 inhabitants, located in the most remote areas of Colombia. The kiosks enable anyone using their services to connect to the Internet, and receive free training in accessing and using the Internet, computers, and other information and communications technologies (ICTs). The project operates under the auspices of the Ministry of Information Technology and Communications (MinTIC) to provide satellite Internet services to communities that, due to their geographic remoteness and/or infrastructural limitations, were not included in the National Optical Fiber Project. Some of the programs and services outlined in the Universal Service Fund are dependent on Internet access for their efficacy and availability, so the project provides the necessary Internet services

Colombia is committed to employing ICTs to promote a knowledge society and modernize the country, as the 10-Year Education Plan 2006-2016, its “Vision 2019” document, and the National Plan of New Information and Communication Technologies demonstrate.

The National ICT Plan 2008-2019 proposed a set of policies, actions, and projects to bring about the efficient and productive use of ICTs among all Colombians, with the aim to improve social inclusion and increase competitiveness. Furthermore, MinTIC’s National Broadband Policy has increased the percentage of Colombian municipalities’ Internet connectivity from 17 percent in 2010 to an impressive 96 percent in 2015.

The Ministry of Education has also launched several initiatives to address digital literacy, including a pilot project to train teachers, students, and parents with 1,500 donated Intel computers in 2007, and a project that loosely translates to “Path of ICTs Appropriation.” Launched in 2008, the project aims to increase teachers’ professional development. Moreover, through the 899 Puntos Vive Digital (community Internet centers), 100,771 people have received digital literacy training.

Due to the lack of competition, both fixed-line and mobile Internet services in Colombia are among the most expensive compared to Organisation for Economic Co-operation and Development (OECD) countries. The average Internet speed in Colombia in 2013 was only 3 megabits per second (Mbps). High-speed Internet is a luxury product, and only 0.7 percent of the country’s broadband connections were faster than 10 Mbps in 2011, according to the OECD.

The connectivity inequity is particularly severe between urban and rural areas. Most Colombians live in cities, where the major Internet service providers (ISPs) are located and hold significant market power. These telecommunications firms are not interested in expanding the network to rural areas, leaving the population far behind. The government is actively organizing several projects to resolve this market failure, including its 13 billion-peso (US$ 4.55 million) “Free Wi-Fi for the People” plan to establish 1,000 free public Wi-Fi spots across the country.

Kioskos Vive Digital provides satellite Internet connectivity and services in more than 7,000 rural Colombian communities through community-based telecommunications centers. The kiosks are publicly accessible and installed primarily in schools, but also in homes, community centers, pharmacies, and shops. The program targets schools as installation sites so that the computers and services can be used for educational purposes during school hours, and then opened to the community at large at the end of the school day. In addition to the Internet, users can access other services such as telephones, scanners, printers, and photocopiers.

The program offers various levels of training services that educate users about how to use these technologies, and most users only use the trainings offered for basic Internet and computing access.

Each Internet access point costs US$ 87,000 per year to operate. A kiosk costs US$ 20,000 up front to install, and the remainder is the annual operating cost. Each kiosk is equipped with a telephone, a television, a copy machine, between two and five computers, and both broadband (4 Mbps) and Wi-Fi Internet. Users pay a nominal fee of 200 pesos (US$ 0.07) per hour for use of the service. The cost is set deliberately low and is not a meaningful source of revenue, but rather is intended to symbolically habituate users to paying an ISP.

Although the project has been operational since 2001, its development proceeds in four-year planning increments. It is currently operating under the Vive Digital Plan 2014-2018, which includes a three-phase implementation strategy built into its design. In phase one, ICTs already installed by KVD in a number of rural communities were supplemented with training programs developed according to the interests and needs of each region. Phase one ended at the beginning of 2016. During phase two, an additional 5,524 kiosks were installed in schools for educational and community use, with the specific aim of enabling communities to use and access other government services that are Internet-dependent. In phase three, an additional 1,231 kiosks were installed. As part of the National High-Speed Connectivity Project, 953 more kiosks will be installed in the Amazon, Orinoquía, and Chocóas regions as well, where 130 of those have already been installed.

KVD trains approximately 20,000 people per year across all 7,000 locations. The initiative has been successful where installed because Internet services are necessary to access many government services, there are no competitors, and users like the service. The training programs are also well attended, but mainly at the basic level. More advanced and specialized training programs are less used. KVD uploads user success stories to YouTube, and they maintain a digital map of their service locations.

At present, KVD has installed and provides services to 7,000 locations nationally. This is insufficient given that, of the 43,000 public schools in Colombia, approximately 34,000 of them are rural schools where kiosks could be installed, but there is not sufficient funding to scale the project up to meet that need at this time.

Lack of power infrastructure – Internet access requires electricity, which most of the areas served do not have. KVD has been implementing solar power alongside its kiosks in order to make them functional, but this adds a burden to their operating and installation costs. The installation of fiber-optic cables for telecommunications and Internet takes a prohibitively long time and is urban-centric, which is itself a challenge. As a consequence, they are reliant on satellite technology to provide services, which is more expensive.

Fluctuations in governmental support – At both the local and national level, the project experiences the challenge of government support and resources being prioritized elsewhere. At the local level, it can be difficult to establish the Internet as a priority among leaders in communities that lack basic services and electricity because it seems like a less pressing concern. But access to basic services often depends on or is facilitated by having access to the Internet and vice versa. At the national level, funding priorities change with administrations. Financing is on a four-year cycle, so KVD has to produce a new business plan every term, making long-term planning and growth difficult. The universal services fund out of which government sponsorship for KVD emerged also sponsors a variety of rural programs (e.g., healthcare and educational initiatives) that are themselves dependent on Internet service, which requires significant technical support. There is some ambiguity about whose fiscal responsibility such support is as well, which adds to the operating costs of the KVD project.

Long term planning made difficult – The four-year cycle of governmental administrations makes long-term planning difficult. Ideally, the program would be operated with long-term initiatives that are more apace with the protracted timescale of infrastructural development. Presently, however, they can only count on being able to complete initiatives that can be resolved before a new set of budgetary priorities cycles in. Only 7,000 of Colombia’s 34,000 rural schools are served by KVD because there is not a sufficient or reliable budget to sustain more.

Innovative alternatives in rural infrastructure exist and should be capitalized upon – Fiber optics can take years and even decades to install in urban environments, and longer still in rural ones with less robust infrastructure. There is a need for alternative means to provide Internet services in the meantime so that remote communities are served. Satellite is one way, but it is expensive.

Community engagement and government support are essential – Local governmental and community support for the project are vital to its success. Local leaders build communities of skills-sharing around the training, enabling users to teach each other how to utilize the services.

Accenting for timing and planning cycles is necessary – Planning time is crucial. Initiatives are most effective when matched to the time cycles of the governmental agencies that are dictating budgets and funding allocations, even though ideally they would be able to plan with a larger vision.