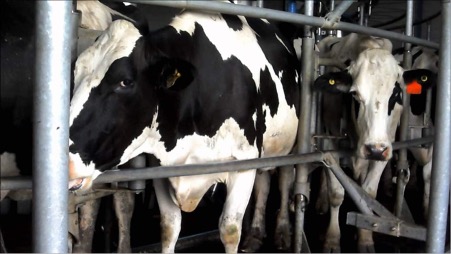 Tambero is a web application launched in Colombia in 2012 that provides tailored information to farmers about how best to manage their livestock and crops. Farmers enter information about the type of food they are cultivating and the animals they raise; Tambero utilizes the entered data as well as information about the local environment to provide farmers with evidence-based recommendations about best farming practices in a language they can understand. For example, Tambero can advise farmers on what date they should stop milking cows in order to maximize yield during calving season. This knowledge is important to share, as many of the world’s 570 million farms (of which 72% are less than 1 hectare in size) are not producing to their full potential, limiting the livelihoods of farmers and risking famine. Tambero now has over 200,000 registered users located in Benin, Colombia, Iraq, Mexico and Peru and other countries across the globe. The web application has a free version, which most of its users employ, but also ‘premium’ and ‘pro’ options. Tambero is currently exploring means of monetizing the web app via third-party advertisements and sales of much-needed agricultural goods.

There are an estimated 570 million farms in operations in the world today. While the average farm size in developed countries is quite large, 72% of farms worldwide are less than 1 hectare in size. Seventy-six percent of farms are family farms, meaning the family provides the labor to cultivate the land. Agriculture is the single predominant economic activity in rural areas of the developing world. However, despite agriculture’s preponderance as a way of life, the world’s population is outstripping the global supply of food, exacerbated by overconsumption and waste in wealthy countries. Many small farms lack essential resources to produce to their full potential, and are disconnected from technology and information that would allow them to bolster their crops.

Many challenges beset small farmers in rural communities worldwide: they lack accurate weather forecasting data, climate change has depleted water sources, rural-urban migration has drained human resources available to work the land, and techniques to improve soil quality remain out of reach. In the absence of key information and technology, farmers often resort to traditional farming techniques that have allowed them to survive, but means the average farm produces significantly below its theoretical yield. Mobile phones have made dramatic improvements to small farmer’s working lives: farmers frequently utilize cell phones to network with clients and schedule trips to the city to sell their products. In this way, mobile phones have also helped farmers set the best prices for their goods. However, dedicated, accessible mobile phone resources for agricultural best practices remain few and far between.

Tambero is a web application for farmers that was first started in 2012 in Colombia. The application allows farmers to enter details about the types of crops they cultivate and animals they raise, and in return, provides key information about the management of such resources. For instance, Tambero can calculate how late to milk cows before calving season, or what crops to rotate in order to keep their soil as healthy as possible, and notify farmers in real-time. Tambero incorporates local data such as country vaccination regulations and weather patterns to provide feedback about keeping livestock and crops as healthy as possible. At the same time, Tambero collects prospective data about what techniques produce the best results, so that similar methods can be recommended to other farmers in that geographical area.

Tambero’s web application is designed in such a way as to minimize inputs that busy farmers have to enter while providing the most useful, relevant advice. The application is designed to work well on feature phones and older computers for speed and ease of use. Much of the content utilizes images and icons, minimizing text, and is available in approximately 20 different languages. The organization solicits users to help to expand, recruiting farmers to help translate content into more local languages. Users can also provide feedback within the application itself and via the applications Facebook page. Tambero is currently free for users and is part of the Free Basics (Internet.org) platform, but there are also subscription-based pro- and premium versions available. They employ 8 full-time staff to oversee the running of the application. Tambero is testing means of monetizing the application to third-parties by recruiting companies to advertise their agricultural products to users. Eventually, Tambero hopes to serve as a marketplace to more effectively connect farmers to their customers in cities, in addition to facilitating farmers’ purchases of their agricultural supplies.

Tambero now has over 200,000 registered users and millions of visitors operating farms around the world, with the largest user bases located in Benin, Colombia, Iraq, Mexico and Peru. The average user is approximately 30 years old, and about 80% of users are male. Tambero is now working to develop its marketplace feature to connect farmers with customers located in cities. They are also building a “checklist” feature to be implemented in conjunction with a university in Argentina that will allow farmers to assess the needs of their farm and make recommendations about what supplies to purchase that will be most helpful.

Tambero has a free version (Free Basics) that drives most of its traffic, with Tambero Pro accounting for 5% of their user base and a Premium version. Free Basics enabled Tambero to expand rapidly. While a small start-up with only 2-3 employees, and offering only Spanish versions of their application prior to partnering with Free Basics, Tambero has grown rapidly to become a global company with 8 employees and diversified their language offerings to 12 languages in India alone. They are currently testing a feature that allows users to analyze their farm and recommend best practices, currently only in Spanish and English. They are also integrating a feature to allow for price-setting by farmers.

Generating valuable output with limited input – According to feedback from their user base, Tambero notes that it is difficult and time-consuming for farmers to enter information about their farms into the application. The challenge, therefore, is to convey useful information to users with minimal inputs. Tambero aims to generate value for farmers with less than 1 minute of data entry required.

Fostering a digital culture in the business of farming – Tambero notes that different industries exist on a spectrum of digitization: banking and insurance for example, are among the most digitized business in the world - almost every task utilizes a computer of some kind. Farming is among the least-digitized enterprises, but doesn’t have to remain that way. Currently, farmers frequently regard technology as a ‘waste of time’ that brings little benefit. A change in norms must occur before people will feel that investing time in digital technology can pay real dividends.

Alternative options for digital payment – Although Tambero has a pro and premium version of the web application, few users pay for these services. One of the barriers to this additional functionality is that many small-scale farmers do not have access to the usual digital payment channels - they don’t have credit cards, and many have never bought anything online before in their lives. New methods of making digital purchases must be developed.

Diversify content to create value for as many different types of farmers possible – Tambero has received feedback from users on many occasions asking them to expand their offerings to include best practices for additional species of animals and crops, which they have accommodated as much as possible. Tambero says it is important to increase the breadth of the content on the application as much as possible, so they can deliver distilled pieces of valuable information that will help as many farmers as possible increase their yield.

A simple, streamlined interface is a key to success – In response to strong feedback from users, Tambero has redesigned their app to require minimal upfront data entry from farmers before providing them with best-practice farming recommendations, as farmers were unwilling to take time out of their busy days without guarantee that the tool would be useful for them. Similarly, Tambero ensures that the web application is streamlined enough to function well on old machines and phones, and is not a drain on user’s data.

Latin America and the Caribbean Agriculture