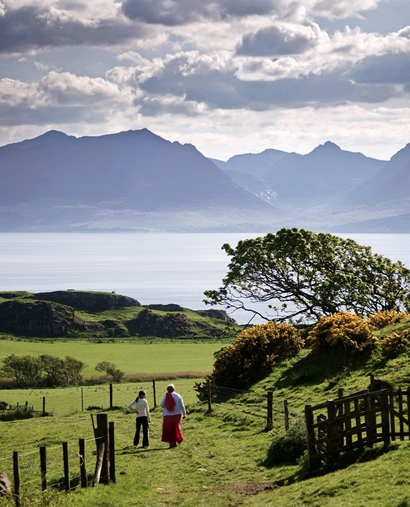 Broadway Partners is a United Kingdom-based wireless broadband provider that has operated since 2016. They use a mix of TV white space (TVWS) and 5-gigahertz (GHz) technologies to provide comprehensive connectivity. They target regions impossible to connect with fixed wireless broadband as well as communities underserved or priced out by existing broadband options. Broadway Partners hopes to make high-speed Internet access both widely accessible and affordable, and have deployed in a mountainous island in Scotland, Arran.

Located off the southwest coast of Scotland, the Isle of Arran – or simply Arran – is often referred to as “Scotland in miniature.” Arran is divided into highland and lowland regions and shares the Highland Boundary Fault with Scotland. The south side of the island mostly consists of lowlands and pastures, while the north is rocky and mountainous. The population is approximately 4,600, and nearly all of its inhabitants are elderly individuals, agricultural workers, and those in the hospitality industry. While year-round residency is low, during the summer season, the island’s population increases to about 25,000 people.

In an attempt to increase connectivity across Scotland, the government initiated the “Digital Scotland” project. One of the implementations of this endeavor engages British Telecom (BT), the UK’s most popular broadband provider, to install 800 kilometers (km) of fiber optics and 400 km of cable under the sea. This seeks to bring better connectivity to more than 700,000 Scottish citizens; however, budgetary and practical constraints leave about 5 percent of Scotland out of the “Digital Scotland” initiative – Arran is one such location.

Broadway Partners chose Arran for its initial implementation project for two reasons. The first reason was the island’s extremely limited connection to the Internet. The second reason was Arran’s well-known appellation: “Scotland in miniature,” which acted as a key marketing tool for Broadway Partners, whose aim has been to radically upscale its connectivity offerings.

The project began with a very small coverage area in the village of Machrie on Arran’s west coast. As of June 2017, 120 of 400 homes are newly connected to high-speed broadband Internet. Ten percent of these homes are serviced by the hybrid network’s TVWS technology. Similar to Arran as a whole, Machrie’s permanent residents make up only a small percentage of its households, a large number of which are seasonal holiday homes. Thus, this number is quite wide-ranging in its coverage.

Broadway Partners’ comprehensive service is largely dependent on its hybrid network, which incorporates fixed broadband wireless Internet with TVWS – a technology made possible by very recent research into uses for unused TV channels. Fixed broadband relies on clear line-of-sight for Internet connection to function properly through radio signals, making certain sites impossible to connect. TVWS, however, has no line-of-site requirements, and utilizes unused analog television frequencies to provide high-speed Internet. By partnering with Microsoft and researchers at the University of Strathclyde and King’s College London, Broadway Partners followed in the footsteps of several recent TVWS implementation projects in the U.K. and around the globe to introduce this new technology to Machrie in 2016. The Scottish government is subsidizing this deployment to the tune of 300 pounds per resident, in order to make connectivity affordable. Broadway Partners is currently expanding the network to cover all of Arran.

Broadway Partners is still in the early stages of its development and expansion, but they have made significant headway on their pilot in the village of Machrie in Arran. In addition to Arran, they have initiated similar projects in Inverness, Scotland, as well as northern Wales. They are currently looking to expand their program to unconnected and/or low-income communities around the U.K. and possibly abroad.

The hybrid network in Arran has exponentially increased Internet speeds from 0.2 Mbps to 10-100 Mbps. Elderly residents of the island are able to communicate with family members situated elsewhere and allow for remote health monitoring. One elderly resident’s family has CCTV cameras and a panic button installed inside her home; the button triggers a video live stream so the family on the mainland can immediately seek help in cases of emergency.

Residents of Arran use the Internet to connect with family and friends abroad. One resident reported being able to reconnect with family that had relocated to Australia, which had been difficult in the absence of connectivity. Before this deployment, the few residents who were connected could only use text-based emails and were not able to send or receive attachments. Now, media sharing is fast and easy, making attachments such as family photos and videos newly possible to exchange.

One resident used to depend on a weekly, six-hour round-trip commute to Glasgow for car auctions for work. Now, he can conduct his business efficiently from his home, saving time, energy, and money. Another resident, who works as a gamekeeper, has started to use web-based cameras to more precisely and efficiently track the activity of the black grouse for which he is responsible.

New technology – TVWS is a relatively new technology that has not yet been widely implemented. Broadway Partners found it necessary to experiment with a range of installation practices, placements, and distances in order to successfully bridge the gap between theory and practice.

High costs of an island trial – The complications of serving a small island community were not easily overcome. Certain kinds of standard installation equipment, such as cherry pickers, were not available on the island. This forced the installation team to improvise with their installation and access techniques. The expense, time, and challenge of receiving parts and materials proved unexpectedly onerous. Once materials arrived, there was the additional problem of transporting materials for infrastructural construction to remote areas, often on very high ground. The company found it difficult but not impossible to overcome these challenges.

Lack of sufficient community engagement – Some members of the community were unwilling to let their property be used for equipment placement without significant monetary compensation.

Government subsidies help deploy new infrastructure in remote areas – A major reason that connectivity is so affordable in this case is due to the £300 (US$ 406.71) subsidy offered by the Scottish government to cover the high cost of installation. This voucher takes the financial burden of installing new infrastructure off of the consumer and assures widening access to high-speed Internet. Programs like this one, which rely on the implementation of new and fairly expensive technology in underserved areas, would be well served by the government shouldering the expense of equipment and installation.

Hybrid networks combining multiple technologies may be necessary for certain regions – Broadway Partners is able to offer complete coverage in the areas they serve because of their hybrid network. They use a combination of technologies to build a network that is able to efficiently and affordably harness existing resources and supplement them with new technologies where necessary.