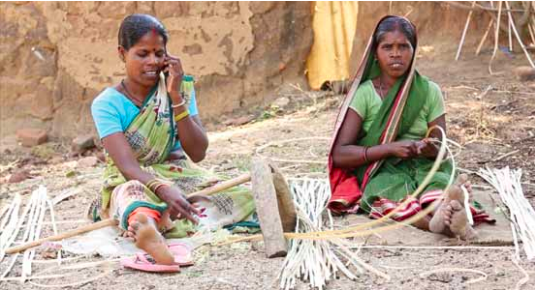 Vihaan Networks Limited, in partnership with the Ministry of Home Affairs in India, decided to build a mobile phone network in areas prone to left-wing extremist violence. This network -- the world’s largest green mobile network -- offers voice and mobile data connectivity to deprived millions in affected Indian states. These regions include some of the most challenging terrain in the country, with practically no roads, power or security. Vihaan Networks Limited has helped BSNL set up 2,199 solar-powered mobile communication towers in 18 months, altering not just the geographical, but the social landscape of the area.

The Red Corridor is an area under the influence of Left Wing Extremists (LWE) or Maoists in India. The groups tend to seek State power by violent means. Their presence has considerably gone down from nearly 200 districts across 20 states a decade ago to 106 districts across 10 states: Andhra Pradesh, Bihar, Chhattisgarh, Jharkhand, Madhya Pradesh, Odisha, Telangana, Uttar Pradesh, West Bengal and some northern fringes of Tamil Nadu.

The Indian government considers the group an internal security threat and launched counterinsurgency in 2009. Ever since, the number of casualties, especially civilians, has increased. According to India’s First Post, counterinsurgency experts believed that the problem in controlling Naxalism lies in “the nature of security forces deployed in Red Corridor, combat strategy, lack of coordination in sharing of intelligence inputs between the Centre and the state, and the lack of a national policy.”

Left-wing extremists are present in around 10 states of India. These states are often poor, under-developed, inaccessible and in heavily-forested regions with almost no infrastructure. The Ministry of Home Affairs in India decided to set up of a robust communication network to combat insurgency-hit areas in India’s Red Corridor, to support counter-insurgency operations and promote economic development in the region.

To address these needs, Vihaan Networks Limited (VNL), a telecommunication company that develops end-to-end infrastructure products and solutions, has set up 2,199 mobile communication towers across 10 affected states in India in 18 months. A majority of these, 1,315 towers, are live and maintained by VNL, which facilitates innovative wireless communication solutions for rural and remote locations. The government supports the project as to mainstream political dialogue, which entails increased information, access to e-governance, and banking and business opportunities.

Designed and manufactured indigenously, VNL’s WorldGSM solution consists of low-power base-stations beaming 2G voice and data signals within a radius of 5 km each, networked with the nearest BSNL exchanges. Wireless backhaul and subscriber management is provided by BSNL. All sites are solar-powered, with battery-storage for 5 non-sunny days.

Deprived citizens, most living on the edge of poverty, now have a window to the rest of the world, as they start using mobile phones to connect with families, employers, doctors, local bureaucrats and politicians. This connectivity has enabled better education, access to agricultural inputs and markets, finance and banking, and opened avenues for small businesses.The project is deployed by VNL and funded by the Universal Service Fund.

The project has connected approximately 18 million citizens across 22,688 villages, of which 3.9 million are mobile connections. The project is energy-efficient and entirely solar powered.

Connectivity has helped communications, in areas bereft of roads, railways and electricity. Inhabitants are also able to access information on agricultural inputs and markets. Banking and other commercial activities are easily accessible. Emergency and other health services have been used to save lives. The VNL network also helps maintain counter-insurgency operations. Security personnel can also stay in touch with their families.

The provider, BSNL has also made substantial progress to reduce its carbon footprint by substituting solar energy for traditional power sources and diesel generators. This has helped save approximately 78,900 tons of carbon dioxide that would have been released into the environment.

Land acquisition – Finding locations that can be appropriated from the agricultural, foresting, and tribal structure of the service locations in order to erect infrastructure for broadcast towers is a challenge.

Disruption by extremists – Infrastructure is prone to disruptions by violence and acts of vandalism by extremists. Maintenance and security in remote locations proves to be a challenge.

Communications networks can serve development goals even in high-risk areas -- ICT is crucial not just for closing the digital divide but can also serve to reconfigure social relations and stabilize volatile political factions.

Security and maintenance of large networks needs to be accounted for – Theft and vandalism pose a significant threat in high-risk areas. Security therefore must be given high priority while planning such projects.