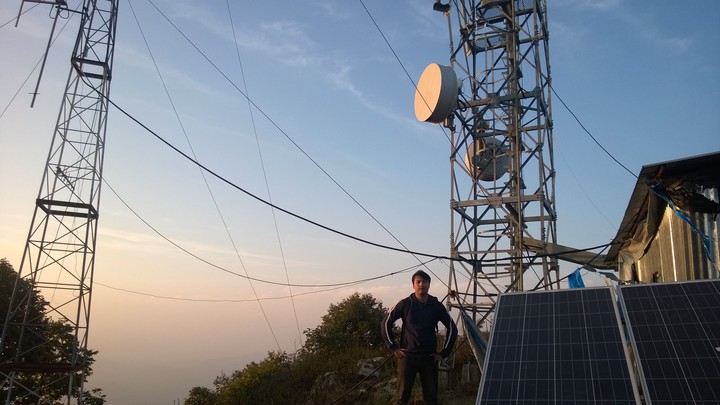 Using a site-based hybrid technology approach that combines TV white space (TVWS), fiber optic, and line-of-sight service, Unlimited Wireless Internet from Picosoft provides fast, high-speed Internet service in rural areas of Nepal where cable and asynchronous digital subscriber line (ADSL) Internet are not available. Picosoft donates and installs computer labs in public schools in rural Nepal and provides connectivity to those schools and to government offices. The project is dedicated to providing rural Nepal with an alternative that is faster and less expensive than satellite Internet. The project currently serves a total of 16,800 students across the 20 schools as well as 14 government offices with more than 200 government officers. In association with the Microsoft Innovation Center, they provide web development services, digital literacy training, and e-governance services to the people of Nepal.

Over the course of a decade, Nepal witnessed a 17-fold growth in the number of Internet users: from only 1.1 percent of the total population in 2006, to 17.2 percent in 2016. This constitutes the addition of approximately 4.9 million Internet users, according to Internet Live Stats. Together with the increasingly cheaper mobile phones, mobile Internet use in Nepal has grown rapidly, accounting for the majority of subscribers. However, Internet users and quality networks are concentrated in the major cities of Nepal, leaving the rural areas with scarce-to-nonexistent Internet connectivity.

According to a research by Nischal Regmi and Martin Chautari, Nepal’s 2017 household Internet penetration was estimated to be around 7 percent. Public Internet is available at a limited number of cyber cafés in cities and a few piloted free public Internet centers. In these places, Internet quality was found to be substandard, such as the Internet bandwidth subscriptions in the cyber cafés at Panauti were of at most 512 kilobits per second (kbps) and were shared among eight-to-12 customers simultaneously. Meanwhile, even the richest quintile of the population cannot afford the basic asynchronous digital subscriber line (ADSL) service, Regmi and Chautari found.

The project began by providing 148 computer labs to 148 public schools in rural Nepal, starting four-to-five years ago. Each lab features 20 computers, two servers, and two uninterruptible power supplies. The connectivity for those schools was so spotty that it spawned a second initiative to enhance rural connectivity, started in June 2017 with the support of a Microsoft grant. They currently serve 20 schools with connectivity in Dhading district, three-to-four hours from the capital city of Kathmandu. These schools are connected using hybrid technology, which consists of a combination of fiber optics, line-of-sight, and/or TV white space (TVWS) technologies depending on the geographic conditions in the area. Line-of-sight connectivity is cheap because the modems are only roughly US$ 120 each, but difficult in most cases because it depends on clear terrain. TVWS is more expensive, costing between US$ 6,000 and US$ 9,000 to set up and maintain. Initially, the project only used TVWS, but in cases where other modalities can serve more advantageously, they are being converted to less expensive options.

In order to assess connectivity options, Picosoft determines the Global Positioning System (GPS) location of the schools in order to see if there are line-of-sight capabilities or not. But this requires a lot of deskwork and follow-up, since often the information is not entirely accurate because there are other factors such as new buildings, or the forest grew taller, thus line-of-sight has been interrupted. Finally, the installation team goes to these sites to assess and install.

In addition to 20 schools, the project also serves 20 public Wi-Fi hotspots with connectivity. Those 20 sites include four parks (selected by the local government), 14 government offices, one municipality, and one public library.

Service is provided free-of-charge to the schools for one year, and then defaults to the government rate irrespective of school enrollments. For the government offices, the cost is US$ 30 per month for 2 megabits per second (Mbps) service. They are in the process of improving the backhaul bandwidth to provide faster service too.

The project currently serves a total of 16,800 students in grades 1-12 across the 20 schools. In addition, the project serves 14 government offices, which includes more than 200 government officers, and the many daily visitors to those offices who use connectivity services there. The project is in the process of developing user analytics about site popularity and other information, but statistics are not yet available.

The project is developing a number of awareness programs with the government offices related to e-governance including registration of vital information including birth, death, marriage, etc., as well as health issues, public hygiene, and environmental awareness.

The project offers three levels of information and communications technology (ICT) training, many of which are digital instructional videos. The levels include digital literacy and basic computer skills, digital citizenship and security, and how to use e-government services. They have developed an online learning portal to support this training initiative as well.

Picosoft also hasan in-person training component in which teachers are trained to become ICT educators, and staff travel around rural villages with a trunk of laptops in order to conduct instructional tutorials. Every week the project conducts a one-week intensive training for approximately 40-50 teachers who then become ICT educators.

Geographical barriers– As it is situated in the Himalayas, the terrain of Nepal is very mountainous, which makes it difficult for trainers and users to get to the access sites. It also presents technological challenges to providing Internet connectivity. Volatile weather can knock antennas out of place and disrupt service as well.

Transportation costs – Due to the terrain and the lack of infrastructure, it is difficult to get the necessary equipment to the relevant locations. If something is missing or needs to be adjusted on site, it takes a very long time to get additional materials to the location.

Scaling up – Growing the project is very capital intensive, and funding is difficult to secure. The project is only partially monetized, which makes it possible to sustain at current levels, but still leaves open the question of how to grow.

Scaling up is necessary to keep costs low – The project needs to scale sufficiently to grow to a larger network in order to keep user costs low and project budgets sufficient.