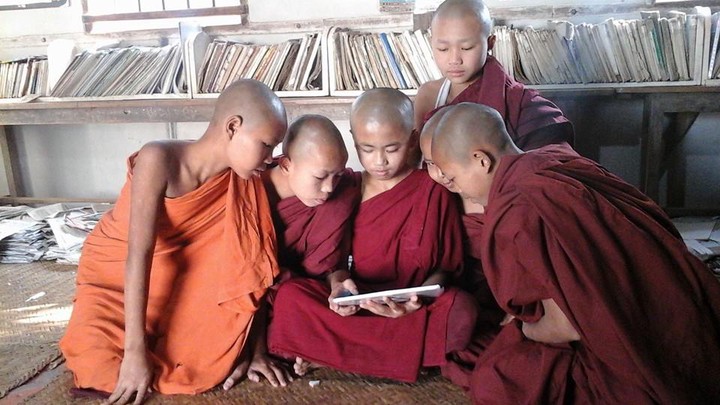 The Myanmar Book Aid and Preservation Foundation (MBAPF) is a nonprofit organization that was established in 2008 following the high death toll and widespread destruction of Cyclone Nargis. To rebuild communities, the foundation focused its efforts on modernizing underserved populations through the introduction of information and communications technologies (ICTs) in libraries around the country. Through partnerships with global charities, individual donors, nongovernmental organizations (NGOs), and United States-based universities, MBAPF provides Internet access, devices, software, and locally tailored training through a number of different projects that target different segments of Myanmar’s population.

Most Internet users are located in Myanmar’s two biggest cities, Yangon and Mandalay, where the penetration is highest. The rate of smartphone use is almost 80 percent in 2017. The main medium for Internet access is still mobile phones, but laptop use is on the rise. Internet speeds, however, are very slow, especially in rural areas. Despite the fast rate of mobile phone penetration, digital literacy and awareness in Myanmar is quite low, and even nonexistent in some rural areas.

Libraries are key institutions that promote digital literacy. In Myanmar, there are 55,755 registered public libraries, but only 4,868 are considered active. Moreover, many of the libraries are located in rural areas, according to the Asia Foundation. There is also a system of mobile libraries in Myanmar. Besides the basic services offered, visitors can also access the Internet if they go to large, urban libraries. The quality of libraries, however, varies. The availability of new books and materials, basic infrastructure (e.g., electricity, bathrooms, etc.), among others, are different from one library to another and often disadvantage those in rural areas.

In collaboration with Beyond Access, a consortium of 11 organizations, MBAPF aims to modernize public libraries of Myanmar since 2013 through several programs. The first project, Beyond Access Myanmar, was launched in November 2014 with the support of Ooredoo Myanmar and the Ministry of Information. Ninety libraries were provided with Internet access, and 150 libraries were provided with tablets and laptops. In addition, training on new library services, ICTs for librarians, and library leadership programs have been conducted since 2014.

The second project, Mobile Information Literacy (MIL), was developed in collaboration with TASCHA and the University of Washington in 2015. Development consisted of adapting the university’s own Digital Information Literacy curriculum to the local needs of Myanmar, where more than 80 percent of Internet users access the Internet via smartphone. Initially, the project aimed only at training librarians in digital literacy and ICT skills, and although MBF continues to be library-based, it has expanded training programs as demand grows. Now, it offers its curriculum to librarians, civil servants, civil society groups, research firms, and students. The training program is being monitored and evaluated by United Nations University (UNU). The supporters of this project also include the Bill and Melinda Gates Foundation, Microsoft, Tableau, the United States Agency for International Development (USAID), and the Asia Foundation.

The third project known as Tech Age Girls Myanmar aims to close the gender gap in digital literacy in Myanmar by providing ICT and soft skills for girls between the ages of 16 and 20. In 2016, the foundation selected 20 libraries that each hosted a cohort of five girls to receive training. Their training includes not only competence in ICTs, but also training in leadership skills and project management. This program culminates with a meeting between these girls and female leaders of Myanmar ­– politicians, executives, entrepreneurs, etc. – and with the girls developing their own local community projects. The first group of 100 girls finished the nine-month program in 2017, and will begin to serve as trainers in their local libraries.

The MIL program partnered with UNU researchers to develop methods to monitor and evaluate the impact of the program. The program currently uses two different impact assessment methods. The first is short-term and survey-based that measures participants’ skill-levels pre- and post-implementation. Through this survey assessment, the program saw it was able to improve skills by 15 to 30 percent. The second assessment method is long-term and psychologically focused. It aims to analyze how behaviors, mind-sets, and lifestyles are changed by the introduction of ICTs in these communities. Evidence gathering and monitoring are ongoing for this phase.

In additional post-deployment surveys, MIL rates the success of its programs on individual libraries. Out of the 90 libraries in which they initially deployed MIL, 30 are what the organization calls “gold standard” libraries. This means that they have not only responded well to deployment and training, but they have also successfully integrated ICTs into their community and are seeking or implementing sustainable, community-based solutions for their continuance.

Lack of Funding – Expansion is limited to the availability of funds. Proceeding on a project-by-project basis, MBF trains library staff and community participants as funds allow. This means that the administration’s attentions are largely consumed by constant funding searches. It also means that they are not able to hire permanent training staff.

Lack of consistent electricity – Power supply can be erratic in certain regions. The emphasis on mobile informational literacy mitigates in part the reliance on a continuous power supply.

Engaging communities to sustain projects is necessary – Start-up funds and grants are necessary for launching a countrywide ICT project. These start-up funds serve to introduce communities to the value of an unfamiliar resource: initial equipment costs, access, and training provide first-hand testimony of the value ICTs bring to a community. After these funds are efficaciously exhausted, it is important that the community itself takes charge and develops a sustainable model to continue and expand local ICT access.

Addressing ICT gender gaps is important– In Myanmar, the availability of ICT access is often limited to spaces that are socio-culturally off-limits to women, such as cyber cafés and teashops. A key aspect of MBF’s strategy to close the ICT gender gap is their focus on the library as a public, mixed-gendered community space. Projects looking to address ICT gender gaps mal benefit from taking into account the cultural specificity of the discrepancy in order to strategize its remedy.