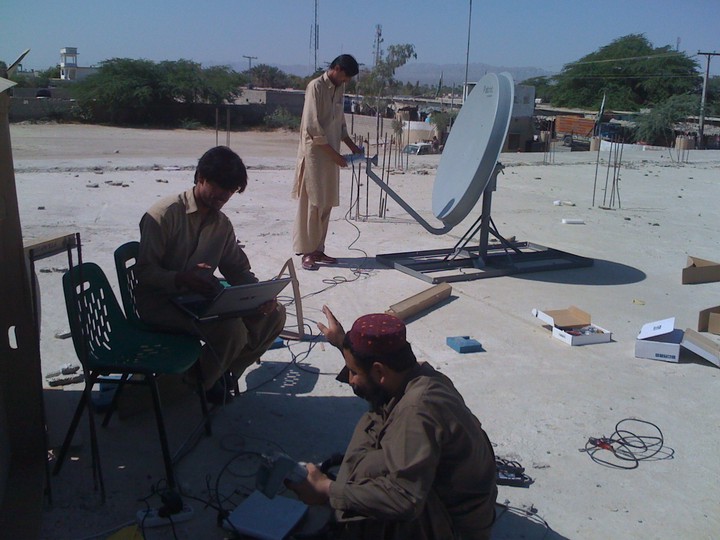 The Internet Policy Observatory Pakistan (IPOP) is a think tank founded in 2014 and based in Balochistan, Pakistan. It aims to foster countrywide Internet connectivity with a focus on rural areas. IPOP deploys 36 of what the organization refers to as “Internet houses.” These are rooms, often in local administration offices, which provide communities with fiber and satellite Internet connectivity using donated hardware that IPOP refurbishes. The Internet houses are staffed by volunteers who also conduct digital literacy trainings. IPOP is an example of an effective grassroots connectivity initiative, which has faced considerable challenges from funding and governmental impediments.

Balochistan, Pakistan, is the largest of Pakistan’s four provinces and forms the southwest region of the country. According to a Pakistani government census, Balochistan is split into about 76 percent and about 24 percent. The geography of the province is diverse with beaches to the west, mountains to the north, and the remainder is plains, highlands, and desert. The geography and rural environment along with major security issues has resulted in unstable and relatively expensive Internet and mobile services. According to Pak Voices, a nonprofit project by Bytes for All Pakistan supported by Free Press Unlimited, 3G and 4G mobile services are available. Coverage is poor, however, and services are occasionally suspended by the government for security concerns or technical issues related to the fiber optics causing widespread issues for individuals as well as companies.

Internet penetration in Pakistan is at 14 percent and is limited by a lack of resources, low literacy, electricity shortages, difficult economic conditions, and cultural resistance. In Balochistan specifically, lack of Internet access is primarily due to underdevelopment and ongoing political and social conflict. As for broadband, about 75 percent of tribal areas and 60 percent of Balochistan does not have fiber optic cables as of 2013, according to Tigah Journal. Internet costs are still relatively expensive for the majority of people, particularly those in remote areas, such as Balochistan.

The Internet Policy Observatory Pakistan (IPOP) is a think tank that conducts research on ICT policy and regulation in Pakistan and informs policy. IPOP also seeks to be a nexus point for researchers, activists, and institutions for collaborative policy work.

In an effort to close the digital divide in rural communities in Balochistan, Pakistan, IPOP provides hardware, trainings, and Internet connectivity in the form of Internet houses. Local telecommunications companies donate all of the hardware, and volunteer engineers refurbish it for use in the Internet houses. Because of the unreliability and unavailability of electricity, IPOP powers the stations with solar panels. When an Internet house is first constructed, there is a trainer on-site for a week. Afterward, a volunteer maintains the site and can contact IPOP as needed for technical support or resources for programming offered by the Internet house. In addition to providing off-site support, IPOP visits each facility quarterly to make sure the machines are secure and have up-to-date software.

Also, IPOP runs entry-level digital literacy trainings each quarter focusing on both on hardware and software. Everyone who completes the training is given an email address as well as outfitted with accounts on social messaging apps and social media. These trainings and use of the Internet houses are completely free to end users.

IPOP has successfully connected some of the underserviced population of Balochistan, Pakistan. They currently maintain 36 Internet houses, 12 fiber, 24 satellite, all with satellite backup, with 15 more in the pipeline. Over the last two years, IPOP has conducted 416 training sessions. Because they are co-located with governmental administrative offices, they offer some minimal e-governance support, such as connecting online to submit forms for identification cards. IPOP is also piloting Wi-Fi in two locations to help connect more women in the province, as travel to the Internet houses is not always safe. IPOP has also recruited female volunteers in some Internet houses to help bridge the gender gap in Internet access.

An Internet house enables education and employment opportunities. One young man from the region used to travel three hours each way to search for jobs and educational opportunities at the Internet house. He was able to apply and was accepted to a top university in the region. It also enables ecommerce activities. IPOP notes that women were able to market their handicrafts on Facebook, which has provided them with much needed revenue.

IPOP has also allied with other campaigns and initiatives for the betterment of the region and Pakistan as a whole. In addition, through IPOP’s Digital Security Capacity Building Initiative, the organization makes policy recommendations on cybersecurity, cybercrime, data protection, and e-governance.

Lack of sustained funding – There is no government support for the work IPOP is doing. In addition, they also met some resistance while attempting to install the Internet houses at local administrative offices. They also struggle with enticing international donors. IPOP is also unable to keep up with the demand for Internet houses because they do not have enough donated hardware.

Lack of skilled manpower – Balochistan lacks individuals with the skills to setup technology needed for connectivity.

Limited and irregular electricity access – Before IPOP was able to use solar panels to power the Internet houses, the organization was forced to rely on the electric grid that offered about two hours of electricity a day.

Lack of security – IPOP ensures the cybersecurity of their online houses with quarterly updates. Yet, real-world security concerns are also problematic, as there is political strife in the region. Some of the Internet houses are more than a day’s drive from IPOP, and the safety of personnel cannot always be guaranteed.

Digital divide solutions need to account for country specific conditions – One of the biggest strengths of IPOP is the flexibility with which is overcomes the challenges it faces in bringing connectivity to rural locations. This flexibility is necessary due to very specific cultural and geographic realities that IPOP faces. Because other countries may contend with dissimilar issues, the IPOP model may not be as effective in other locales. Thus, it is useful to identify an area’s specific features that can impede connectivity and then find ways to circumvent these hurdles.