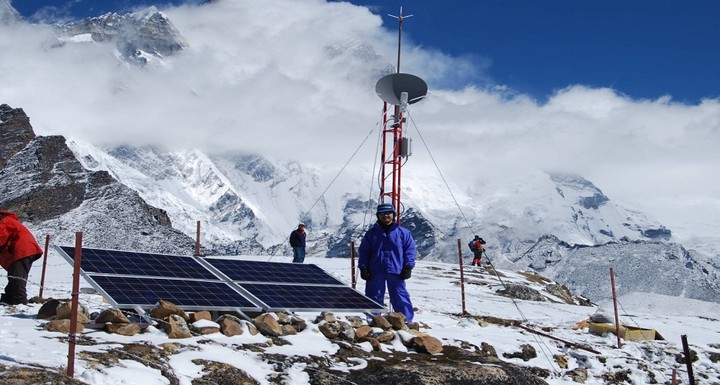 Nepal Wireless Networking Project is a social enterprise that provides connectivity to villages in Nepal through community Wi-Fi projects. Since 2001, it has connected over 200 rural hamlets in Nepal to the Internet. In late 2015, the team helped connect 12 villages in earthquake-affected areas. It is pioneering a ‘Smart Village’ to provide the various benefits of connectivity such as easy access to online education, government services, health services and smart trekking routes to communities. Nepal Wireless is also implementing pilot project for the deployment of a community-based hybrid wireless network using TV White Space and Wi-Fi spectrum in remote valleys around Manaslu Himalaya and Dhaulagiri Himalaya region in 2016.

Nepal is a landlocked country with over 70 percent of its population in rural and remote areas. The terrain in the country is highly mountainous, which creates multiple challenges in the deployment of telecommunications infrastructure in many parts of the country. The country has relatively low mobile broadband penetration, at 25 percent for a population of over 28.5 million people. In addition, as of 2016, there is only a 1.2 percent penetration rate for fixed broadband subscriptions. The country is also one of the poorest countries of the world, with income per capita at a mere US$ 730.

Although Nepal is one of the poorest countries in the world, internet has become widely available across the country as a result of the many cyber cafes and public internet access spots (approximately 1100) located around the country. Additionally, there are over 40 internet service providers, with the most popular being Nepal Telecom, United Telecom, and Ncell. The minimum monthly internet cost, offered by Nepal telecom, is US$ 8.70.

Nepal Wireless started as an effort to bring a telephone line and an Internet connection to the Himachal Higher Secondary School in the Mygadi district of Nepal in 1996. After overcoming an environment of political strife, stringent government regulations, as well as technical challenges and financial constraints, the first project was completed in 2002. The project’s locations – mostly rural and isolated areas – are often inhabited by indigenous subsistence farmers. There are marginalized or socially disadvantaged groups living in these isolated villages of the Himalayan regions of Nepal.

By 2008, Internet connections had been provided to community centers, schools and clinics in 42 villages, with plans to expand to at least 19 more. In 2016, over 200 such villages have been connected to the Internet and had access to a whole host of services including telemedicine, online education, and online banking services.

The Nepal Wireless Project uses 2.4 GHz and 5.8 GHz frequencies to connect the villages, relay stations and base stations. Most of the network backbone is connected using Motorola Canopy radios at 5.8 GHz due to high reliability and to avoid signal interference. Last-mile connectivity uses wireless Ethernet (802.11b/g standard) radios at 2.4 GHz, which is cheaper and compatible across various manufacturers. In Mygadi, for instance, the system has two relay stations to forward the wireless signal to a base station and Linux server facility in Pokhara, the nearest city with Internet access, with a connection to a hospital in the city. Users at the school use Internet on desktop computers and laptops.

The Internet connectivity is used to provide teaching and telemedicine services to the villagers. While dependent on the distance of a village from the relay and base stations, most connections provide a minimum bandwidth of 1 MBp/s in the local network, which allows for video conferencing facilities. At the telemedicine clinics, doctors use a network camera that can be controlled remotely.

The project charges a service fee to rural communication centers to ensure sustainability and cover the operating and maintenance costs of the network. The management structure allows community organizations to make their own decisions to run their communication centers and the system is deployed with active participation from local governments and youth from the communities.

The Nepal Wireless Networking project has connected 200 hamlets in remote, rural and mountainous areas in Nepal. The populations in each of these villages vary from a few hundreds to a few thousands. This connectivity provides villagers with vital information for trading their produce in local markets. Many villages now provide online booking in trekking areas for tourists. Nepal Wireless has established a mechanism for online money transfers through different local agencies in rural areas, which benefits tourists and mountaineers.

Nepal Wireless has also partnered with several international organizations and has established weather stations for real time weather monitoring to assess the impacts of climate change over a long period.

Challenging terrain — Some rural communities do not have access even to a cellular signal, and Internet provisioning for rural areas is economically cost intensive for traditional telecommunications service providers.

Limited and irregular electricity access — Because of their isolation, some of the villages do not have access to an electricity grid. Instead, the relay stations use alternative sources such as solar and hydroelectric energy.

Lack of availability of equipment– Equipment for deploying community infrastructure in rural areas of Nepal is often sourced from outside the country, owing to a low manufacturing base for such components within the country. This causes delays, and increases costs of deployment.

Leveraging community partnerships aids sustainability – Strong community support is essential to sustainable connectivity, as well the provisioning of other types of community services such as telemedicine and school networks.