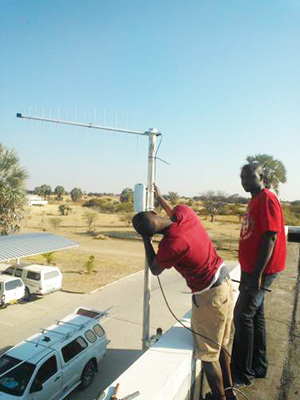 My Digital Bridge Foundation launched a pilot project to test TV white space spectrum use viability in Namibia in 2014. Known as Citizen Connect, the project aimed to provide broadband to rural settlements via unused frequencies in the ultra high frequency (UHF) terrestrial television broadcasting bands. The pilot was launched in the northern region of Namibia. The project has faced funding and regulatory challenges in initiating a countrywide rollout but succeeded in connecting 27 schools and seven Ministry of Education offices.

Namibia is a sparsely populated sub-Saharan African country with less than 2.5 million inhabitants spread over 824,292 kilometers. Namibia has one of the highest income inequality rates in the world, in part due to the separation between urban and rural economies.

As of 2013, only 16 percent of households had Internet access at home, which translates to slightly more than 40,000 asynchronous digital subscriber line (ADSL) connections countrywide. This connectivity is centered in urban areas; neither broadband nor mobile networks serve vast portions in rural areas. Where available, broadband is unaffordable to approximately 40 percent of Namibians. Comparing figures between 2013 and 2014, this financial inaccessibility explains why Internet penetration in the country seems to be plateauing. In a comparison between Namibia and other South African Development Community (SADC) nations’ Internet penetration, Namibia ranks 10^th^, trailing countries with half its per capita income.

In 2014, My Digital Bridge Foundation launched a pilot program called Citizen Connect that uses TVWS to offer connectivity to rural schools in three northern Namibian regional councils – Oshana, Ohangwena, and Omusati. The project is supported by partnerships with Microsoft (under its 4Afrika Initiative) and Adaptrum, as well as the Millennium Challenge Corporation (MCC) and Millennium Challenge Account (MCA)-Namibia. When it commenced, it was the largest TVWS project its time in terms of area coverage.

The project employed TVWS supported by traditional 5 gigahertz (GHz) equipment and solar-powered base stations to offer connectivity to rural schools. Originally, the project intended to include 23 rural schools and 10 of the educational offices that administer the schools. Engagement with beneficiaries was part of a diffusion strategy adopted to insure project success. This included consulting with the beneficiaries, developing technological infrastructure, and training community members, such as teachers, in maintaining this infrastructure.

The Namibian TVWS pilot project was successful in orchestrating broadband to four more schools than expected, reaching 27 in all. They fell slightly short of the targeted 10 administration offices, however, only providing connectivity to seven. While the technology remains in place to continue TVWS in the northern region, the government has disallowed Citizen Connect to remain operational.

Though the technology is falling into disrepair from lack of use, My Digital Bridge was able to implement the technological infrastructure for future TVWS projects in northern Namibia. In addition, the Citizen Connect project showed the viability of using this method to connect rural regions to the Internet as well as its ability to be powered by solar energy. Finally, while the project was functional, it helped increase information and communications technology (ICT) literacy within targeted communities.

Coordination challenges – Governmental indifference can make physical deployment of necessary technologies difficult. For instance, if a connection point needs to be situated in public spaces, it is much harder to make this a reality without intervention from a government official. This proved to be a continued challenge for the project. In addition, the multiple actors involved also struggled with working in a concerted way.

Lack of sustained funding. – While the pilot program was successful and there were hopes that it would be scaled nationwide, both the means of funding and implementing the project on a larger scale were not discussed early enough in the project.

TVWS helps to connect challenging terrains – The project team notes that TVWS can help rural areas with no broadband Internet connectivity and can be easily deployed. It is not disrupted by landscape features (e.g., valleys) nor fabricated structures because of its reliance on non-line-of-sight (NLOS) technology.

Soliciting government support is important – Outright governmental hostility can completely impede or stop a project. Governmental indifference is likewise problematic. Their experience suggests how it is important to increase the friendliness of both government and regulatory bodies as much as possible to ensure a project’s success.

Local ICT literacy helps with adoption – Projects such as Citizen Connect expand ICT literacy in regions that have little to no connectivity. Additionally, and due to the need for local maintainers of the infrastructure, technical knowledge is diffused into the region. In turn, these individuals can help further propagate and augment the system through the frame of their indigeneity.

Sustainable business models are necessary – As is the case with many networks that are or have the potential to be free, projects of this sort may benefit from contending with the general skittishness around the term “free.” Even though the Namibian TVWS project offered the government a model that would allow them to completely subsidize the cost of providing Internet to rural schools (via ad revenue), government officials were distrustful and uncomprehending of how this could be possible. Similarly, while it is imperative that connectivity is affordable, offering it at a small cost bestows value on the service in the eyes of its beneficiaries (i.e. because “nothing free can have value”).