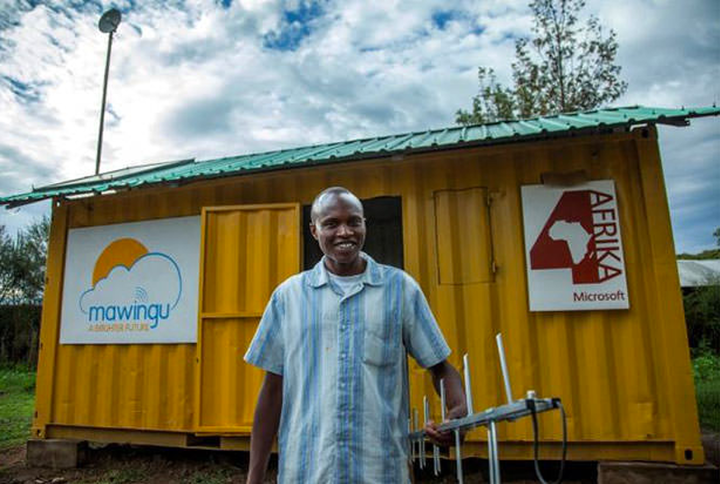 The Mawingu project is a joint undertaking by Mawingu Networks, Microsoft, and Jamii Telecommunications that provides affordable access to wireless broadband Internet as well as device recharge facilities in the rural Kenyan counties of Laikipia, Nyeri, Embu, and Meru. Launched in 2013, more than 10,000 customers access its services through 300 Wi-Fi hotspots at less than $3 per month, with others in these districts – a total population of about 300,000 people – receiving free access through libraries, schools, and health centers. The project relies on a combination of unlicensed spectrum and TV white space (TVWS) spectrum to provide last mile connectivity as well as backhaul.

With an Internet penetration rate of nearly 70%, Kenya has among the highest rates of Internet use in Sub-Saharan Africa. Kenya’s Internet usage rates rank among the highest in Africa with nearly 87.2 percent of the population having Internet access and 18.6 percent subscribed to broadband. In August 2013, Microsoft sought permission from the Communications Authority of Kenya to test the viability of TV white space technology to bring last mile connectivity to Kenya’s rural areas. The Mawingu project conducted these trials in the rural counties of Nyeri and Laipika by Jamii Telecommunications Limited, Adaptrum, and Ubiquiti Networks, along with support from the United States Agency for International Development (USAID) and OPIC. The trials entailed setting up solar-powered Internet kiosks or solar cafés to provide Internet access to locations with limited or no access to electricity.

The Mawingu network uses photovoltaic solar power and TV white spaces as well as other license-exempt radio technologies to deliver commercial Internet access through Wi-Fi hotspots in villages as well as transport interchanges. Mawingu, meaning “cloud” in Swahili, connects rural communities where barriers to Internet use are significant, both because of the lack of infrastructure and the lack of affordability. Mawingu targets low-income earners by providing access at the cost of $1 per week and $3 per month.

A noncommercial arm of the business provides Internet access to primary healthcare centers, schools, and other public services through partnerships with local organizations such as the Kenyan Red Cross and Nanyuki library. It is also connecting 20 schools near the Ol Pejeta conservancy.

Jamii Telecommunications Limited provides the backbone link that transmits Mawingu’s traffic to the Internet using a fiber-optic network that belongs to the Kenyan Power and Lighting Company. Additionally, 5 GHz wireless links connect to form rings and distribute connectivity from the backbone to end points. TVWS technologies provide links in areas that conventional 5 GHz links cannot serve due to terrain, and are used for both completing the ring structure and providing last mile connectivity. TVWS can penetrate rough terrain and reach up to 8 kilometers. They cover 16 times the area of traditional Wi-Fi, and nearly four times the distance.

Since beginning in 2013, Mawingu has extended Internet to locations around Mount Kenya, including rural areas (predominately) and urban, dense, and busy sites. The business operates in the counties of Laikipia, Nyeri, Embu and Meru, which have a combined population of nearly three million and a service penetration potential of about two million. Mawingu’s business model has focused on targeting low-income earners who are unable to afford mainstream services (or travel time/costs to access distant hotspots) or whose areas lack wireless coverage. The company’s solar-powered network stations have allowed them to charge customers low costs of $0.50 per day, $1 per week, $3 per month or $10 for three months. Mawingu has expanded through its addition of local agents who sell Internet goods and services in target communities. Within 12 months of Mawingu’s implementation, users reported improvements in farming and other trades activities resulting from online research on cost-saving or quality-enhancing products and methods. Users have also been able to more easily access government services, like failing tax returns. By 2018, Mawingu had set up around 1,500 hotspots in and around Nanyuki, with approximately 11,000 active users benefiting from service. Mawingu’s success has been enabled by partnerships with organizations like Microsoft, USAID, Vulcan Inc., and Overseas Private Investment Corporation. Its early success is also partly attributable to baseline surveys of target markets, which accessed smart phone ownership, SMS usage, income, number of dependents, amount spent on mobile data, usage of Internet café before introduction of Internet into communities, gender breakdown of users, and data bundle preferences, among other information, that informed service design and delivery (especially affordable pricing). Kenya’s government is aiming to significantly increase Internet penetration within the next decade, and Mawingu is poising itself to be a big contributor to that goal (particularly via participation in the Extend Internet Participation initiative).

Lack of consistent basic electricity provisioning – Access to reliable electricity from the grid is difficult, as a number of these communities lie in rural and off-grid areas.

Regulation – Mawingu learned that it is better to run a trust or co-operative, with funding from commercial investors and impact investors, in order to develop the infrastructure to support a larger consumer base (in the millions). This will take 10-15 years to develop, but had the company been aware of it could have begun earlier. However, in Kenya, it is illegal for a trust or co-op to run a telecommunications network. Mawingu thus has to make trade-offs in how it makes money for infrastructure, licenses, back-haul, etc. in order to be within regulatory bounds while having enough to support its growth goals.

Investment & Returns – In Kenya’s environment, having a trust with funding from a blend of traditional (commercial) investors interested in return on shares and impact investors interested in social returns (not just the monetary) is economical for building infrastructure, purchasing licenses and other goods, and engaging in other profit-generating activities with less regulatory constraints.