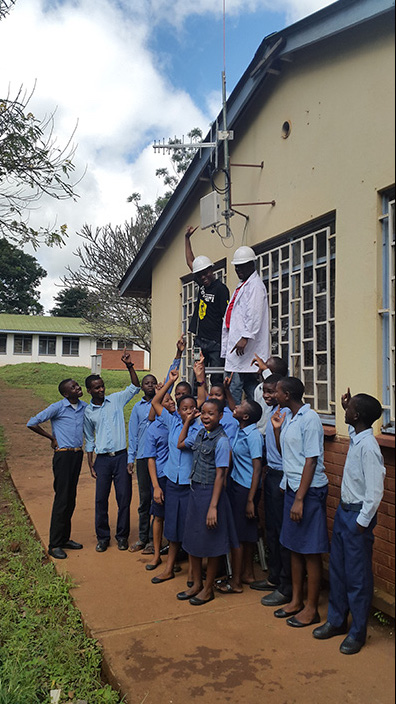 The University of Malawi, in partnership with the Malawi Communications Regulatory Authority (MACRA) and the International Centre for Theoretical Physics launched a TV white spaces pilot in the university town of Zomba in southern Malawi in 2013. The project has connected different institutions until now, including a school, a hospital, an airport and a research facility. In 2015, the project expanded to connect a secondary school at Mulanje where students can now connect to the Internet via their computer lab.

Malawi, a landlocked country with high prevalence of poverty, has very low access to the Internet. As of 2014, Internet penetration stood at 6 percent, with fixed broadband subscriptions reaching only 0.05 percent of the population in the country. The country’s ICT backbone has not been regionally integrated, and due to its landlocked nature, its connection to international fiber runs through Mozambique, Zambia, South Africa, and Tanzania through the SEACOM and EASSy networks.

The Malawi TVWS project has a single base station and three client stations arranged in a star topology. It has connected a school, a hospital, an airport and a research facility. The 2013 pilot was a partnership between the Malawi Communications Regulatory Authority, International Center for Theoretical Physics, and the physics department of the Chancellor College at the University of Malawi. The network included four sites, and set the record for the longest operational TV White Spaces link, with two of those sites being 20 kilometers apart. Low cost hardware components as well as software for scanning the spectrum and for transmitting signals are now being developed at the computer lab in the University of Malawi. Unused TV white spaces are less costly than Wi-Fi in rural areas, as for the same amount of power, a TV white space signal can cover a wider area than a high frequency Wi-Fi signal, which reduces the number of base stations and antennas needed to set up the network.

The Mulanje Secondary School, connected in 2015, has a new computer lab that enables students to access the Internet to do homework and learn from online resources.

The project has already benefited several stakeholders in Malawi. Researchers at the Pirimiti Community Hospital are now able to upload real-time X-ray images and access online resources. Remote specialists are now able to use the link to advise local staff based on this data, improving patient outcomes. Further, geological data in real time is being transmitted to seismologists through the link, which has improved Malawi’s disaster response. Students at the local school can now stream educational videos and use services such as Skype for communication. The success of these stories has led to consultations on regulations of TV White Spaces.

Lack of affordable access – In Malawi, mobile broadband costs more than US$ 14 per 4 GB of data per month, which makes Internet access out of the reach of most Malawians, as it is nearly 50 percent of the average per capita income, much higher than the 5 percent benchmark set by the ITU.

Limited and irregular electricity access – Less than 9 percent of the country has access to electricity, with the grid concentrated in urban centers and only reaching a mere 1 percent of rural households.

Successful TVWS deployments by leveraging the right partnerships can lead to policy and regulatory attention -- Using TV White Spaces shows promise as a low-cost alternative to provide the benefits of connectivity in areas where a fiber backbone is too expensive to deploy. The Malawi telecommunications regulator took note of the trial, and proceeded to create a regulatory framework for TVWS use in the country.