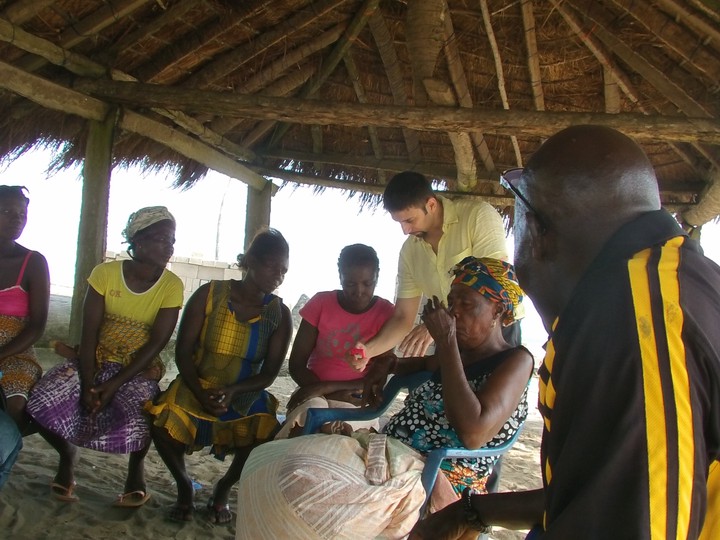 Women at a session for DocmeUp. Photo credit: DocmeUp Project

Since 2013, the DocmeUP project has implemented pilot programs to offer better prenatal healthcare to pregnant women in rural Ghana. Their first project involved providing mobile ultrasound scans that reached nearly 400 Ghanian women. Their current project, launched in June 2017, also focuses on prenatal care. This time, however, instead of ultrasounds, DocmeUP is providing glucometers to test for diabetes in pregnant women. DocmeUP is an example of a public health intervention impeded by lack of funds and an overzealous bureaucracy.

Despite those benefits, the maternal mortality rate (MMR) in Ghana in 2015 was 319 per 100,000 live births, much higher than the world’s average of 216 according to the World Bank. Poor quality of ANC is suggested as the major contributing factor for this issue. Moreover, hemorrhaging is the largest single cause of maternal death in Ghana, leading to almost 24 percent of deaths.

Research suggests that most Ghanaian women are not receiving the full benefits of ANC. Although most women visited a health facility at least once during pregnancy, not all of them visited four times or more as recommended by the World Health Organization (WHO), and only a fourth received all nine ANC services across all visits. Little is known about whether they are informed of, have access to, and utilize the available prenatal care applications.

DocmeUP pilot project was initiated by a group of academics at ETH Zurich, African Institute for Mathematical Sciences, and Instituto Italiano di Technologia with the aim of increasing number of ANC visits, reducing home deliveries, and supplementing care given by ANC clinics through low-cost mobile phones and portable ultrasound scan machines. The pilot project aimed to address the problem that most pregnant women in rural communities in low-income countries do not fulfill the minimum recommended visits by The World Health Organization and deliver without skilled attendants.

Between April 2014 and February 2015, DocmeUP ran its pilot program in the Central Region of Ghana. The communities were chosen among those between the city of Cape Coast and Accra to facilitate the trips of the ultrasound technicians. Each community was located to a clinic at varying distances, ranging from none to 5 or 10 km. In addition, while some were well connected to major cities, some were isolated.

It deployed remote ultrasound technology and an online managing system for the ultrasound and patient data, to rural communities. Two ultrasound technicians from a local teaching hospital were trained over a two-month period. In addition, the pilot included five community health workers (CHW) – a trusted woman in each served community – who acted as a liaison between the pregnant women and the medical professionals at the remote site. The CHWs were given low-cost, general packet radio service (GPRS)-enabled mobile phones (Nokia ASHA 206). As they were in direct contact with the women, their responsibilities were extensive. Some of these duties included making community members aware of the deployment, explaining the utility of this prenatal care and the importance of hospital birth delivery, registering pregnant women and sending information via the mobile application to a centralized online location. CHWs were also expected to check on the women every two weeks and track whether or not they were keeping to the agreed upon prenatal schedule.

The online management system used by the program was divided into server and client sides. The server side gave access to aggregated and individual data and could collate reports. The client side was based on an application called DocmeUP, which had two main modules: “Register a Pregnancy” and “Visit and Case.” The former is self-explanatory; the second module allowed CHWs to report health concerns faced by the women, and gave three possible solutions – “recommend counseling,” “requires assistance within 24 hours,” or “requires emergency referral immediately.” Ultrasounds from women in the program were transmitted to gynecologists for analysis and immediate feedback.

In the first pilot, CHWs registered and followed 323 pregnancies. They used the client side of the DocmeUP module to inquire about danger signs 339 times. Ultrasound exams were conducted on 122 women, including 60 who gave birth during the project. In some cases, these ultrasounds were able to make the women/healthcare providers aware of issues such as ectopic pregnancies and breech-births. Also, following the instructions of the mobile phone app, some women were encouraged to take Hepatitis B tests. Three of these tests were positive.

Overall, data from the pilot shows that the deployment lessened the signs of dangerous pregnancy to levels lower than before the implementation. Furthermore, there was a statistically significant increase in the number of women taking advantage of prenatal care and the number of hospital deliveries. DocmeUP had a successful pilot, but was unable to receive enough governmental and funding interest to initiate a countrywide rollout. Their current pilot, which replaces ultrasound technology with glucometers, is expected to have more support due to the significantly lower cost of a national rollout.

Social norms – Some of the women in the community where the pilot was deployed refused to enroll in the program due to pressure from their husbands or the local traditional herbalist.

Community resistance – Receiving ethical approval from the requisite bodies to run the pilot project in Ghana was complex. Similar projects should expect as long as a year to go through necessary paperwork and get permissions from the officials to initiate such a project.

Lack of transportation infrastructure – Many women live a far from a location where they could receive suitable prenatal care. In addition, because many family members rely on their income, travelling far distances for care is unrealistic because they simply cannot afford to miss a day of work.

Lack of sustained funding – The pilot could only include a relatively small number of participants due to the general lack of funding for the deployment. In addition, the only institutional support DocmeUP has received has come from universities. No other bodies have been willing to contribute to expand the size of the pilot, apart from support and a monetary prize from the African Network Information Center (AFRINIC) and the African Internet community. The cost of the ultrasound project is quite high, which is why DocmeUP’s second initiative switched to glucometers.

Engagement with community members helps build trust – When DocmeUP was interested in launching its first pilot, they met with local community leaders to receive their blessing, which encouraged women to take part in the program. By training trusted, local women as CHWs, the project was able to dispel some of its outsider quality. Moreover, because these women worked on a voluntary, no-pay basis (their duties were seen as contribution to their own community), a nationwide rollout may not be very costly.

Sustained funding source required for long-term viability – DocmeUP’s experience indicates that without the support of the government, any type of wide-scale implementation of this project is difficult. Similarly, without a considerable funder, launching larger pilots is also a challenge.