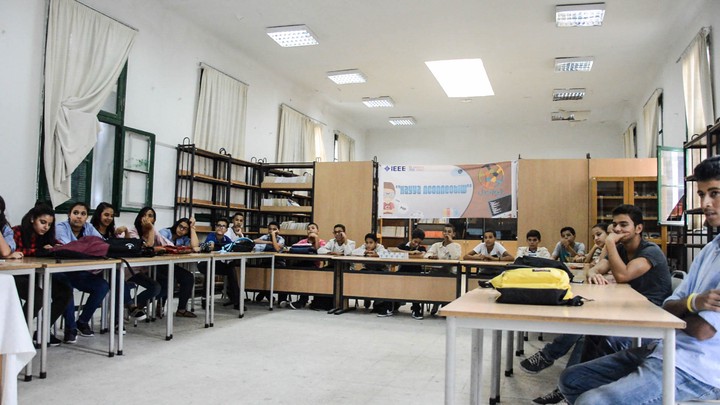 Project Tawasol is a project in Tunisia that’s led by IEEE Sight, Tunisia chapter and People Centered Internet. The project connects primary schools across the country to the Internet, and train students to use the Internet through ICT skills workshops conducted by IEEE SIGHT members. The project aims to create an Internet-aware next generation by sensitizing youth to critical skills. The project launched in 2016, and connected a primary school in Tunis – Sadiki school – in 2017.

Internet penetration in Tunisia stood at 46 percent in 2014, according to the International Telecommunications Union. A predominant majority of the population accesses the Internet through mobile broadband subscriptions, with more than 4.5 million subscriptions to 3G mobile data plans which far exceeds the number of fixed broadband subscribers, around 500,000 in number.

In the government’s official 2002-2007 policy, Reconstruction of the Tunisian Educational System, ICTs are emphasized as necessary. The Educational Act states that the Ministry of Education and Training and the Ministry of Higher Education should implement policies related to education, including those that pertain directly to the use and proliferation of ICTs for varied purposes. The policy emphasizes the importance of ICT to equip schools, introduce ICT as a subject and prove teacher training. As a step towards these goals, a virtual university and education system was initiated in Tunisia in 2002, without much success in the decade that followed.

As of 2016, 48% of the schools in Tunisia have access to an Internet connection. However, not all of these schools are equipped with labs that can train these children with ICT skills, and connections are more often than not provided to the administrative staff for coordination purposes.

Project Tawasol seeks to provide students small Raspberry Pi operated devices with hard disks that can be updated periodically with relevant content such as Wikipedia pages, TED Talks and other educational content from the Internet. The devices have been developed by IEEE Sight in Tunisia with aid from the San Francisco chapter. They are capable of automatically updating content when connected to Wi-Fi or 3G networks.

Tawasol invests in youth, technology and STEM education to empower problem solving and connections between students. They aspire to connect people by the provision of adequate infrastructure and constructing an education and social change process that fosters interaction between communities.

In December 2016, the Sadiki school in Tunis was identified as the first “Connected School” for the dissemination of these devices coupled with digital literacy training workshops by members of IEEE Sight. With support from the government, the project aims to connect 24 such schools – one school in each region within Tunisia. The project focuses on primary schools, with an aim to make the next generation aware of new technologies and information that can be accessed through the Internet.

As part of the project, technical talks and digital literacy as well as ICT training workshops are organized by IEEE Sight, Tunisia. These talks cover interactive sessions that teach students how to build their own websites using drag and drop interfaces. The first workshop conducted in 2016 had a 50% participation by women, a key step in enabling gender parity in Internet access and skills.

In digital literacy training workshops that have been conducted by IEEE Sight, students have built their own prototype websites such as a school blog using HTML, CSS and modular website building interfaces. The reactions in post-workshop surveys conducted thus far have been tremendously positive. “Most students asked us when we will return to provide them with their own devices for development,” says Skander Mansouri, one of the IEEE Sight members that conducted these training workshops.

The project has goals to impact rural schools in every part of Tunisia through the provisioning of low-cost Wi-Fi enabled Raspberry Pi operated devices, and has already impacted close nearly a 1000 students overall.

Lack of access to devices – Most schools in Tunisia do not have computer labs that have Internet enabled devices, which forms the first barrier to students that are trying to use the Internet. With low rates of home broadband connectivity in rural areas, schools and community anchor institutions are crucial points of contact for connecting to the Internet.

Lack of skilled manpower – ICT training is introduced at the higher secondary level, at the age of sixteen. Most students are unable to harness the resources Internet offers to them prior to that. Training of teachers in the latest technology as well as updation of skills is very poor, which is another challenge to digital literacy education.

Lack of Internet access: Rural areas suffer most from the lack of Internet connectivity. While coastal areas have relatively high rates of home broadband subscribers, schools still lag behind. Most homes still depend on copper, and while fiber connectivity is available to large enterprise, it is still out of reach for most households. In rural areas, wireless connectivity is restricted to 2G networks, whose coverage is very poor in remote areas in the interior regions of Tunisia.

ICT Skills training is a crucial component of connectivity projects targeted at youth and needs to incorporate real-world relevance – This training is more successful when conducted in an interactive setting and aimed at achieving an output (such as a website).