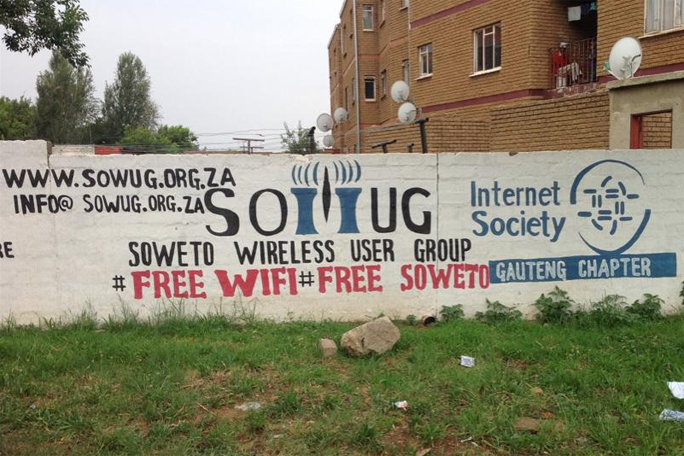 Soweto Wireless User Group (SOWUG), is a nonprofit organization based in Johannesburg, South Africa. The organization seeks to erode the digital divide in Africa. They provide include digital literacy training and deploy wireless hotspots. As of 2017, more than 1,000 people, including 50 youth and 10 businesses, have received digital literacy training. The SOWUG has also deployed upwards of 20 free, public hotspots. SOWUG is an example of a solution for accessibility and ICT familiarity in underserviced communities that is constrained by funding.

Soweto, originally a collection of settlements on Johannesburg’s outskirts, is now a township with a population of almost 1.3 million. Internet access in the province is uneven. While the province is home to 80 percent of South Africa’s 2,100 Wi-Fi hotspots, these are located within Johannesburg and not in Soweto, even though it is one of the most densely populated areas in the whole country.

A majority of households use mobile devices to connect to the Internet. With an eye toward developing better broadband infrastructure, the government’s “South Africa Connect” project has set two target goals: 90 percent of the South African population should receive Internet at 5 megabits per second (Mbps) and 50 percent of the country’s population should connect at average speeds of almost 100 Mbps. The Municipality of Johannesburg has plans to install 1,000 Wi-Fi hotspots and is contemplating a 900-kilometer-wide network for households. This deployment will not necessarily aid those in rural areas, however.

Soweto Wireless User Group aims to increase access, digital literacy, and familiarity with information and communications technologies (ICTs) in the Soweto region of South Africa since 2010. Due to illiteracy within the constituency, they first offered digital literacy training within the community. Their first activity involved creating a two-month course via Internet modules that individuals could engage with at a public library. However, the SOWUG noticed that retention rates for the program were a problem, as many people dropped out.

In 2015, SOWUG obtained an office where it began offering grassroots trainings that have been extremely successful. They have trained more than 1,000 individuals and groups, including 10 businesses, 10 households, and 50 youth. In addition to digital literacy, SOWUG also focuses on deploying Wi-Fi hotspots in Soweto. Using a fiber-connected high-site tower, SOWUG uses point-to-point 5.8 gigahertz (GHz) radios for middle mile and deploys Wi-Fi in the last mile. For backhaul, Dark Fiber Africa paid the initial setup fee of 12,000 rand (US$ 858.90) and the monthly fee of 6,500 rand. In 2014, the Foundation for Internet Development provided backhaul support for a year. In addition, the Internet Society (ISOC) donated 100,000 rand (US$ 8100) that SOWUG has used for cybersecurity.

Maintenance of the network costs around 25,000 rand (US$ 2000) a month, and SOWUG estimates that 2 million rand (US$ 161920) more is necessary to extend the network. They have plans to rollout 100 Wi-Fi sites in Soweto and have entered into a partnership with the government of Johannesburg to implement this plan. Even with the high costs, SOWUG provides users with 500 megabytes (MB) of data per month for free for users willing to set up profiles.

SOWUG hotspots serve approximately 1,000 devices with 150 simultaneous daily connections. Many users use multiple devices to access Wi-Fi. Ninety-three percent of users have utilized the hotspots over computer, 52 percent have used the network on their mobile phones, and 25 percent of users have connected on tablets.

SOWUG has provided digital literacy training to more than 1,000 individuals, which includes 10 businesses, 10 households, and 50 youth community members. Users at the SOWUG office use the Internet for a variety of tasks, such as writing a résumé, job searching, email, research, taking webinars, and viewing talks by distinguished individuals.

Lack of access to devices ­– SOWUG’s endeavors are impeded by a lack of access to equipment. The radios that SOWUG relies on for their deployment are not available locally either since the nearest retailer is more than 60 km away.

High cost of deployment – In addition to the expensive licensing requirements, other costs also make network expansion difficult. The rents for the deployment locations, for instance, are constantly rising, and the Internet in the area is extremely expensive. Prices currently stand at approximately 150 rand for 1 gigabyte (GB). Finally, SOWUG is not available to use all the bandwidth that has been donated, as they cannot currently afford more access points. Further, due to the low penetration of relevant ICT and technical skills available locally, SOWUG is heavily reliant on outsourced labor.

Regulation – South African government regulations require SOWUG to obtain a “public license” for their network. This license costs 30,000 rand, and it must be regularly renewed.

Lack of digital skills – On the user side, digital literacy was so low that SOWUG needed to provide training before the hotspots would be useful.

Cultivating partnerships is useful – SOWUG has been masterful at connecting with corporate and nonprofit partners to fund their initiatives. This has provided them both with funding as well as materials and resources to enact their projects. Yet, funding remains an issue, which limits their ability to scale.