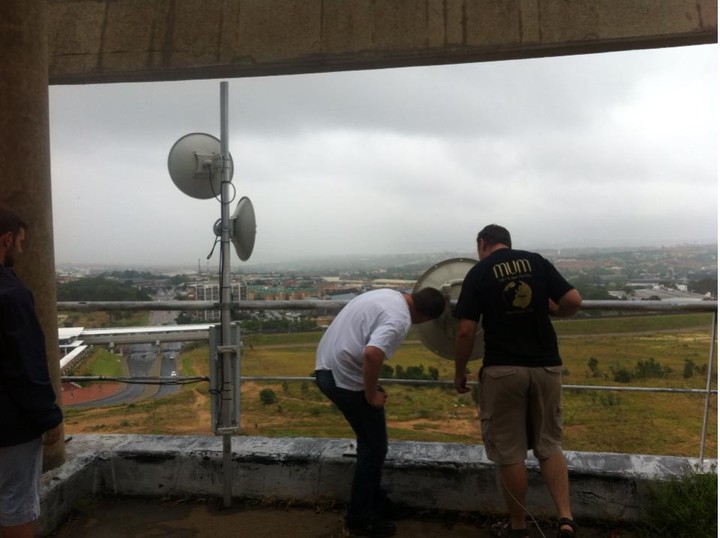 Johannesburg Wireless User Group began as hobby-turned-university project by four individuals in 2001. It had hundreds of participants at the height of its popularity, although its numbers have dwindled. JAWUG uses widely available standards-based radio frequency technology on a license-free frequency. It aims to create a community-owned wireless network. Free-to-use by non-members, JAWUG has a voluntary membership fee used to defray some of its operational costs. By 2017, JAWUG saw its user base dwindle to about 15 people, with a core group of eight who work to maintain the network’s functioning. JAWUG is an example of a membership-model community wireless network sustained long-term by dedicated enthusiasts, but has seen membership decline as Internet access became more ubiquitous and cheaper from commercial providers.

Johannesburg, the biggest city in South Africa and its economic hub, is one of the 50 largest urban areas in the world has a population of more than 4.43 million, according to the 2011 census. The city lies in the Gauteng province, which experienced a spike in the number of free Internet providers. Now, 80 percent of the country’s 2,100 public hotspots are deployed in the province. The majority of households use cellular data to connect to the Internet, and the ratio of cellular telephone subscriptions to people is 1.5:1.

South Africa has focused on information and communications technology (ICT) development in Johannesburg, which also benefits from very competitive mobile prepaid rates. Broadband in the county as a whole, however, remains expensive compared to other developing nations. Broadband subscription penetration is low, namely 5.3 subscriptions per 100 people, and speeds are not commensurate with cost. With an eye toward developing better broadband infrastructure, the government’s “South Africa Connect” project set two goals: 90 percent of the South African population should receive Internet at 5 megabits per second (Mbps) and 50 percent of the country’s population should connect at average speeds of almost 100 Mbps. The Johannesburg municipality has plans to install 1,000 Wi-Fi hotspots as well, and is contemplating a 900-kilometer-long network for households.

JAWUG is a nonprofit, community-maintained network in Johannesburg, South Africa, that has operated since 2001. Users maintain their own hardware; beyond this, the only cost is a small annual membership fee of approximately US$ 30. The network uses a license-free radio frequency, and functions via a series of antennas or “high-sites” set up in line of sight with each other. The intent is to create a backbone for a community-owned and community-maintained wireless network. Interested individuals who want to become involved check a database to see if one of JAWUGs eight high sites or another user’s antenna is in a direct line of sight to where they would set up their own antenna. Users who connect directly to high sites can see speeds of up to 300 Mbps; however, general speeds vary, sometimes being as slow as 2 Mbps.

JAWUG does not provide Internet service, but they do offer members industry recognition through their ties to groups such as the Internet Service Providers Association (ISPA). At its current capacity, it costs less than US$ 1,000 to run JAWUG annually, and is run by a core group of eight volunteers. Setting up a high-site costs between US$ 800 and US$ 1,200, which is paid for through membership dues as well as fundraising from the community and potential future community members (e.g., those who live in line of sight to a new high-site).

While successful for a time, JAWUG is only used by a skeleton crew of its former population. Originally the brainchild of four university students seeking to create a single tower to determine if their idea was viable, JAWUG consisted of 15 or more towers and 100-120 users at the height of its popularity. Now, the population is approximately 15 regular users as well as the eight individuals who maintain the network. The enthusiasm of this core group seems to ensure that the network will continue, however. Evidence from JAWUG’s Facebook page seems to show a small trickle of newly interested parties as well as users who, having moved, are interested in attempting to reconnect. In its current form, it is primarily used for networked online gaming sessions, such as massive-multiplayer online role-playing games (MMORPGs). There are currently eight high-sites, many having been decommissioned after being destroyed by lightning.

In addition to the success of testing the viability of using the technology they employed, one of JAWUG’s major outcomes was improved technological literacy of those who became involved with the project. Many who worked on JAWUG have continued on to corporate careers in the fields of information technology and computer science. Yet, the general hobbyist bent of the project also drew interest from individuals whose vocations had little to do with ICTs. For many, joining the JAWUG network was an introduction into network science.

The size of the community around the network has dwindled as Internet service became more pervasive and cheaper in Johannesburg. Commercial providers offer simpler solutions that consumers are more comfortable with. Though JAWUG has seemingly become superfluous in a competitive Internet service provider (ISP) market such as Johannesburg, it was originally intended as a community, not an Internet portal. Albeit small, the remaining users have been considerably successful in this community.

Lack of trust – People were distrustful that the network was “free,” and were mistrustful of the founders. The open nature of the network also allows for the potential of abuse. Individuals take advantage of the infrastructure created by the original project for their ends.

Lack of a business model – Some participants did not realize that JAWUG was not providing an Internet gateway. Others would complain when aspects of the network failed, often not realizing the voluntary nature of the deployment.

Regulation – South African regulations prevented JAWUG from providing Internet over the network without a license. The organization faced pressures to become an ISP, and disregard the illegality of the action. JAWUG choose not to, however, and it was eventually granted an exemption license contingent on its continued status as nonprofit.

Rough weather – Many of the high-sites had to be decommissioned because they were struck by lightning. Because the technology relies on maintaining a line of sight, both weather and topography can present challenges.

Users can provide insightful feedback for sustainability and growth – JAWUG notes that users can provide insightful feedback for augmentations and quality assurance. Their experience demonstrates the value of end user input. In addition, the nonprofit nature of the venture dictates that participants have useful expertise beyond the realm of information technology, and this can be a useful cost-cutting measure (e.g., JAWUG’s accountant is a community member who donates time). Finally, identifying potential future users by their adjacency to new high-sites may add value, and reduce costs of new towers through donations.

Success is need-dependent – At the time of its implementation, JAWUG filled a void since wireless Internet in Johannesburg cost approximately US$ 100 a month. As the marketplace improved, extra labor needed to set up and connect to JAWUG was less attractive to potential new users. For this reason, the popularity of JAWUG peaked and has fallen ever since.