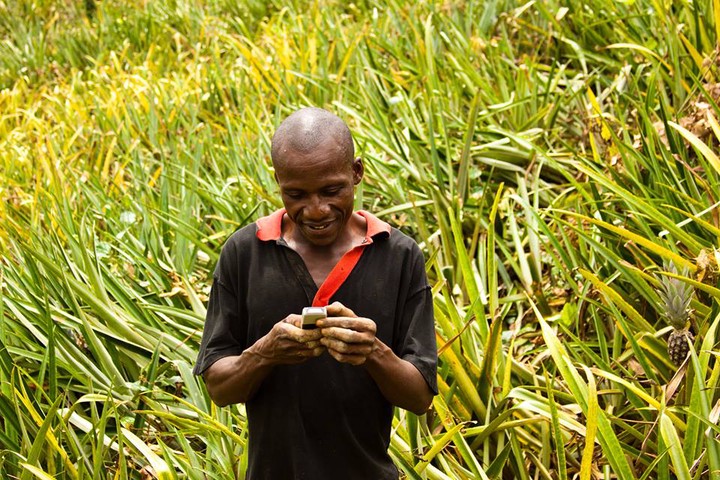 Esoko launched in 2005 and seeks to capitalize on increased mobile phone uptake across Africa to use information and communications technologies (ICTs) to help farmers improve their incomes. They started by sending voice and text messages to small farmers containing information on agribusiness, including weather and pricing, and linking farmers to buyers. They are now expanding the project to establish digital footprints within rural communities throughout Africa. They collect data from these communities (biometrics, GPS, and mobile money data) to form a database that can be used in a targeted way to connect users to specific services of interest (e.g., healthcare, business, e-governance, e-commerce, etc.). The project serves small farmers and rural communities in Ghana, Tanzania, Malawi, Burkina Faso as well as in Mexico.

Statistics from the United States’ Global Hunger and Food Security Initiative estimated that agriculture accounted for almost 30 percent of gross domestic product (GDP) in East African countries. It employs more than 60 percent of the region’s population, with staple food dominating the total traded agriculture products (75 percent). Although traditional agricultural practices passed down through generations are still prevalent, farming technologies developed by locals are also on the rise, providing effective solutions to smallholders. Increased phone use in East Africa has facilitated technology to expand its impact on agricultural practices.

Both the public and the private sectors in East Africa are spearheading the efforts to transform the agriculture sector. Kilimo Salama, a microinsurance company, has been providing a completely automated, “pay-as-you-plan”-type of insurance that protects farmers against bad weather. The World Cocoa Foundation created the app CocoaLink to provide free voice and text messages in English and local languages about farm safety, child labor, tips for farming practices, and crop marketing for Ghanaian farmers. In 2017, MasterCard launched a new digital marketplace for East African farmers to sell their crops and receive payments via their mobile phones called 2Kuze.

Esoko started in 2005 as an experiment to see how the emergence of mobile technology in Africa could improve the lives of rural communities across the continent. The first project enabled the delivery of market prices via Short Message Service (SMS), in support of work that FoodNet was doing with the telecommunications operator MTN in Uganda. In addition, Esoko set up a call center to support local languages and address issues with literacy. Over time, they realized farmers needed much more than price information, and added weather alerts, crop advice, and linked buyers with sellers. The company then leveraged its technical platform and field force for the collection of information, mostly using tablet devices and smartphones. This technology, Insyt, became the backbone of many large scale social protection programs in Ghana – helping agencies convert from paper, thus reducing cost, time and errors, in targeting beneficiaries. In 2016, Esoko incubated and spun-off Tulaa into a sperate company, a virtual marketplace, which provides smallholders with access to inputs and finance. As a growing social business, Esoko reinvests the majority of its returns into the business, to scale quickly, and maximize its impact on rural communities. Esoko is committed to improving income for rural communities by empowering them, and the businesses that serve them, through mobile technology. The project is deployed primarily in Ghana and Tanzania, with resellers in Malawi, Burkina Faso and Mexico. Users are rural populations and smallholder farmers.

Under the Vodafone Farmers Club VFC of Ghana, market prices and farmer information costs a small fee, which is paid via mobile phone credit, and typically runs approximately 2 cedis (US$ 0.50) per month for weather and market information as well as agricultural tips. Outside the VFC program, market price alerts cost US$ 10 per month, with weather and agric tips costing US$ 0.04 and US$ 0.02 per alert, respectively. This cost is usually taken up by development projects looking to help smallholder farmers.

Esoko sends field agents to project beneficiaries and sites of interest for one day at a time in order to conduct trainings. They train in basic ICT literacy, including how to use the basics of the mobile phone, such as checking messages, as well as more sophisticated use of apps. When they profile farmers, they also record the preferred languages for each user so when the user calls the call center, they are automatically re-directed to a speaker of their native language. The call center will translate text messages to voice memos and also translate between languages. They train them at a basic level to simply identify messages from the service so that they can then call in for more specialized assistance if needed.

Since its inception, the project has expanded its mission considerably. Initially devised to serve smallholder farmers in rural Africa, the project now reaches rural communities in general. Although the Esoko communication platform has been deployed in over 10 countries worldwide, most users are currently in Ghana, followed by Mexico.

The organization plans to scale up across many more countries across Africa to serve even more rural populations. They plan to do this by partnering with government and private stakeholders, and they plan to sustain the project by connecting service providers with the database of biometrics and other data they collect from their users.

Currently, the organization hosts 2.5 million user profiles across Ghana, Tanzania and Mexico. Of those, Esoko has about 700,000 users’ biometric profiles. They also offer GIS mapping, where more than 104 acres of farms have been mapped as of early 2018.

Low levels of traditional literacy ­– Getting someone to identify a text message is difficult among the target populations that Esoko works with. There are variable levels of literacy between sites and communities, so the project has to be adaptable to different user needs and levels.

Lack of telecommunications infrastructure – Esoko targets rural areas that are hard to reach in person and hard to support technologically. Sending messages to rural areas is sometimes difficult because of the limited ICT infrastructure. To work around this, they developed apps that can work offline and can sync later when connectivity is available.

Social norms – The transition to mobile banking is difficult for those who are used to paper money. It seems too abstract, and there is resistance to using tech to replace previous transaction styles.

Investing in enhancing the basic as well as digital literacy levels of target populations may be essential for the growth of information-based tools such as Esoko ­– There is a need for more support for digital literacy in general, but also for basic literacy and for systems to sustain farmers’ knowledge acquisition and transfer.